The Mystery of the Shag Harbour Incident

The landscape of UFOlogy is littered with an array of stories of the strange and outlandish. This area is by nature a wellspring of high strangeness, the bizarre, and reports that often seem to defy all attempts to categorize them. Among these the most unusual seem to be those cases in which an unidentified object has come hurtling down from the heavens to crash, and there is a surprisingly high number of such otherwordly tales. One of the more well-known and oft-discussed of these is a mysterious event that unfolded in the remote wilds of Nova Scotia, Canada, and which has attracted much attention from UFOogists and remains unsolved to this day.

It was the evening of October 4, 1967, and the day had come to an end at the tiny, rustic fishing village of Shag Harbour, tucked away in the Canadian province of Nova Scotia and surrounded by scenic vistas. The sun went down, and the evening was just like any other, until at 11:20 PM something very strange happened at this isolated place. Up in the sky there was a sudden bright flash, and four brilliant lights that travelled over the area for nearly an hour, until a bright object suddenly dipped down to go crashing into the water with great force. Some people would claim that the anomalous object had made an otherworldly whistling noise as it descended, to punctuate its landing with a loud, reverberating boom, while others reported that the object seemed to flash a sequence of lights before its fall. One witness named Laurie Wickens would later say of it:

We see four lights in the sky and over the land here. We thought it was a plane and never paid no attention – more or less just watching lights go on and off. It went across the road in front of us, behind the hill – we couldn’t see it. We made it to the top of the hill. There was a light in the water. We went to the phone booth, called the RCMP (Royal Canadian Mounted Police) and reported a plane crash.

Wickens would add that the mysterious craft had floated about in the water around a half mile off shore while trailing a strange yellowish substance, bobbing along for nearly an hour before sinking down into the depths, and there were several RCMP officers who saw the floating object as well. In all, at least eleven people would flood the RCMP with reports of having seen essentially the same thing, a bright light whizzing across the sky to crash into the sea, and it was at first assumed to be an airplane crash. In response, both local fishermen and the RCMP immediately launched a search and rescue operation, quickly arriving at the scene where the object had supposedly gone down, joined by the Coast Guard, but there was no wreckage or sign of the aircraft other than an unusual yellow foam found swirling about in the waves.

Interestingly, it would be found that there were no aircraft reported missing, and that indeed all commercial, private and military aircraft were totally accounted for all along the eastern seaboard stretching down through New England. Simply put, if this had been a plane, then no one knew who it was or where it came from. The mention of the lights and behavior of the craft before impact, as well as the lack of any missing aircraft and the fact that it did not sink right away, led RCC Halifax to pass along the strange incident to the "Air Desk" at Royal Canadian Air Force headquarters in Ottawa, where it was labelled as a UFO report. It was at around this time that the military moved in, with a Navy ship and divers from the Royal Canadian Navy and the Fleet Diving Unit Atlantic arriving on the scene to search the depths for a full three days, scouring the entire area, although their official report would claim that they had found nothing at all, no bodies, no wreckage, nothing. Of course, there were some witnesses who would step forward to claim that the Navy had indeed found something, and that it had been whisked away, but there is nothing to verify this.

In the meantime, the story was hitting the news in a major way, and there was much talk about the possibility that this had not been a plane at all, but rather a crashed UFO. Feeding into this idea were several other UFO sightings that had been reported in the same general area in the days leading up to what had been dubbed “The Shag Harbour Incident” and could be related. In one report, on the same evening at 7:15 PM Air Canada flight 305 reported that they had spotted a brilliantly lit, rectangular object with smaller lights behind it pacing their plane about a mile off, before they witnessed a large explosion, followed by another apparent explosion, although these produced no noticeable sound. Could this have been the craft that went down? In another, Capt. Leo Howard Mersey, of the fishing vessel MV Nickerson, had picked up four anomalous objects on radar, after which the entire crew had seen a formation of four bright lights in the sky. 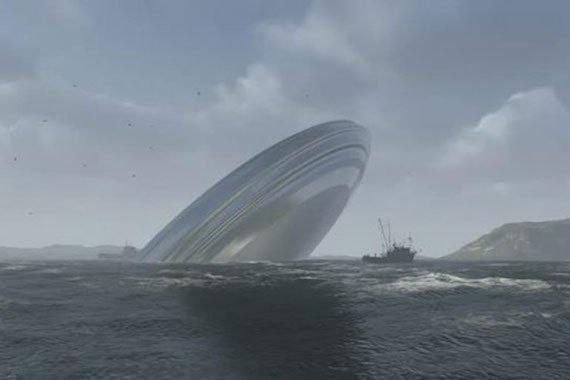 It would turn out that there had been several other reports of strange lights in the skies of the area in the hours leading up to the crash, which only served to fuel the fires of discussion that this had been no airplane. This would help the incident launch itself firmly into the UFO discourse, and it would become a classic case of a possible UFO crash, surrounded by mysteries and conspiracy theories. The case would go on to be investigated by the Royal Canadian Mounted Police, Canadian Coast Guard, the Royal Canadian Air Force, the Canadian government, and the U.S. Condon Committee, making it one of the most well-documented cases of what officially remains a UFO out there.

The incident has gone on to become a part of local and Canadian UFO lore, to the point that there is an annual two-day Shag Harbour UFO festival, as well as a limited edition series of glow-in-the-dark coins depicting the incident that were released by The Royal Canadian Mint that sold out nearly immediately. The case has become a classic, iconic addition to theUFO lore, very well documented, and still no one really has any idea of what exactly transpired on that fateful evening. Was it aliens, meteors, a downed satellite, or what? Did the government cover it all up to relegate it into the dark recesses of history? No one really knows, and the Shag Harbour Incident remains a much talked about case within the annals of the strange.