Still on the matter of simulated UFO events, let's take a look at the famous Rendlesham Forest UFO incident that occurred in Suffolk, England in December 1980. Could that have been such a simulation? Maybe. Between December 26 and 29, 1980, multiple UFO encounters occurred within Rendlesham Forest, Suffolk, England that involved American military personnel from the nearby Royal Air Force stations of Bentwaters and Woodbridge. According to numerous U.S. Air Force operatives, a small, triangular-shaped object was seen maneuvering in the forest. And although the incident has been the subject of a significant number of books, intense media coverage and even parliamentary questioning, it continues to provoke furious debate within the UFO research community. I suggest it might be worth looking at an aspect of the affair in the forest of which few have taken much, serious notice – and of which many are simply unaware. It’s an aspect that implicates staff from one of the U.K.’s most secret installations. 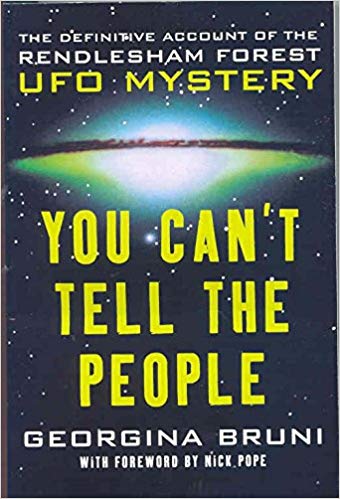 In her book on the Rendlesham affair, titled You Can’t Tell the People, the late Georgina Bruni reported on a fascinating story: shortly after the events at Rendlesham Forest took place, a number of personnel from the top secret Wiltshire, England Porton Down facility were reportedly dispatched to the forest. Dressed in full-body protection (hazmat) outfits, no less, they entered the woods – for reasons that remain unknown outside of officialdom. Prior to her death, Georgina confided in me the name of her source; it was a woman who was indeed a prime candidate to comment on matters relative to the work of staff at Porton Down. Notably, on January 11, 2001, the late British Admiral of the Fleet, Lord Hill-Norton, who had a personal interest in UFOs, tabled questions at an official level with British authorities in an attempt to resolve the issue of the Porton Down allegations as they related to the Rendlesham case. Predictably, the response to Hill-Norton’s questions, that surfaced on January 25, 2001, was to the effect that staff at Porton Down had made a check of their archives but didn't find anything relevant.

Let's take a closer look at the work and history of Porton Down. As the BBC note: "Porton Down was set up in 1916. It was a center designed to test chemical and biological weapons. Nerve gases such as Sarin and CS gas were tested on volunteer servicemen. Servicemen were offered around £2 and three days leave as an incentive to take part in tests. Very few servicemen knew what they were volunteering for and some were even told it was research into the cure for the common cold. In 1953 it is alleged that serviceman Ronald Maddison died after taking part in a Sarin gas experiment. In 1962, one of Porton Down's own scientists, Geoffrey Bacon died of the plague. Since the end of WWII, 20,000 people have taken part in experiments at Porton Down."

LSD was tested at Porton Down, too. On military personnel, no less. And as the Guardian newspaper stated in 2005: "Fifty years ago, Eric Gow had a baffling and unexplained experience. As a 19-year-old sailor, he remembers going to a clandestine military establishment, where he was given something to drink in a sherry glass and experienced vivid hallucinations. Other servicemen also remember tripping: one thought he was seeing tigers jumping out of a wall, while another recalls faces 'with eyes running down their cheeks, Salvador Dalí-style.' Mr. Gow and another serviceman had volunteered to take part in what they thought was research to find a cure for the common cold. Mr Gow felt that the government had never explained what happened to him. But now he has received an official admission for the first time, confirmed last night, that the intelligence agency MI6 tested LSD on servicemen."

Maybe, the Rendlesham affair was not a UFO incident, after all. In terms of getting the answers, perhaps we should be focusing on (A) that intriguing Porton Down presence in the woods in December 1980 and (B) mind-altering technology tested under the banner of an alien event. After all, if you're under the influence of something that can have you seeing "tigers jumping out of a wall," then maybe seeing something akin to an extraterrestrial creature may not be so strange, after all.

A Serpent Demon and a Fatal Exorcism in London