The Strange Case of the Witch Nanny of Italy

It started innocently enough. It all began as a charming adventure for 20-year-old Scotland native Carole Compton. In her native Scotland she met and fell desperately in love with an Italian man by the name of Marco Vitulano, who she met as he was working as a waiter at the at Turnberry Hotel in Ayre, and she was by all accounts completely swept off her feet. Caught up in her whirlwind romance, when he left to return to his country for mandatory military service and invited her to come live in Italy to be near him, she was immediately ready to drop everything and leave her whole life in Scotland behind. As she prepared to move off to this exotic new land to be with her lover it was very much a fairy tale dream come true, but unfortunately for her it would end up turning into a nightmare, and a rather bizarre tale of archaic beliefs, black magic, demons, and witchcraft that is still discussed to this day.

Compton arrived in Italy in 1982, and began looking for work to sustain herself on this new life adventure. She would find it as a live-in nanny, working at the home of the wealthy Ricci family in Rome, caring for the busy family’s 2-year-old son and managing the house during their frequent business trips. At first it all went rather smoothly, but several days later things would take a turn for the odd when a religious painting just happened to fall from the wall and crash at Compton’s feet, which was witnessed by the house maid. This would probably normally not be such a big deal, but the superstitious and highly religious maid began to suspect it was something more than an accident, even going as far to inform the Ricci family of the incident and expressing that she believed there was something off about Compton.

Nevertheless, at this point nothing really came of it, and indeed Compton was invited to come along with the family on a vacation to their luxurious vacation home in the Italian Alps. It was meant to be a scenic and relaxing getaway, but as they were there a fire broke out on the second floor of the house and nearly burned it all to the ground, cutting the vacation plans short. When they returned to Rome, so did the fires, with various small blazes breaking out around the house on a regular basis and reaching a crescendo with a fire consuming the bedroom of the toddler son and nearly killing him. With the maid ranting about demonic forces and how it was all Compton’s fault, the Scotswoman was fired by the increasingly paranoid and scared family.

Compton resumed her search for a new nanny position, and this time found a job with the Tonti family at their home on the picturesque island of Elba, in Tuscany, Italy. As before, things started off just fine, but after a few days it was noticed that religious paintings would fall off walls when Compton was around, and other religious paraphernalia would also move, be knocked to the floor, or even be flung across the room when she was in the vicinity. The family grandmother became convinced that Compton was a witch, and this only seemed to make the paranormal activity even more intense, with furniture moving, electrical disturbances at all hours, and anomalous thumping and scratching sounds on the walls at night that even Compton herself would claim to have heard. In addition, religious objects such as crucifixes began to be found bent, broken, or twisted, and the religious family became absolutely terrified of this young Scottish woman.

The whole thing reached a head when, as with the Riccis, fires began to break out around the home, culminating in a fire burning the cot of the family’s 3-year-old daughter, luckily without the child in it. The frightened family were now convinced that Compton was imbued with demonic powers, and police were called to arrest the “witch.” Authorities linked the Tonti fire back to the Ricci fires, and Carole Compton was then arrested and confined on suspicion of arson and attempted murder, although the media was quick to play up the angle that Compton was the “Witch Nanny” and had supernatural powers, turning it all into quite a media circus. Through it all, Compton adamantly denied any wrongdoing at all, and strongly dismissed any suggestions that she was a witch, although she was just as puzzled about why the strange activity and fires had followed her around as anyone else, and just as frightened by it. 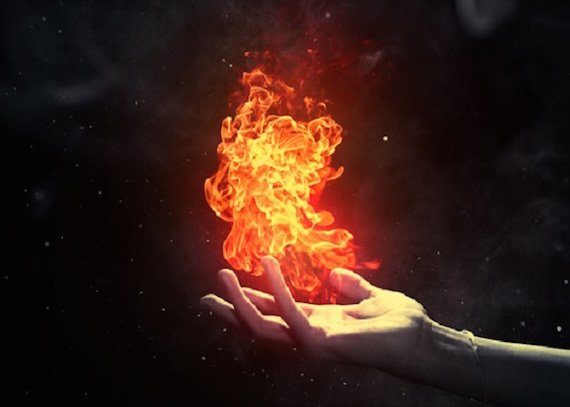 Carole Compton, the “Nanny Witch” was soon worldwide news, all while the woman languished in jail for a full 16 months to await her trial without even being charged. When the trial came around, it was every bit the freak show that the news had hyped it up to be. Compton was brought into the courtroom in a locked iron cage on the insistence of frightened pleas that this was the only way to contain her dark powers, and there were priests there in case an exorcism was needed, as well as various protective talismans, crucifixes, and amulets on display by both panicked spectators and court employees. On one occasion during the show, a crazed faith healer named Chiara Lobina rushed forward to try to perform an exorcism and was forcefully ejected from the courtroom, and the whole scene was somewhat of a farce, something that would have seemed more at home in the 15th century than in a proper modern day courtroom.

Although she was found innocent of attempted murder, Compton was found guilty of two counts of arson, despite the fact that no witnesses had actually seen her physically start a fire, there was no evidence, and there was no established motive. The testimony by experts was also rather lacking, as they merely called the fires “anomalous” and did not provide any evidence for how Compton had possibly started them in the first place. She was nevertheless sentenced to two and a half years in prison, which was considered time served and she was free to go. The case was highly scrutinized and brought much pressure on the Italian legal system in general at the time, branded as a bona fide modern day witch trial, although the actual official charges were not technically for witchcraft. It also highlighted just how much superstition and folklore were still ingrained in the country, showing that even in the modern age these beliefs in black magic and witches were still very much alive. Compton herself would return to Scotland and try to put it all behind her, eventually writing a book on her experiences called Superstition: The True Story of The Nanny They Called A Witch.

The case has remained rather an enigma ever since, and is still discussed to this day, mostly concerning what really happened. Regardless of Compton’s innocence we are still left with the fact that the unexplained fires really did happen when she was working for these families, and there are people who claim that there were strange anomalous sounds and moving objects, including Compton herself. Ideas for the origins of these mysteries run the gamut from the mundane to the more bizarre.

The most rational explanation is that the fires were caused by faulty wiring or even cigarette butts that had not been properly put out, yet why did they happen to spring up when Compton was around? A more paranormal explanation was proposed by Compton herself, when she wrote in her book that she believed that it was poltergeist activity, which would explain the fires, moving objects, and even why the episodes seemed to grow in intensity as the atmosphere grew more panicked. This idea of poltergeists being the cause was supported by English parapsychologist Guy Lyon Playfair, who thought it perfectly explained the phenomena. Yet another idea is that this was some latent ability of pyrokinesis, or the ability to mentally start fires, which might have manifested in Compton due to the stresses of being in a new environment. Was this ghosts, misunderstandings, or what? Whatever the case may be, the story of Carole Compton has become a rather bizarre tale still raising eyebrows to this day, and is an oddity that one hopes will not be repeated anytime soon.