Some of the most spectacular UFO accounts come from pilots and aircraft. These are the witnesses that seem to know what they are talking about, who are familiar with the skies and the various phenomena associated with them, and reports of strange unidentified objects from such witnesses always capture attention. One of the most well-documented such accounts on record comes from a crew aboard a Japanese airliner flying over Alaska, and it has gone on to become a much discussed entry into the realm of airborne UFO sightings.

It was November 17, 1986, and Japan Air Lines flight 1628, a Japanese Boeing 747-200F cargo aircraft, was on its way from Paris to Narita International Airport, in Japan, with a cargo of Beaujolais wine. The flight was overseen by Japan Airlines Captain Kenju Terauchi, an ex-fighter pilot and senior airline pilot with more than 10,000 hours flight experience, and everything was smooth at the start. The plane took off on schedule and made its way towards its destination, a route which would take it over a portion stretching from Reykjavík to Anchorage, Alaska. It was here in these skies that the routine flight would take a turn for the decidedly unusual.

At approximately 5:11 PM, the plane was passing over eastern Alaska when some of the crew made an observation of two unidentified objects on the left of the aircraft, described as having rectangular arrays of thrusters that appeared to be glowing. The objects seemed to be square shaped and somewhat cylindrical, and were keeping to the cover of the clouds and darkness, yet undeniably were apparently pacing the plane, suddenly rising with great speed to approach the plane, getting so close that the interior of the aircraft was illuminated by their glow and the heat emanating off of them could be felt. The alarmed Captain Terauchi made a series of panicked calls to the Anchorage Air Traffic Control Center to see if there were any other aircraft in the area, to which they responded that there were none showing up on radar. It was about at this point that the two unidentified objects began to dart and move in a very erratic manner, and a much larger craft also would loom into view behind them. Terauchi would say of the weird encounter:

The distance from the lights was far enough from us and we felt no immediate danger. I thought perhaps it is a UFO. The lights were still moving strangely. Most unexpectedly two spaceships appeared [directly in front of the plane], shooting off lights. The inside cockpit shined brightly and I felt [the warmth of the UFO’s thrusters’] on my face. Then, three to seven seconds later, the fire — like from jet engines — stopped and became a small circle of lights as they began to fly in level flight at the same speed as we were. The middle of the body of the ship sparked an occasional stream of lights, like a charcoal fire. Its shape was a square, flying 500 feet to 1,000 feet in front of us, very slightly higher in altitude than us. Its size was about the same size as the body of a DC-8 [similar in size to a Boeing 707].

It is impossible for any manmade machine to make a sudden appearance in front of a jumbo jet that is flying 910 kilometers per hour and to move along in a formation paralleling our aircraft. But we did not feel threatened or in danger. Honestly, we were simply astounded. I have no idea why they came so close to us. There was a pale white flat light in the direction where the ships flew away, [pacing us]. The Anchorage Center replied that they saw nothing on their radar. I set our digital weather radar distance to 20 miles, radar angle to horizon. There it was, on the screen: a large, green, round object had appeared seven or eight miles away, in the direction of the object. We arrived at the sky above the Eielson Air Force Base and Fairbanks. It was a clear night. We were just above the bright city lights and we checked the pale white light behind us. There was a silhouette of a gigantic spaceship! We must get away quickly! 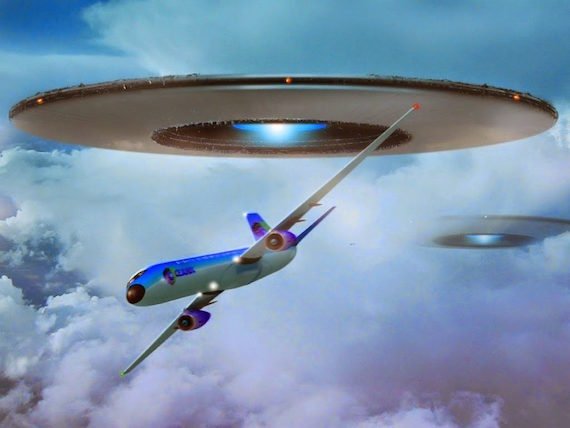 The larger craft was described by Terauchi as “a mothership,” and reported as being twice the size of an aircraft carrier, looming out there on the horizon and pacing the airplane. Throughout the whole ordeal, the original lights were displaying feats of maneuverability that were well beyond any known aircraft, seeming to defy gravity, and Terauchi would say of this:

The thing was flying as if there was no such thing as gravity. It sped up, then stopped, then flew at our speed, in our direction, so that to us it [appeared to be] standing still. The next instant it changed course. In other words, the flying object had overcome gravity.

In the meantime, Air Traffic Control was unable to register anything on their radar to confirm any of this, although Elmendorf's NORAD Regional Operations Control Center (ROCC) did manage to pick up a "surge primary return” in the area. Terauchi carried out evasive maneuvers, changing altitudes and moving about in circles, but the strange craft easily managed to match them and continue to follow, and when offers were made to scramble military jets the Captain refused, not sensing that there was any imminent threat. The objects would continue their inscrutable activities until a United Airlines passenger jet entered the airspace around 150 miles from Anchorage and purportedly sent the UFOs scattering off into the unknown. Flight 1628 would land safely, and Terauchi and his crew, co-pilot Takanori Tamefuji and flight engineer Yoshio Tsukuba, would file a report with the Federal Aviation Administration on what they had witnessed.

The bizarre account would get out into the press, and interestingly Captain Terauchi would be grounded in response, relegated to a desk job, which only stoked the fires of conspiracy talk. John Callahan, the FAA Division Chief of the Accidents and Investigations branch, launched an investigation and would turn up some interesting findings, such as evidence that showed that the objects at some points had been clocked at moving thousands of miles per hour. Callahan would apparently have a meeting attended by representatives of the FBI, CIA and President Reagan's Scientific Study Team, during which the data was met with excitement according to him. He would say:

When they asked me what I thought, I told them that it looked like we had a UFO that was up there. As far as I was concerned, Reagan’s science team were the ones that verified my own thoughts about it. They were very, very excited about the data. They had said at that time that this was the was the only time — and they had used the words ‘a UFO’ — was ever recorded on radar for any length of time. 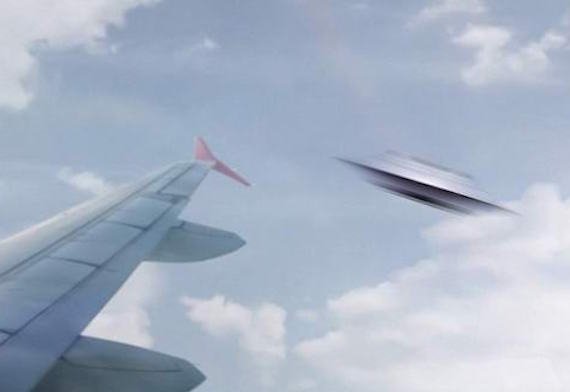 Regardless of this, it was allegedly decided to basically bury the data on the incident and all present were told to act as if the meeting had never taken place at all. Not only this, Callahan would claim that the officials had confiscated all of the data and whisked it away, although he managed to squirrel away the initial pilot’s report. The FAA would conduct a 3-month investigation into the incident, and after it wrapped up there would be a fair amount of backtracking, such as claiming that the military radar signatures had been caused by technical difficulties and a “split radar image,” and that there was no evidence at all that anything had been there.

The case has ever since been picked up and hotly discussed in UFO circles, where various hypotheses have been thrown about. The skeptical argument is that the crew had been disoriented and had misidentified Venus or Mars, both of which had been unusually bright at the time in question, or that they had been reflections on cloud cover or the result of optical illusions caused by ice crystals. However, we must remember that these were experienced pilots and that there was mention of actual heat from the UFOs permeating the air around them. Another skeptical argument is that Captain Terauchi had already established himself as being a UFO believer, having logged several other sightings during his tenure with the airline, and so it is suggested that perhaps he was not a totally unbiased observer, but here the phenomenon was witnessed by other crew as well, who corroborated the story, although it is only Terauchi who apparently saw “the mothership.” The exact details of the meeting allegedly attended by Callahan have never been officially released or corroborated either, further muddying the waters.

What did Japan Airlines Flight 1628 see, if anything? The theories have orbited the case of course, including that this was some sort of top secret stealth technology or experimental aircraft being tested, that it was actual aliens, or that it was nothing more than Venus or ice crystals. The intriguing thing here is the meeting that supposedly took place afterwards and the unceremonious grounding of the pilot who logged it all. Is this evidence of a cover up, or something else? Regardless of what is really going on here, the case has become one of the most oft-discussed and pervasive in UFO literature, and stands tall among the numerous accounts of pilots having brushes with the unknown.