The Strange Mystery of the Crawfordsville Monster

Some reports of mysterious creatures really seem to take the bizarre and turn it up a notch. These are the reports that seem to come from nowhere and then disappear into the ether just as quick, leaving us to scratch our heads and wonder just what in the world it is all about. They are the uncategorizeable, truly outlandish reports that skirt around the very fringes of the odd, and one of these must certainly be the time a giant, snakelike monster flew around over the skies of the U.S. state of Indiana.

On September 5, 1891, two ice delivery men by the names of Marshall McIntyre and Bill Gray were up early on a cold morning at approximately 2 AM, hitching up their horses in order to go make their day’s deliveries in the town of Crawfordsville, Indiana, in the United States. It was cold, mundane work, just like any other day, but on this occasion things would take a bizarre twist when the men noticed something odd up in the sky coming into sight looming over a nearby barn, just as a wave of “awe and dread” washed over them. As it came more fully into view, the object in the sky proved to be some sort of hideous apparition, which looked very much like a large white shroud, somewhat eel-like or serpentine in general shape, with flapping side wings and fins, and a single huge flaming eye. The Crawfordsville Journal would later describe the otherworldly beast thusly:

It was about eighteen feet long and eight feet wide and moved rapidly through the air by means of several pairs of side fins which it worked most sturdily. It was pure white and had no definite shape or form, resembling somewhat a great white shroud fitted with propelling fins. There was no tail or head visible but there was one great flaming eye, and a sort of a wheezing plaintive sound was emitted from a mouth which was invisible. It flapped like a flag in the winds as it came on and frequently gave a great squirm as though suffering unutterable agony. 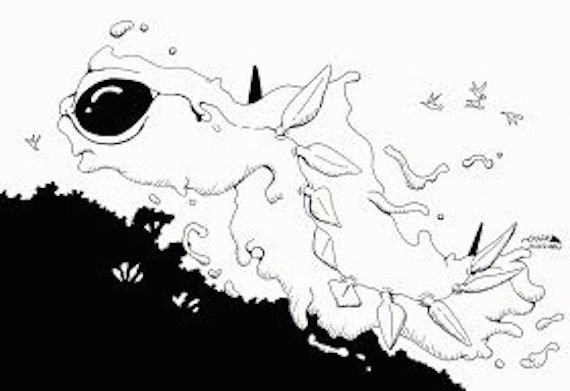 The horrifying sky-bound abomination apparently moved rapidly through the air about 300 feet up, approaching the barn to begin doing circles over the area. The men were startled and not a little frightened at this point, and they cowered within the barn not knowing whether the strange creature meant to swoop down and attack them or not. Occasionally they would peer out of the murk of the darkened barn to find it still doing its lazy circle over the property, staying there for a full hour before moving off out of sight. The next morning the men reported their harrowing encounter and it would be published in papers such as the Crawfordsville Journal and the Indianapolis Journal to great curiosity.

Amazingly, far from just some one-off freak sighting, there would be other reports of seeing what appeared to be the same thing. Two days after this initial sighting, G.W. Switzer, who pastor of the First Methodist Church, was out collecting water from his well shortly after midnight when he was overcome by an odd sensation of dread and a tingling in his body, which caused him to look up to see a 16-foot-long creature hovering through the air that looked like “a mass of floating drapery” that “swam through the air in a writhing, twisting manner similar to the glide of some serpents.” The startled pastor shouted for his wife, who would come running and see it as well. They watched with a mixture of wonder, awe, and fear as it circled over the property, at one point dropping so low to the ground that they feared it was about to land, before heading off into the distance. The pastor insisted that it had not been a cloud, and that it had been a still and windless night. It was deemed completely inexplicable.

At the time this report had quite an impact, as Switzer was considered a well-respected member of the community and a solid, reliable witness, and it all was enough to cause a bit of a minor panic. The Crawfordsville Postmaster would be flooded with additional reports from dozens of terrified people claiming to have seen the very same thing, with some saying that they had gotten so close to it that they could feel the heat of its breath, and according to Vincent Gaddis of the Fortean Society there would be hundreds of eyewitness reports such as these. Others were not as convinced, writing it off as delusions and the effects of perhaps having had too much to drink, yet there were enough people who believed it all that it made waves at the time.

In later days there would be somewhat of an explanation offered, when two men by the names of John Hornbeck and Abe Hernley saw what they at first believed to be the monster, but would find to be merely a large flock of a type of bird called killdeer. It would be surmised that the white underbellies of the birds and dark conditions of the sightings had caused the witnesses to misidentify the birds for something more fantastical, and that the flocks had been so large because the town’s new electric lighting system had both drawn them in droves and disoriented them to cause erratic behavior and flight patterns. Another possible explanation that was put forward was that people had been seeing balloon parachutes, which had become popular among young boys in the area. 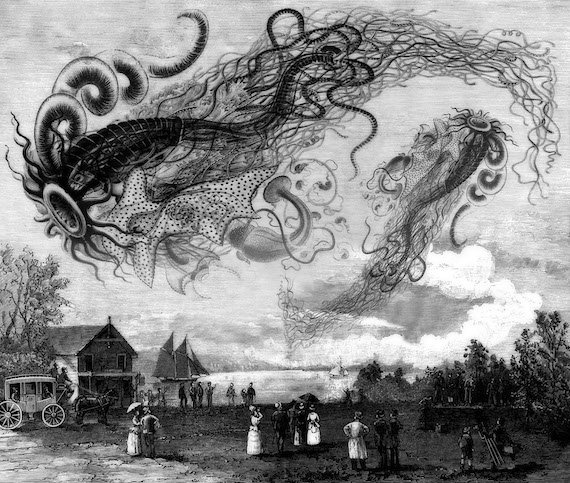 This seems like a fairly rational possible explanation, but it was not satisfactory for many, especially for those witnesses who insisted that what they had seen was no flock of birds. The case would sort of fade away and be forgotten, but was brought back to life by none other than the legendary Charles Fort, who mentioned the case of the “Crawfordsville Monster” in his book LO! Fort would claim to have verified that at least one of the witnesses, the pastor Switzer, was a real person and not a fabrication of the papers, and it is largely due to his reopening of the case that it has managed to become a mainstay in the world of the paranormal to this day. In more recent years the Crawfordsville Monster has continued to be debated and discussed, appearing in many publications and even being mentioned in the popular TV show MonsterQuest in 2008.

So what in the world was the Crawfordsville Monster? Was it a UFO, a ghost, a flock of birds or balloons? One theory thrown about is that it could have hypothetical creature called “atmospheric beasts,” which are speculated to be airborne organisms that live out their entire lives up in the high atmosphere and which are often blamed on UFO sightings. Or was this just the result of sensationalized reports on a slow news day? Skeptics have pointed out that of the four local newspapers in Crawfordsville at the time, only one of them, the Crawfordsville Journal, actually makes any mention of the incidents, and it is from these lone reports that the story got picked up by bigger publications like the Indianapolis Journal and others. This leads to the suspicion that it was perhaps a bit of an exaggerated or even completely fabricated tale that managed to get out into the wild and take on a life of its own. Considering that this is a very old report with very little in the way of actual verification or evidence, we are left with a very peculiar historical oddity that will probably never be proven to be one thing or the other and will float around the discourse for quite some time to come.

Ancient Site Much Older Than Göbeklitepe Unearthed In Turkey