The Strange Mystery of the Phoenix Lights

Of all of the UFO sightings and encounters on record, very few can claim to have been witnessed by more than a few people at a time at best. These are typically very isolated incidents, seen by only small groups of people at most, and this has only further served to generate doubt on the part of skeptics or for those who place no veracity on UFO phenomena as a whole. Yet, every once in a while there is a truly spectacular case of a mass sighting that gets plenty of documentation and exposure, and perhaps one of the most well-known, classic accounts of this occurred in 1997, when thousands of people witnessed something unexplainable in the dark skies over the U.S. state of Arizona.

What has gone on to become one of the most well-known and oft-discussed and debated mass UFO sightings in history is widely accepted as having started on March 13, 1997 in the skies over Henderson, Nevada, in the United States. Here a witness claimed that at approximately 6:55 PM he saw a large, V-shaped object about the same size as a passenger airliner with a formation of six lights along it front edge, which flew across the sky at a good clip with a sort of whooshing noise to disappear to the southeast. This same object would soon after be witnessed by a police officer from Paulden, Arizona at around 8:15 PM, who said that he saw a triangular formation of four mysterious lights trailed by a fifth, and claimed to have watched the strange sight through his binoculars as they travelled south. 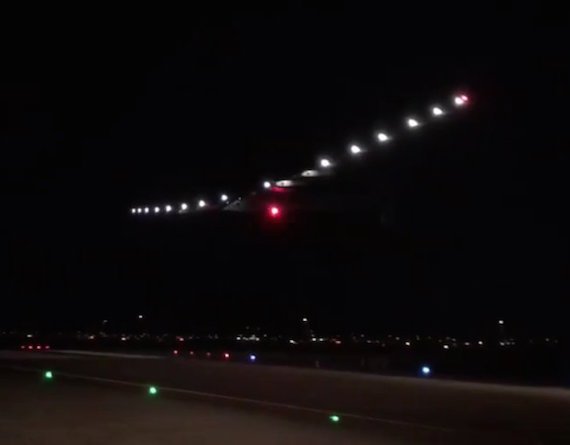 This would be the beginning of one of the most famous UFO cases there is. Before long there were sightings of something strange in the sky coming in from the area of Prescott, Arizona and the Prescott Valley. Many of the witnesses at the time described it as being definately solid, blocking out the stars and the sky as it passed over, and it was mostly explained as being rather enormous. One witness who saw the boomerang-shaped object said it was massive, at least a mile wide, stating:

We don’t have anything that big. It was totally silent. I’ve never seen anything even close to the colors from the exhaust that propelled that thing. It was as big as downtown Prescott and completely blocked out the stars.

The object or objects was usually described as being a V-shaped or wedge-shaped formation of red or orange lights, with the leading light being a bright white, usually said to be embedded within a solid object but descriptions varied, and they were sometimes claimed to be separate lights moving independently. At the time there were dozens of witnesses from all ages and walks of life observing it as it made its way inexorably towards Phoenix to the southeast. The lights were also seen from the nearby town of Dewey, around 10 miles away, and as they drew closer to the greater Phoenix area there would be a deluge of people seeing whatever it was that had come in from out of the unknown.

The phenomenon reached Phoenix at around 8:30 PM, after which it hovered around the area for around two hours, being seen by thousands of people in the process. During this time it seems that there were actually two separate events going on over the region at the same time, with one being the massive V-shaped group of lights moving through the air, and a second formation of lights south of Phoenix that seemed to be stationary or moving very slowly. These lights, which wuld go on to collectively be known as the “Phoenix Lights,” were seen by people from all walks of life, including police officers, pilots, military personnel, and even the governor, none of who could come up with any explanation for what was going on. While most of the reports described some massive solid object, an interesting aspect of it all is that witness descriptions of the phenomena tended to vary to quite a wide degree, of which UFOlogist Peter B. Davenport has said:

Witnesses were reporting such markedly different objects and events that night that it was difficult for investigators to understand what was taking place. Some witnesses reported five lights, others seven, or even more. Some reported that the lights were distinctly orange or red, whereas others reported distinctly white or yellow lights. Many reported the lights were moving across the sky at seemingly high speed, whereas others reported they moved at a slow (angular) velocity, or they even hovered for several minutes.

The objects were being seen all over the place at the time, seen in places as far away as Las Vegas, New Mexico, and northern Mexico, always inspiring awe and dread. In the meantime, the media didn’t really seem to show much interest in it, and officials seemed to treat it as a big joke, with Arizona Governor Fife Symington III holding a press conference on the situation flanked by an aide wearing an alien costume. However, when the story hit USA Today it blew up into national news, appearing all over newspapers and TV shows. The USA Today piece was quite sensational, including the line, “The incident over Arizona was the most dramatic I’ve seen. . . . What we have here is the real thing. They are here,” and people ate it up. Before long the Phoenix lights were being talked about and widely discussed all over the nation, with theories being thrown about as to what the phenomena could have been, which is made somewhat complicated by the fact that it seems that there were two separate phenomena going on at the same time, the large moving object and the hovering lights.

One of the main ideas put forward was that at least the second event concerning the stationary lights was simply flares dropped by the military during a nighttime training exercise, but this has been challenged by many. Curiously one of the main opponents of the flare theory was the governor himself, who would end up later changing his tune entirely, claiming to have seen the lights himself, and he would say of this:

As a pilot and a former Air Force Officer, I can definitively say that this craft did not resemble any man made object I'd ever seen. And it was certainly not high-altitude flares because flares don't fly in formation. It was enormous and inexplicable. Who knows where it came from? A lot of people saw it, and I saw it too. It was dramatic. And it couldn't have been flares because it was too symmetrical. It had a geometric outline, a constant shape. I'm a pilot and I know just about every machine that flies. It was bigger than anything that I've ever seen. It remains a great mystery.

Symington also found it odd that his attempts to get more information from the government on what was going on out there were shot down with basically “no comment,” and that no government agency had made any effort to seriously investigate. Another opponent of the flare theory was UFO enthusiast Jim Dilettoso, who claimed that he had done a full spectral analysis of the lights in one of the videos and determined that they could not have possibly come from a manmade source. However, considering that such an analysis on video footage images would be inaccurate, this had been criticized as an incomplete analysis at best. It has also been pointed out that the wind direction and speed at the time were consistent with flares as to the movement seen with the pattern of lights, which also supports the flare theory, as does the fact that the lights seemed to dip over the horizon and disappear, very much as flares would do. With regards to at least this aspect of the event, even UFOlogists have conceded that it could have been flares in this case.

The first event, which covers that huge, light studded craft moving over the state and blocking out the stars, has been more difficult to explain. Skeptics say that it was just a formation of high altitude aircraft flying in formation on a classified mission, the blackened sky just an illusion. This has been corroborated by amateur astronomer Mitch Stanley, who claims that on the night of the incident he had observed the large V-shaped craft through a telescope to find that it was unambiguously aircraft, specifically a formation of five planes that were either A-10s or possibly T-37 fighter-trainers. However, many of the thousands of witnesses have denied that this could have been the case, the planes were apparently not picked up on radar, and the Davis-Monthan Air Force Base in Tucson did not assert that they had any aircraft in the air at the time. In the end, it all remains a curious oddity, of which one investigator with the Mutual UFO Network (MUFON) has said:

Interestingly, there have been reemergences of the lights in later years that have been explained as flares. On February 6, 2007, almost exactly the same thing was seen over Phoenix and military officials were quick to admit that it was flares they had dropped, and on April 21, 2008, there was another wave of sightings of the lights, this time found to be flares attached to balloons. Yet, the sightings that remain the most well known is the original 1997 incident, and whatever was behind it all, the Phoenix Lights have continued to have a place among the greatest, most extensively seen and documented UFO sightings ever, and still remain mostly a mystery.