The Tale of a Legendary Talking Mongoose: Back in the News

The Haunting of Cashen's Gap: A Modern "Miracle" Investigated is a book that was written back in 1936 by controversial ghost-hunter, Harry Price, along with R.S. Lambert. As you'll see if you click on the first link above, the original edition sells for incredible amounts of money. It's not only a rare and pricey title: the story it tells is downright weird. It all revolves around nothing less than the antics of a talking mongoose named Gef. Yep, you did read that correctly. A talking mongoose. I thought I had better state it twice, just in case you really did think your eyes were deceiving you. But, no, they are not. It's a strange, eerie and - at times - undeniably sad saga of a young girl, her dog, her parents and intense media attention in the early 1930s. And, now, there's a new edition of the book available, which I digested recently, and that makes for fascinating reading. The new edition - which I'll come back to - adds a great deal of new material to the story, along with new theories and ideas regarding what the truth of the whole controversy really was. Or, wasn't. 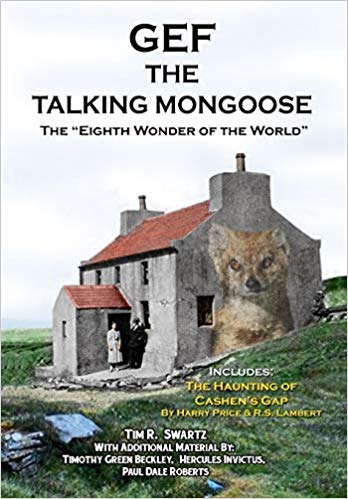 The key players in the story were the Irving family: husband and wife James and Margaret, teenage Voirrey (their daughter), and Mona the sheepdog. And, Gef, of course. If he really existed. The family lived on the Isle of Man, which is located in the Irish Sea, between Great Britain and Ireland. Britannica.com say of the Isle of Man: "The Isle of Man is about 30 miles (48 km) long by 10 miles (16 km) wide, its main axis being southwest to northeast. It has an area of 221 square miles (572 square km). The island consists of a central mountain mass culminating in Snaefell (2,036 feet [621 meters) and extending north and south in low-lying agricultural land. Man’s coastline is rocky and has fine cliff scenery. The grass-covered slate peaks of the central massif are smooth and rounded as a result of action during various glacial periods. The island’s landscape is treeless except in sheltered places. To the southwest lies an islet, the Calf of Man, with precipitous cliffs, which is administered by the Manx National Heritage as a bird sanctuary."

As for the story (which primarily revolved around Voirrey and the elusive Gef) it began in the latter part of 1932. That was the year when strange activity began to occur  in the farmhouse that the Irving family owned, and which was located at Cashen's Gap, near Dalby - hence the title of the book. Strange and repetitive noises were heard in the house; on many occasions they seemed to be coming from behind the walls of the rooms. The sounds suggested that a small animal had got behind the panels and was roaming around, very often at night. Bizarrely, something akin to the cries of a baby were reportedly heard too. It wasn't long before the Irvings realized that they had something seriously strange in their midst: the speaking mongoose allegedly told the astonished family that it was born midway through the 19th century in New Delhi, India!

As the story developed, it became obvious that if Gef was real, then he was no normal animal. Never mind just his alleged ability to speak; there was also the fact that the family referred to him as a spectral animal, as a spirit tied to our world, and as a "familiar." No surprise, it wasn't long before the media was on the scene. Newspaper article-titles on the weird affair included "Clue to Mystery of 'Talking' Weasel;" "House 'Possessed' by a Mongoose;" and "The Dalby 'Spook' Again." Amusingly, as the press stated, there was the story of a man who "has heard it sing, curse, and dance." Gef was not a dangerous entity, though, it should be noted. He would rather scare away the resident mice than kill them. He made sure the fire was out at night and kept wild dogs away. Truly, the story was beyond bizarre, but highly engaging too (it still is). When James Irving died in 1945, Voirrey and her mother moved from the old farmhouse. One year later, the new owner - a man named Leslie Graham - claimed he had shot Gef. Photos, however, suggested that whatever had been killed by Graham was not a mongoose. The mystery continued. In fact, it went on for decades. To the end of her days - in 2005 - Voirrey said that Gef was not a hoax of her making. 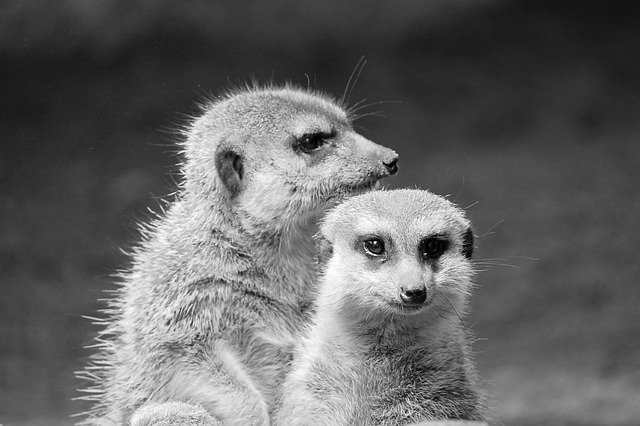 It was inevitable that a book would be written on the strange story. And it was: the aforementioned Price-Lambert book. And, as I said, there is now a new edition of the book. It adds new material, much of which revolves around matters relative to poltergeist activity and Voirrey being the culprit; albeit not deliberately so. We are given background data on some of the more equally controversial claims of poltergeist phenomena (such as the London, England-based "Enfield Poltergeist" and its connection to young girls in the family home). The book notes that Voirrey "...must have passed a curious childhood, without playmates or friends, always in he company of her elderly parents, seeing life from their remote and limited angle." Living under circumstances like that just might have led Voirrey to descend into a fantasy world of her own making - although perhaps not deliberately.

Perhaps, in light of the above, Voirrey inadvertently created what is known as a thought-form (or a Tulpa): an entity born out of the human mind, but which can take on its own strange form of existence. Notably, Voirrey had a big love for animals. Certainly, as the new version of the book reveals, there was no doubt that many (particularly within the media) thought that Voirrey faked the whole thing, which is of course the most likely scenario. On the other hand, the matter of poltergeist activity surfaces a lot, suggesting that there may have been at least some degree of supernatural activity at work. In conclusion it's fair and accurate to say that the story of Voirrey, Gef and the Irving family will never be resolved to the satisfaction of everyone. It remains one of the strangest sagas in the field of investigations of the supernatural type. And, now, you have the chance to dig deep into the whole story.