When the Aliens Want to Talk About Crop Circles

As a follow-up to my article on the strange subject of "Alien Big Cats" seen in U.K.-based Crop Circles, I thought I would share something else with you. Namely, a report of a very different - but no less intriguing - "phenomenon" involving these strange and intricate field-based formations. As I noted in the first article: "Since 2011, I have received no less than nine more reports of people seeing  huge black cats in the Crop Circles of England; all of them in Wiltshire, except for an ABC seen roaming around Chartley Castle, Staffordshire, England in 2015. Rather notably, a Crop Circle was found in a field adjacent to Chartley Castle in the summer of 2006. I know that for sure because me, my dad, and my ex-wife Dana were there to see the creation a day after it was made." All of which brings us to today's article.

Back in March 2009, a certain feature appeared in the pages of the U.K.'s newspaper, the Daily Telegraph. It had a decidedly eye-catching headline. It went as follows: "Dog Walker Met UFO 'Alien' With Scandinavian Accent." Well, that's quite a title, to say the very least! The article was written by journalist Sarah Knapton. The story surfaced into the public domain thanks to the U.K. government's Freedom of Information Act (FOIA). Among the UFO-themed files that the Ministry of Defense released was one that focused on Crop Circles. And, in an amazing fashion, too. Sarah Knapton wrote in her article that the story told of how "a dog walker claimed she met a man from another planet who said aliens were responsible for Crop Circles."

The woman - whose name is unknown, unfortunately - had made a phone-call to a  military base, a Royal Air Force facility at Wattisham, Suffolk, England. It was clear to the person on the other end of the phone that something very weird had happened. It all went down on the night of November 20, 1989. Yes, we're talking about more than thirty years ago now. It was around 10:30 p.m. on that night when the woman was out walking her dog. While doing so a man came up to her - quite out of the blue, I should stress - and who spoke to her with what was clearly a Scandinavian accent. Not only that, he was attired in a "light-brown garment like a flying suit."

The official documentation on the woman's encounter state the following: "He asked her if she was aware of stories about large circular flattened areas appearing in fields of wheat, and then went on to explain that he was from another planet similar to Earth, and that the circles had been caused by others like him who had traveled to Earth." The alleged E.T. told the woman that he meant her no harm at all, but stressed that "they were not to have contact with humans for fear that they would be considered a threat." The woman was said to have been "completely terrified" (yes, that is how the document-writer described it) by the confrontation. 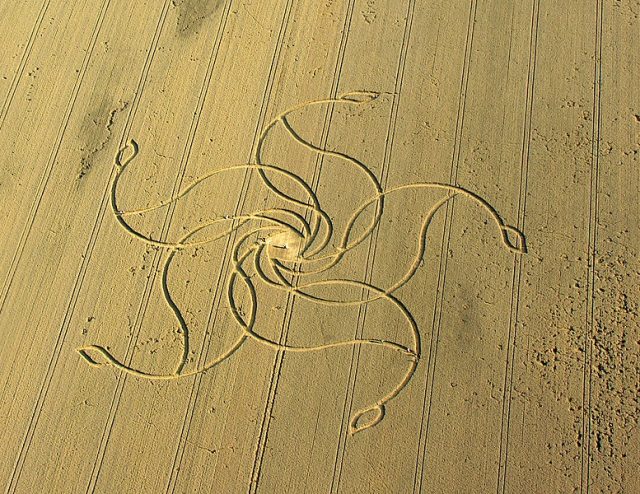 Indeed, the woman got more and more anxious for the safety of herself and her dog, and suddenly and quickly headed off to her home. As the woman exited the area, she couldn't fail to hear a "loud buzzing noise" behind her. She turned around and was amazed to see what the Ministry of Defense described as "a large, glowing, orange-white, spherical object rising vertically" from a clump of very nearby trees. The Royal Air Force operator carefully wrote everything down - and listened carefully, too. In fact, the phone conversation went on for about an hour, chiefly because the military operator was convinced that this was a "genuine call" and not the work of a maniac or a prankster.

It's hard to know what to make of all this. After all, the story - with its human-looking alien, the man's "flying suit," and his foreign accent - sounds like one of those wacky tales that dominated the "Contactee" movement of the 1950s. It must be remembered, though, that the story was taken seriously - hence why it ultimately became one of the Ministry of Defense's "real X-Files." True or not, the tale adds yet another layer of undeniable weirdness to the phenomenon of Crop Circles.