The outskirts of Socorro, New Mexico blend right into desert badlands that stretch off into the horizon, a seemingly unforgiving, hostile place of parched earth and spiny plants. On April 24, 1964, at about 5:50 p.m., a plume of dust kicked up over this moonscape, originating from the patrol car of police officer Lonnie Zamora. He had been in a high speed chase moments before, when a strange roaring sound had filled his ears and he had witnessed a bluish, orange flame soaring through the sky some distance away. It was all odd enough that he had broken off from the chase and was now barreling down a rural road towards where he estimated the flame had originated from to investigate. At this point he was not thinking of UFOs or the world of the weird. His best guess was that a car had overturned or a dynamite shack in the vicinity had blown up, but as he navigated the winding, rough and remote road he saw something sitting out in that desert that he at first assumed to be a white car overturned on the road with what looked like two people standing nearby. At this point he thought that his instincts were correct, and that there had been an accident, but as he rushed forward to offer assistance he would soon realize that this was no car. And thus would begin one of the most well-documented and discussed UFO encounters there is.

As Zamora approached, he could see that rather than an overturned vehicle, the object seemed to be a whitish, “O” or egg shaped vehicle with no discernible windows or doors and a shiny sheen like aluminum, as well as what looked like a set of four thin legs underneath it propping it up, and the figures standing nearby were about the size of small adults, with somewhat large heads and wearing what looked like coveralls and possibly some sort of headgear. Even at this point he wasn’t struck by anything particularly outlandish, although it was starting to give him the odd feeling that something was “off.” The object had some sort of red insignia on it, although he could not tell what exactly it depicted or what it meant, and he says that one of the figures seemed to jump in surprise when it realized he was approaching, after which both of them seemed to disappear within the object. In the meantime Zamora had radioed in the incident and it was then that he would be truly shocked when the object in question began to lift up straight into the air. He explains of what happened next:

Hardly turned around from car, when heard roar (was not exactly a blast), very loud roar — at that close was real loud. Not like a jet — know what jets sound like. Started low frequency quickly, then roar rose in frequency (higher tone) and in loudness — from loud to very loud. At same time as roar saw flame. Flame was under the object. Object was starting to go straight up — slowly up. Object slowly rose straight up. Flame was light blue and at bottom was sort of orange color. From this angle, saw the side of object (not end, as first noted). Difficult to describe flame. Thought, from roar, it might blow up. Flame might have come from underside of object, at middle, possibly a four feet area — very rough guess. Cannot describe flame further except blue and orange. No smoke, except dust in immediate area.

After fell by car and glasses fell off, kept running to north, with car between me and object. Glanced back couple of times. Noted object to rise to about level of car, about 20 to 25 feet guess — took I guess about six seconds when object started to rise and I glanced back. I ran I guess about halfway to where I ducked down — about fifty feet from the car is where I ducked down, just over edge of hill. I guess I had run about 25 feet when I glanced back and saw the object level with the car and it appeared about directly over the place where it rose from.

I was still running and I jumped just over the hill — I stopped because I did not hear the roar. I was scared of the roar, and I had planned to continue running down the hill. I turned around toward the object and at same time put my head toward ground, covering my face with my arms. Being that there was no roar, I looked up, and I saw the object going away from me. It did not come any closer to me. It appeared to go in straight line and at same height — possibly 10 to 15 feet from ground, and it cleared the dynamite shack by about three feet. Shack about eight feet high. Object was travelling very fast. It seemed to rise up, and take off immediately across country. 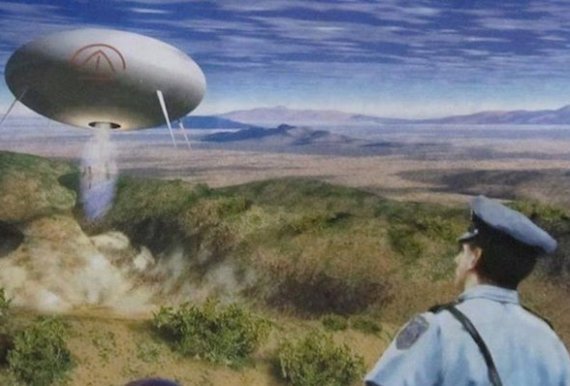 He would claim that after this spectacular takeoff the craft ceased to make any noise or flame, and proceeded to silently shoot off into the distance over a mountain. As he stood there in shock and awe at what he had just witnessed backup arrived, in the form of a Sergeant Chavez. Zamora excitedly told Chavez about what had happened, and the two searched the area to allegedly find strange indentations and scorch marks upon the earth. Other officers who would arrive claimed that some of the vegetation and the ground were still hot to the touch, with some of it even described as still smoldering, as if just hit by a massive heat. Not long after this, word got out about this outlandish incident and reporters were coming in droves, with headlines splashed all over the news talking of aliens and UFOs in the desert.

This quickly got the attention of the government, including the FBI and the U.S. Air Force, in particular the study it had initiated into UFO sightings, called Project Blue Book. Investigators would intensively question Zamora about the incident and deem him to be a reliable witness, a respected police officer who seemed to be telling the truth and had no reason to lie. The FBI would say Zamora was “well regarded as a sober, industrious, and conscientious officer and not given to fantasy.” When Zamora then brought them out to the alleged landing sight, they found wrecked, charred brush and the indentations he spoke of, as well as what looked like some sort of metal scrapings on a rock, and it was all rather baffling indeed.

Investigators were also able to track down other people who had possibly witnessed the same exact event. It turned out that several independent witnesses had also reported seeing an egg-shaped unidentified object trailing a blueish flame at approximately the same time as Zamora’s encounter. One witness in particular gave a dramatic report of some sort of silvery craft emerging from a bank of black smoke, of which he said, “a round, saucer or egg-shaped object ascended vertically from the black smoke... After climbing vertically out of the smoke, the object leveled off and moved in a southwest direction.” There were other witnesses as well, including those who had seen the object visually and those who had heard a strange roar echo out across the desolate landscape, as ell as those who had seen merely a bright flash from the region, but it is all intriguing as many of these reports came in before Zamora’s tale even hit the news. In the end, the case had experts and investigators stumped, and Major Hector Quintanilla, the Air Force Chief of Project Blue Book at the time, would call it a genuinely puzzling case, and he would write in his report on the matter:

There is no doubt that Lonnie Zamora saw an object which left quite an impression on him. There is also no question about Zamora's reliability. He is a serious police officer, a pillar of his church, and a man well versed in recognizing airborne vehicles in his area. He is puzzled by what he saw, and frankly, so are we. This is the best-documented case on record, and still we have been unable, in spite of thorough investigation, to find the vehicle or other stimulus that scared Zamora to the point of panic. 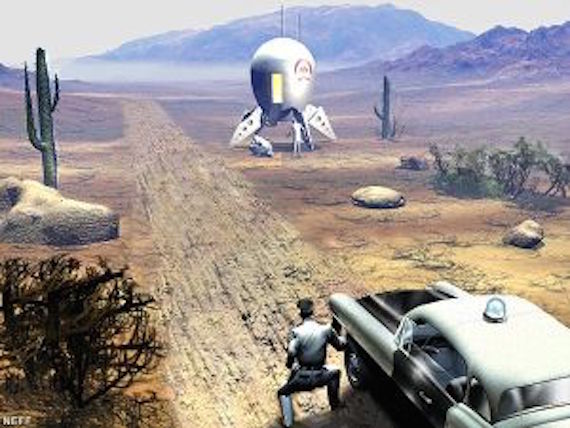 This is particularly odd, as it was in an era in which Project Blue Book was on a crusade to debunk sightings as much as possible, the days of weather balloons, misidentified aircraft, and of course Venus, and rarely admitted to or covered up those that were genuinely unexplained. Adding to the weirdness of it all was a discovery allegedly made in 1968, when a a University of New Mexico doctoral student in radiation biology by the name of Mary G. Mayes claimed to have gone out to the site of the landing to do a study on the “plant material” of the area, and had found that not only were the plants around the site unusually dried out, but that there seemed to be an area of fused sand in the middle of all of this, which looked as if “a hot jet had hit it.” She would claim that after these discoveries the Air Force had moved in to acquire all of her research, data, and samples and that was the last she heard of it.

In later years, the Zamora incident would gain a lot of traction in the UFO community, as it was extremely well-documented and considered a truly unclassifiable event made by a reliable witness, and Zamora would continue to stand by his story. Of course, the main problem is that there is only one person who ever saw the landed craft and around which all of this revolves, and that is Zamora himself. As such, there has been much debate as to how much any of it holds up, and so there have been a lot of theories proposed on what might have gone on out there along that remote road. It has often been suggested that this was all a hoax, not necessarily implemented by Zamora, but perhaps a prank played on him by some enterprising individuals, but if that is the case then they did a good job of fooling everyone involved, including the FBI and Air Force. There is also of course the notion that Zamora set this all himself, as part of a scheme in order to raise tourism to the area.

Other ideas have really run the range, including ball lightning, dust devils, mirages, and top secret military aircraft, even an experimental lunar surveyor being tested out of the nearby White Sands Missile Range. Then of course there is the idea that this was an actual encounter with otherworldly forces, and that this was a genuine alien encounter. It is hard to say, as Zamora is no longer with us, having taken what he saw to the grave with him, and the case has mostly been dropped officially, merely an unexplained little hiccup listed simply as “unknown” and not worthy of follow-up. Whatever it is Zamora encountered out there, it has remained one of the most well-documented and oft discussed UFO encounters out there, and without any definitive answers we will probaby never know exactly what transpired.

Witnesses Say USS Nimitz “Tic-Tac” Had Incredible Flight Capabilities, But That’s Not All