Born in an Animal Sanctuary, She’s Now a Real Dr. Doolittle Who Sleeps Among Big Cats

Say the name “Doctor Dolittle” and, depending on the age of the person you’re speaking to, they’ll either be reminded of Rex Harrison, star of the 1967 film of the same name; Eddie Murphy Murphy, star of the 1998 version; or Robert Downey Jr., star of the 2020 film. However, if you’re in South Africa, the person may be reminded of Kristen Kerr, who claims she can talk to cheetahs and other big cats but whose upbringing might remind one of another movie character – Tarzan.

“It has become part of my daily routine to interact with animals whether they are big or small, it is all I have ever known. Half of the time I forget that the cheetahs are wild – I consider them to be more like house cats. It may sound crazy, but I feel like I can talk to the animals but without saying a word.”

In Dr. Doolittle’s origin story, the novel “The Story of Doctor Dolittle, Being the History of His Peculiar Life at Home and Astonishing Adventures in Foreign Parts (1920)”, written and illustrated by Hugh Lofting, John Dolittle, MD, learns the secret of talking to animals and quits doctoring humans to becomes a veterinarian. On an expedition to Africa, he cures a monkey colony of an epidemic and they give him his famous pushmi-pullyu two-headed llama. In real life, 21-year-old Kristen Kerr tells Metro she was born on an animal sanctuary, home schooled and watched her father raise lions and other big cats. Upon reaching adulthood, she spent a brief tome in the corporate world in Johannesburg but quickly returned to the sanctuary of the sanctuary, where she works and lives today. (Watch a video of Kristen Kerr and her animals here.) “I prefer feeding the big cats and getting my hands dirty in the enclosures – I also educate volunteers about the animals and show them exactly how amazing they are.”

“Dolittle,” the 2020 film starring Robert Downey Jr., is loosely based on “The Voyages of Doctor Dolittle,” the second novel in Hugh Lofting's 15-book Doctor Dolittle series. After his wife’s death seven years before, the eccentric Dolittle (Downey) becomes a hermit, living in Dolittle Manor with only his menagerie for company. In real life, Kristen Kerr obviously interacts with people as well as her cats and other critters, but also spends time alone with her cheetahs, especially at night.

“I have raised three cheetahs since cubs, and they are like my family – I know they would protect me as much as I protect them. They are totally harmless; I lie on the floor with them and kiss their face and sometimes even sleep in the enclosure with them.” 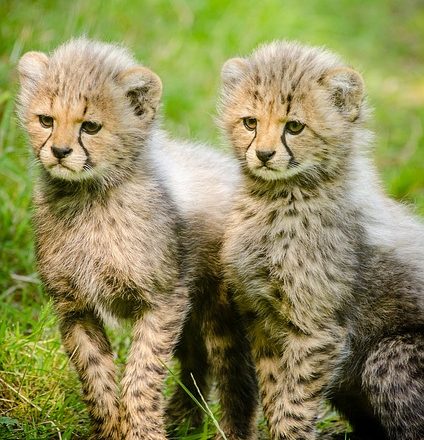 OK, now we’ve got the makings of a female Dr. Dolittle movie. She talks AND sleeps with the animals! Sounds like the perfect role for Scarlett Johansson or perhaps Kate McKinnon. An adventure, a comedy and a tutorial on how to treat animals, respect them and perhaps even save them. Of course, there would be a big warning at the end: Kids … don’t try this at home. Unless your home is an animal sanctuary in Africa, of course. You can see some great pictures of Kristen Kerr and her animals at instagram.com/kristenkerrafrica/.