Two men were out fishing in Okanagan Lake, British Columbia, when they captured something very mysterious on video – some are even suggesting that it’s the infamous Ogopogo lake monster that’s well known in Canadian folklore.

Blake Neudorf’s video shows what appears to be a long dark figure slithering in the lake. The video was initially filmed on July 10, 2018 but Blake only decided to share the footage on YouTube on January 2, 2020. When he posted the video, he wrote, “The thing looks like it is close in the video but it was a few hundred yards off shore and it was huge, I would say at least 60 feet long you could visually see it rolling in the water,” adding, “Toward the end, it goes into a small bay so me and my dad hopped in the truck and drove toward the area it was headed but when we got to the bay it was nowhere to be seen.”

There have so far been over 20,000 views of the video with several comments from people who believe that Blake’s video showed an actual Ogopogo. “Very interesting... Definitely a head-scratcher,” one user wrote, while another one commented, “You can clearly see the giant monster!” Another person commented, “This is history in the making, a cryptid video that's actually clear.”

There were others who were more skeptical and believed that the “monster” was the wake from a boat, but Blake was sure that it wasn’t that as he wrote back, “There were no boats anywhere near it, my dad said he could visually see it come out of the water.”

You can decide for yourself, as the video can be seen here. 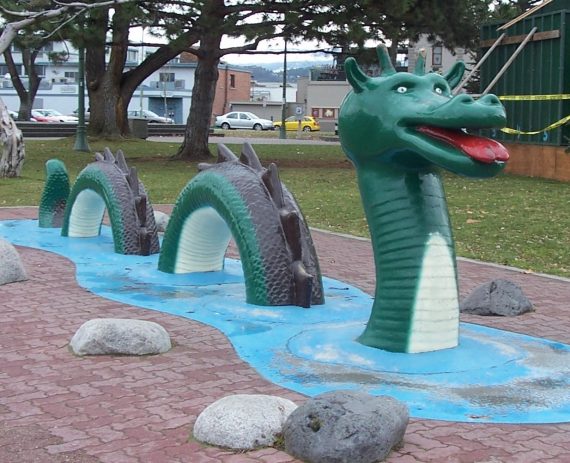 The creature is said to live in the lake and has been spotted several times since the 19th century. Unfortunately, just like the Loch Ness Monster, no definitive proof has ever been found to conclusively confirm that the creature exists.

The Ogopogo lake monster has been described as having multiple humps on its body and its skin is green, black, brown, or gray in color. Some witnesses have described the creature’s head as resembling a snake, horse, sheep, alligator, or seal. Some people have even said that it has horns or ears. Whatever this thing is, it’s allegedly been around for quite a while with several eyewitnesses and many stories to tell.