We have a number of candidates running for president who claim they will investigate the existence of extraterrestrials and their spaceships once they’re elected, but these types of promises tend to get shoved aside when more pressing matters like foreign affairs, domestic disasters and welcoming championship sports teams to the White House interfere. Perhaps it’s because none of these candidates have any actual encounters with UFOs or ETs. Fortunately, there’s one candidate running for US Congress in California (of course) who has both, and his name is probably familiar to ufologists – retired U.S. Air Force Captain Robert Salas, who says the recent release of videos showing military encounters with UFOs are part of his motivation to run, and disclosure is part of his platform. Does he have a chance?

“And just as I [called my commander], our missiles began going into what’s called a no-go condition, or unlaunchable. Essentially, they were disabled while this object was still hovering over our site.”

In 1967, Robert Salas was told by personnel under his command at Malmstrom Air Force Base in Montana that a red, glowing object about 30 feet in diameter was hovering just above the front gate of the facility. As he was escalating this up the chain of command, the ten Minuteman One nuclear-tipped missiles (ICBMs) at the base shut down due to failures in their guidance and control systems. In a story he has now told many times, Salas asked about the status of the UFO and was told by a guard that it took off at a high speed. The ICBMs were eventually brought back online and an investigation was conducted, which found no viable/believable/non-ET cause for the mysterious shutdown. Salas and everyone else involved were told never to discuss the incident again. 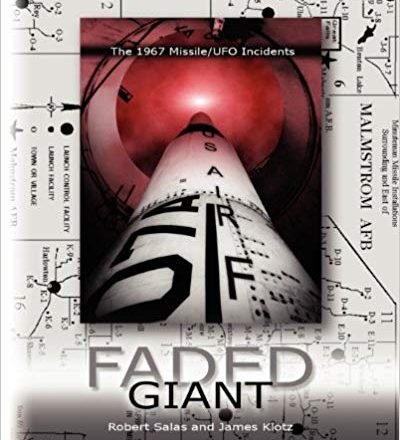 So why do so many people know about it? Well, ex-soldiers talk, especially when there’s beer involved, and Salas discovered there was a similar UFO-related shutdown incident in 1966 at Minot Air Force Base in North Dakota. He decided to come forward with his story in 1994, co-authored a book, Faded Giant, about it in 2005, co-sponsored a press conference about it with other ex-military witnesses in 2010, participated in the Citizen’s Hearing on Disclosure at the National Press Club in Washington in 2013 and wrote another book about it and other similar cases in 2015 (Unidentified: The UFO Phenomenon). And yet, with all of that effort – including lectures and media appearances, Salas has not been able to influence disclosure about UFOs, ETs and their possible relationship to nuclear weapons and nuclear power, even though UFOs are often seen around power plants.

“So, how does this relate to my running for Congress? You may have already guessed? It will be one of my prime objectives to get Congress to take this phenomenon on as a serious matter. One that is directly related to excessive secrecy in many of our agencies and the issue of nuclear weapons.”

On his political website (salas4congress.org), Salas lists “The UFO Issue,” “Excessive Government Secrecy” and “Nuclear Weapons” as part of his platform. For greater details on his beliefs, he refers voters to his other website (spiralgalaxy.org). Unlike the current presidential candidates, Salas is upfront about them. He tells De Void why the recent UFO videos inspired him to run – he sees the military seizing on them as a funding vehicle to fight aliens, not work with them.

“The shutting down of our missiles was, to me, a message – that’s all. They did no damage to those missiles, by the way, they simply upset the inertial guidance system. All they had to do was go out there and reorient the missiles properly so that if they launched, they would be accurate on target. It was strictly an orientation thing.”

Does he have a chance? California’s primaries on March 3rd are bipartisan, which means the top two vote-getters will meet again in November, regardless of their party. So, he just needs to finish second against a strong incumbent. And if he doesn’t?

“I don’t know where this is gonna go. But if I don’t get laughed out of the place for this UFO stuff, if I can get the UFO community behind me even more in terms of donations, then hopefully I’ll have enough to compete, and stimulate more interest in this subject.”

Get out and vote!

Cryptozoology: Paranormal Things and the People Who Pursue Them