When Mount Vesuvius erupted in 79 AD, the heat was so intense that it turned one man’s brain into glass. Archaeologists discovered shiny black material inside the skull of a 25-year-old man.

The young man’s remains were originally found at the Collegium Augustalium in Herculaneum in the 1960s, but his body was only fully examined several years later. The volcanic ash from the eruption covered an area of 12 miles and killed those living in Pompeii as well as in Herculaneum.

In an email to Fox News (several pictures can be seen here), Pierpaolo Petrone, who was the lead author of the study, wrote, “The preservation of ancient brain remains is an extremely rare find, but this is the first-ever discovery of ancient human brain remains, vitrified by heat at about [950 degrees Fahrenheit] produced by a volcanic eruption.” The brain was vitrified because of the extreme heat that suddenly hit the area, followed by a fast drop in temperature.

Herculaneum officials weighed in by stating, “This is the first time ever that vitrified human brain remains have been discovered resulting from heat produced by an eruption.”

Another discovery was made by analyzing the man’s body. They found solidified spongy mass located inside of his chest bones that indicate the extreme heat from the eruption ignited his body fat and ended up vaporizing the soft tissues. Based on charred wood that was discovered around the area, it’s been suggested that temperatures caused by the eruption could have reached as high as 968 degrees Fahrenheit.

Based on how the man’s body was positioned when they found him, it is believed that he was sleeping when the volcanic eruption took place. It has been also suggested that he might have been the caretaker of the building in which he was found. At that time, it was used to worship a past emperor.

In other related news, a new study indicates that some of the victims from the Mount Vesuvius eruption were not instantaneously killed and may have suffered for a short time. Experts have long said that because of the extreme heat from melted rocks, along with volcanic ash and gases, the victims would have instantly perished. The victims who ran to the beach in order to try and escape wouldn’t have been vaporized by the extreme heat, but instead would have suffocated to death on toxic fumes. 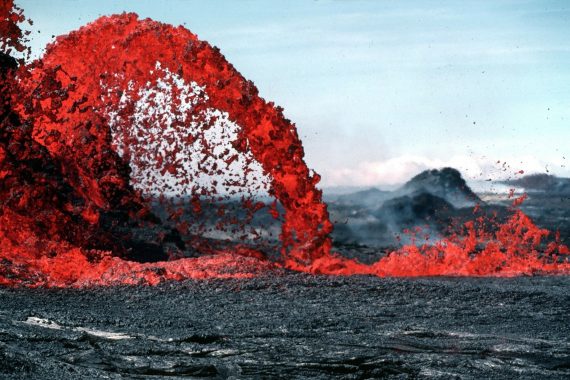 Archaeologists found and examined 340 skeletons from the Herculaneum beach and analyzed the bones to determine what the temperature was when they died. “We can take a piece of bone, we can run it through our equipment and we're able to predict the temperature and intensity of burning that that skeleton has been exposed to, from the change in the crystal structure,” Tim Thompson, who is the study’s co-author and a professor of applied biological anthropology at Teesside University in Middlesbrough, United Kingdom, explained to Live Science, adding, “So we did that. And the results came back as being actually a relatively low-temperature heating event.”

Extreme heat would have affected the collagen found inside of the bones and would have changed the structure of the bones’ crystals. However, by analyzing them, they found that although the temperature on the beach was exceptionally hot (around 820 degrees Fahrenheit), it would have definitely killed those who were standing outside but wouldn’t have been hot enough to vaporize their tissue. Additionally, 92% of the bones had “good collagen preservation”. As for those who were hiding in the boats, they would have been trapped and suffocated to death by the volcanic ash and rock.