Where do the 2020 Democratic presidential candidates stand on UFOs? In front of the nearest ET camera, of course! Bada-bing! Sorry, couldn’t help myself. But seriously, what do the people running for president on the Democratic side think about UFOs, the possible existence of extraterrestrials and the disclosure of secret files on those and other related subjects? Minnesota Senator Amy Klobuchar was recently interviewed by Daymond Steer, a reporter for New Hampshire’s The Conway Daily Sun and someone known for asking politicians those tough UFO questions. Steer asked Klobuchar about the USS Nimitz UFO incident – one of the witnesses was New Hampshire’s own David Fravor. Here’s what she had to say:

“I've read some articles about it. And, you know, I think we don't know enough. I don't know. I mean, I don't know what happened, not just with that sighting, but with others. And, I think one of the things a President could do is to look into what's there; in terms of what does the science say; what does the military say? Here's the interesting part of that answer, is that some of the stuff is really old, these sightings. So, why can't you see if you can let some of that out for the public? So, earnest journalists like you, who are trying to get to the bottom of the truth would be able to see it?"

She explained that a president should be able to figure out what information still needs to be hidden and what can be released, implying that she would be that kind of president. What about the other Democratic candidates? Earlier this year, The Conway Daily Sun asked Andrew Yang and he said:

“I'm very curious about UFOs. I have a feeling they probably do exist."

No word on whether extraterrestrials from other parts of the universe would qualify for Yang’s $1000-per-month ‘universal’ income. When asked about Bernie Sanders, Steer said, “Bernie had no interest in the UFO question." However, in a later interview with Joe Rogan, Sanders himself said he’d reveal UFO information if he found it and “Alright, we’ll announce it on the show. How’s that?” Did Bernie flip or is he just flippant?

Many will remember the 2016 campaign when both Hillary Clinton and her campaign manager and former chief-of-staff to her husband, John Podesta, promised to open the X-files if elected. That didn’t happen, and the current president shows no sign of opening them. When asked about the briefing he received on the USS Nimitz UFO incident, President Trump commented:

“I did have one very brief meeting on it. But people are saying they’re seeing UFOs. Do I believe it? Not particularly.”

The other candidates don’t seem to have been asked any UFO questions or, if they have, are avoiding giving an answer. They may remember 2008 when then candidate Dennis Kucinich admitted during a debate that he had once seen a UFO Over the house of actress Shirley MacLaine and that he “felt a connection in his heart and heard directions in his mind.”

“It was an unidentified flying object, OK? It's, like, it's unidentified. I saw something. I'm also going to move my campaign office to Roswell, New Mexico, and other one in Exeter, New Hampshire, OK? And also, you have to keep in mind that more - that Jimmy Carter saw a UFO and also that more people in this country have seen UFOs than I think approve of George Bush's presidency.”

Kucinich dropped out of the race shortly after and some say his poll numbers plunged because of the comments.

Is this an endorsement of Senator Amy Klobuchar or Andrew Yang because of their UFO beliefs? No. Will any other Democratic candidate give us full disclosure if elected? Partial disclosure? Let’s just say it would be wise to base your voting decision on some other criteria.

The Mysterious Case of the Ulfberht Swords 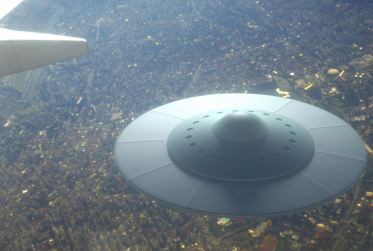