Hauntings sometimes seem to be a dime a dozen, taking many forms, and they are most often attributed to lost spirits of the dead lurking about to cause chaos and trouble. Yet, not all hauntings necessarily follow this pattern, and some are definitely weirder than others. Among the various cases of spectral paranormal phenomena are those that seem harder to classify, and which seem to involve entities other than the ghosts that we typically expect. Here we will look at a selection of very weird accounts that seem to involve some sort of troll-like entities and which serve to expand on just what our definition of a haunting really is.

One very strange case appeared in Arthur Myers's 1986 book The Ghostly Register, and comes to us from the 1980s, in the quiet town of Somerville, Massachusetts. Here a woman known only as “Karen” moved into a 3-story Victorian-era house in 1983, and it seemed like this was to be the house of her dreams. For a few months, it was, but then some odd things began happening around the property. Karen would often go down to the basement to find it was flooded, with a sheen of water covering the place for no discernible reason. The pipes seemed to be fine and there was no sign of where the water was coming from, but at first she just figured there must be a leak somewhere and thought nothing more of it, but this would soon prove to be wrong.

Other strange phenomena began to crop up in the house, beginning with a feeling of insidious dread that would descend upon her when she was on the second and third floors of the house. This inexplicable feeling of stifling fear graduated to an unshakable sense of an actual presence in the room with her at night, of which she said, “I had a feeling of a presence at night, of its being almost like an an animal, as though it had claws or wanted to bite me.” Such was the potency of this that although the house bedrooms were on the second and third floors, she refused to sleep there, instead sleeping on the relatively bearable 1st floor. 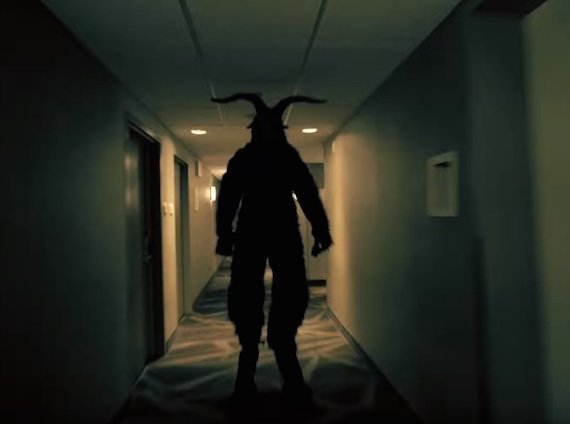 She might have been able to chalk this up to mere nerves and her imagination if it weren’t for the fact that someone else would experience it as well. Karen would end up gaining a roommate to live with in the house, and this new person had a room up on the 3rd floor. Not even one week had passed before the roommate was complaining of the sense of something menacing in the room with her at night, so strong that she was unable to sleep with it lurking in the darkness, as well as that her bed always seemed to be moved against the wall in the morning no matter how many times she moved it back to its position. She told Karen of this, who told the roommate of her own experiences, and it seemed that there was definitely something weird going on.

After this the two women began experiencing increasingly strange phenomena such as their belongings being moved to various places of the house without explanation and poltergeist activity such as lights and other electronics turning on and off by themselves, all of which pointed to the house being perhaps haunted. The terrified occupants apparently reached out to a psychic, who came to take a look around and came to a very bizarre conclusion. According to the psychic, the phenomena they were experiencing were not the results of traditional ghosts, but rather bizarrely it was all due to the psychic attacks of a troll that lived in an underground spring that passed right under the house. It was this spring that was causing the flooding in the basement, and the troll had apparently been trapped ever since the house had been built there. It had then supposedly chosen to direct its psychic energy at the new occupants of the house and that was what was causing all of the strangeness. They arranged a ritual in order to cleanse the house of this supernatural force, and the psychic would say of all of this:

Sometimes what we think of as ghosts - human beings who have died - are instead what might be called noxious rays, earth energies that are blocked. I felt this troll was stuck there. We did a ritual releasing of him. What came to me was to send him to another plane, where his energies could be transformed into a more positive and fruitful existence. 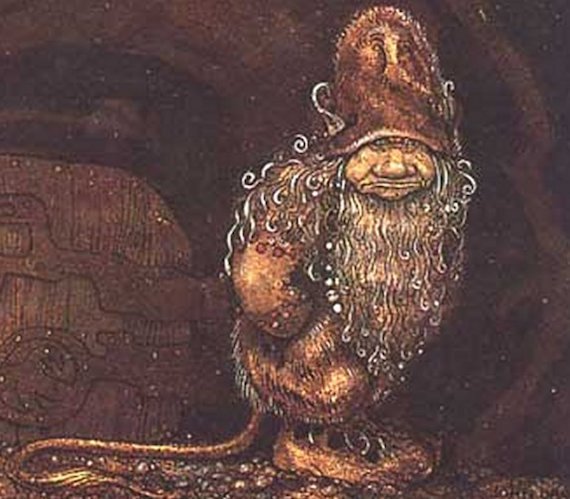 Apparently after the ritual the troll talked to Karen and asked if it could stay, but she told it no, after which it went away for good and there were no further incidents. What is it we are looking at here? It doesn't seem to have been a ghost in the traditional sense of the word, so was this some sort of other phenomenon, perhaps an interdimensional interloper or something else? It is hard to say. Another account of what sounds like some sort of troll or troll-like entity comes from a commenter on Your Ghost Stories, who says that this happened in 2000 in West London, in the United Kingdom. One evening in the summer of that year, the witness says she was troubled by a very vivid dream in which she relived the entire day and came in to go to sleep only to see herself sleeping in her room and disturbingly also saw a hideous troll-like entity by her bedside staring at her. She says of this:

I opened my bedroom door I saw myself sleeping on my Japanese style futon bed. I could see myself sleeping and then to my shock and horror there was an ugly and frightening troll like thing sitting at my feet. This thing was squatting and had a dark brownish hairy body and very big claw like feet, big ears and big red bulging eyes the size of snooker balls and without pupils. Its arms were thin but muscular and it had very sharp and long nails, it was just looking straight on and didn't seem to notice me. It had freaked me so much that I lunged to attack this creature with a ceremonial sword that I used to have hung on my wall, shouting at it and before the sword touched it I suddenly awoke shouting and sweating heavily.

I remember thinking that whatever that thing was it was not good and it left me shook and frightened. That night I slept on the couch downstairs with the tv on. I couldn't believe how vivid and real this dream was. It was a carbon copy of everything that had happened from the time I left work up until the time I entered my room.

She goes on to explain that when she was a child she had occasionally been harassed by smallish, troll or gnome-like creatures that would vanish into thin air, and suspects that the creature was drawn to her because she had a young daughter roughly the same age as she had been when these terrifying experiences happened to her. She also claims that she once took a photo of her daughter only to find a thick wavy smoke like cloud, all of which leads her to believe that this is some sort of demon that is drawn to children. What is this thing she encountered? 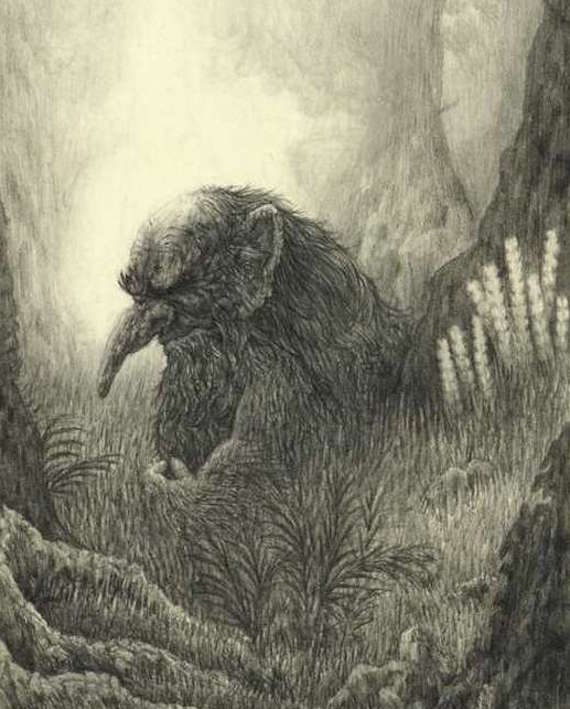 Not all of these experiences happen in homes, and there is a very creepy report from a witness on True Ghost Tales who saw some sort of ethereal troll-like creature as she was driving with her daughter on her way to her mother’s house in 2008 in Campbell County, East Tennessee. The house they were going to was in a very quiet, rural area along a winding 2-lane road. As they turned a bend, they then saw something they were not prepared for, and the witness says:

I came zooming around a curve in the road and immediately had to swerve my car to avoid hitting… it? … sitting on the side of the road. I slowed down and got a good look at the back side of it. It was sitting with its back to the road, its legs stretched out in someone’s driveway, its butt actually on the road. A bad place to be lounging in a blind curve like that. I looked at it, my daughter in the front passenger seat looked at it. It was on her side of the car so she could see it better and it obviously terrified her. Now for what I saw… at first I assumed it was a Halloween decoration some moron had put in the road. It looked like a stuffed dummy, or scarecrow type thing, it was wearing all black, a black hat and a shabby looking black coat. I even saw long black hair, oddly shiny, I remember that clearly, really straight down the center of its back.

Its posture was odd, it was kind of slumped over and the back of its coat looked lumpy, like stuffed with leaves, which is one of the reasons I assumed it was a dummy. I was still slowly passing it after having come to an almost complete stop to look at it, beginning to be indignant that someone thought it was a joke to put it in the road possibly causing an accident. But as I passed it, still staring at it…it turned and looked at me over its shoulder!! All I remember seeing for a split second before I hit the gas and got the heck away was glittering black eyes and a black, wrinkled, sunken-in face, reminding me of a rotten apple, for some reason.

Apparently the troll then just vanished into thin air and she never saw it again. One wonders just what is going on with outlandish accounts like this. It seems we are perhaps looking at something that transcends the usual boundaries of what we consider a haunting to be. Perhaps these are no the spirits of the dead, but another league of entity altogether, something that has perhaps crawled in between the spaces of dimensions and the cracks within the universe itself. Are these things from beyond the veil between realities, ghosts, demons, or something else altogether? Whatever they are, there can be little doubt that these reports are truly creepy.