The Bizarre UFO Crash at Kecksburg

Alleged UFO crashes always generate interest, these cases of possible aliens from another word finding themselves stranded on Earth. There is a surprisingly large number of such accounts, yet some of these are not as well known as Roswell, and a few have managed to remain mostly relatively obscure. One of these supposedly happened in a small rural town in the United States, when something fell down from the heavens to leave bafflement that continues to this day.

On the otherwise peaceful evening of December, 9, 1965, the people of the small town of Kecksburg, Pennsylvania, around 40 miles southeast of Pittsburgh, were startled when a strange glowing object sped across the night sky from the north. The object was seen by hundreds of people, many of who would describe it as somewhat acorn-shaped and emanating wisps of yellow, purple and orange colors, as well as claiming that the object seemed to change directions and to be under intelligent control. One of the witnesses at the time, a boy named Robb Landy was out with his brother when it roared overhead, and he would say of it:

We were riding up the road and we just happened to look up into the sky and we saw this thing coming over the tops of the trees.  It just glided right across the sky, like across the horizon of the trees. We were just, like, in awe, you know, as we watched it. Then it disappeared, and we ran. 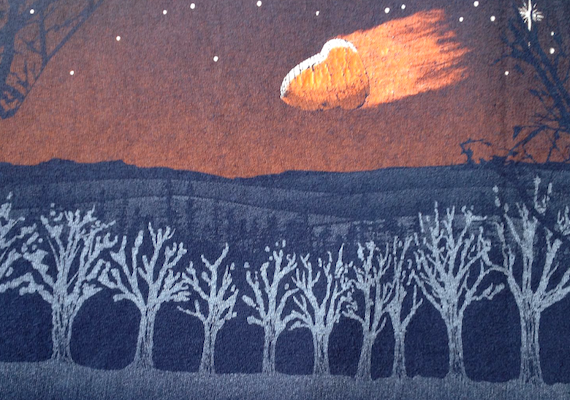 It would later turn out that this strange object had been seen by thousands of witnesses streaking across a large swath of the northeastern United States and Canada, and the thing’s eerie trail reportedly was visible for hundreds of miles around. Yet it seems that after this fantastic light display the object, whatever it was and wherever it came from, would end its journey at Kecksburg, where it reportedly crashed right there in a small wooded hollow near a farm owned by the Kalp family. At the time many people believed that the object had been simply a plane on fire, and so curiosity seekers were soon flocking to where the smoke and fire of the impact site could be seen. It was not long after that police and firefighters were also converging on the scene, and this was when it would slowly become apparent that whatever it was that had fallen out of the sky onto that farm was no plane.

Some of the first descriptions of something very weird going on out in those darkened woods were from search teams that had been brought in to find where the crash site actually was, with these teams mostly formed of state troopers and firefighters. Some of these searchers would claim to have seen a very bright blue light flashing intermittently through the trees through the gloom of the smoke, and some even claimed to have come across the object itself. One of the most spectacular reports of this happening would come from volunteer fire fighter James Romansky, who would say of the outlandish sight awaiting his team:

Here was this humongous metal object, half buried in the ground.  About six, seven, eight foot around, and it was every bit of eight, ten, twelve foot long. And to me the object looked like exactly like a fresh acorn that you’d pick off of a tree.  There was no wings, there was no motors. There was no propellers. There was no identification whatsoever that would identify it as a aircraft that I would know.  There was a bumper on the bottom part of it.  On that bumper there was what I call, it looked to me like the ancient Egyptian hieroglyphics. It was markings like stars, and shapes and figures and circles, and lines, and what it was, I don’t know. To this day I’ve never seen anything like it. So we’re all standing around this thing, wondering what in the heck it could be, and finally here come two men down through the woods. And they took one look at the object, and immediately told us to leave. ‘We are in charge, we’re taking command, get out of here.’ So we left there, and by the time we got back down here to the fire hall, I mean, this place was wall to wall military. 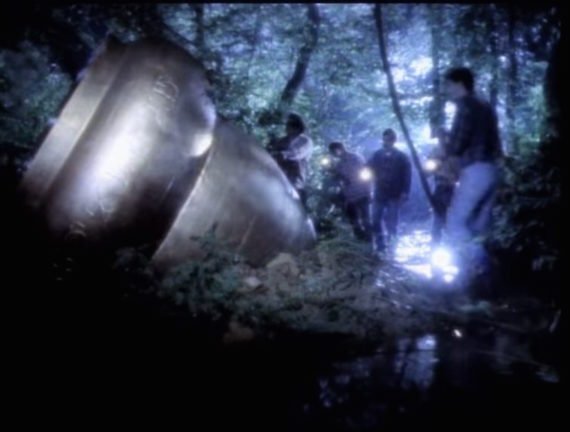 Indeed, by all accounts the military was amazingly quick to arrive on the scene and take charge, within an hour moving in to disperse curious locals and eject all reporters and local authorities from the area. It was amazingly efficient and quick, but there were several witnesses who allegedly got a peak at what they were up to before being chased off. Some of them saw armed personnel swarming about, trucks marked with a white star, and people entering the area with special instruments and in some sort of radiation or HAZMAT suits. One witness named Bill Weaver would say:

I looked down in there myself. I seen there was something down in there, that had bright lights on it. But I couldn’t see the object itself. Some time later, I seen a van type truck pull up there. There was some men dressed in moon suits, we called them at the time, and they had a light colored box, roughly five foot square. They carried it down into the ravine.

Many others made similar claims of radiation suit clad personnel fanning out over the crash site, but the most interesting accounts are of those who say they saw the military whisking the actual mystery object away, which happened within an hour of them arriving. Most witnesses say they were only able to see a large, flatbed truck, flanked by jeeps and holding something large upon it covered with tarps, but some of them would say that they had seen the actual object, and this is where things get weird, as some witnesses insist that it was a large metallic craft of some kind, while others say it was a smaller object about the size of two suitcases put together. For their part, the military officially stated it was a meteorite and then took off without further explanation. The thing is, everyone who got a glimpse of the object maintain that it was no meteorite, and there is also the very distinctive appearance and behavior it had before it fell to earth, as well as the fact that everything was so hush hush. UFO researcher Stan Gordon has explained of what is wrong with the meteorite theory:

Astronomers who looked into the case at the time basically felt that the object in question was a bolides, which was a very bright fire-ball type meteor. But we now know the thing basically was coming down from the tip of Ontario, and appeared to have made about a 25 degree turn to the east, near Cleveland, Ohio. And the interesting thing is, now that the new data suggests that the object made a turn towards the south, and then the object made another turn towards the village of Kecksburg where it was proceeding towards the northeast. Within several miles of the crash site, multiple witnesses tell us that this object was coming in at a very, very slow speed of descent. Meteors do not make controlled turns. They do not come in at a slow speed like this. And they in fact do not glide in, which this thing apparently did. 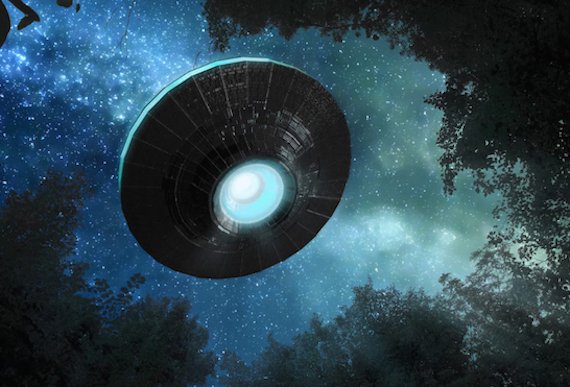 In the aftermath of the strange incident, the people of Kecksburg and UFO researchers alike have struggled to find an answer for what happened that night in the void of any from the government. It seems fairly certain and undisputed that something did indeed come down out of the sky in this rural hamlet, and that the military did move in to clear it out, but just what that was has remained hotly debated. One idea is that this was a downed spy satellite either from a foreign country or domestic, the kind that the government would be keen to sweep under the carpet as much as possible. Another idea is that this was just some random space debris, but if this were the case, then why would the military be on the scene so fast in such full force to so totally lock the place down and keep it all so secret? It has also been found that there are no official records of any space debris being tracked to fall in that area at the time. Neither of these explanations explains the speed and maneuverability of what witnesses had seen either. There is also the possibility put forward that this was perhaps some experimental aircraft that crashed, which could explain some of the details of what witnesses claimed to have seen and the military interest. Of course there is also the idea that this was a genuine UFO and it is being covered up and kept in a secret location. What just about everyone agrees on, except the government, is that this was no meteorite, and Stan Gordon has said:

There was quite a lot of interest by government agencies as to what the object may have been. There were memos there and requests for information from Houston Space Center, from NORAD, from the Air Force Command Post, the Pentagon, even the Chairman of the Office of Emergency Planning requested information. The official Air Force explanation was that it was likely a meteor. And basically what it goes on to say is, the fact that the search was called off around 2:00 A.M. and that nothing was found.  But evidence indicates that something indeed was found at the site.

Whatever came down in Kecksburg that night, is of high importance to the military agencies. The most mysterious thing about the whole case is the fact that after 25 years, the government still refuses to give us any actual information on what occurred. Either way, we’re dealing with some highly advanced space probe, probably of a foreign nation, that appears to be very highly technical for what we knew about 1965. Or, the possibility exists that we may indeed be dealing with an extraterrestrial spacecraft. I’ve always said this thing was either a very secretive, very advanced man-made space vehicle or it was extraterrestrial. In the 50 years I’ve been doing this, I’ve looked at all sorts of American and Soviet objects and nothing ever seemed to fit the description of what we saw in Kecksburg.

It’s a mystery and after so many years it would be great if we could find that conclusive information about what it was that fell from the sky that night in 1965, but it might be one of those things that we may never have the answer for.

To this day the town remembers the event well, hosting a UFO festival every July and keeping a Styrofoam mockup of the UFO that was used for the case appearance on an episode of the TV show Unsolved Mysteries. We are left to wonder just what in the world came down here in this small, rural town. Was it a UFO from another world, a spy satellite, a test aircraft, a meteorite, or what? No one seems to really know, and there has been no forthcoming answer in decades. It certainly seems as if the incident at Kecksburg will live on for some time to come.