The year was 1979, and a man by the name of Robert Taylor was a forestry worker for the Livingston Development Corporation, in Livingston, West Lothian, Scotland. He was a respected war hero, was known as a good, honest worker, and was not prone to spinning wild yarns or getting into trouble, so when on November 8, 1979 he stumbled back from a trip to a hill called Dechmont Law looking disheveled, with cuts on his face, torn clothes, and looking somewhat the worse for wear, people were very concerned. When the visibly shaken man had gotten his head together, he would begin spinning a spectacular tale of bizarreness that has gone on to become a well-known and much discussed piece of UFO lore.

According to Taylor, he had gone out with his dog to do a routine check on the fences, gates, and a sampling project going on in the area. Since there were no direct roads to the remote location, he parked his truck on the nearby M8 expressway and he and the dog made their way into the woods of Dechmont Law on foot. As they progressed through the forest, Taylor says he was startled to see the startling sight of a dark grey metallic “flying dome” around 20 feet in diameter and 30 feet high hovering in the air of a clearing just above the forest floor, apparently kept aloft by an array of “small propellers” around its outer rim. As he looked on in wonder at this bizarre sight, he would claim that the air was pervaded by a smell like “burning brakes.” Very strange indeed, but it was about to get even stranger still.

Taylor claimed that before he had even had time to really process the sheer bizarreness of what he was witnessing, two small spheres detached from the larger craft, which were described as having protrusions and nodules all over them and as looking like “sea mines,” and which started rapidly rolling along the ground to approach the frightened man as they issued a “plopping, sucking sound.” These mysterious spheres reportedly then “grabbed” him with sets of protruding spikes and began pulling him towards the large dome as he struggled against them. He would claim that he believed they had been emanating some sort of toxic gas, as the acidic smell of burning rubber got unbearable and he felt the strength leaving his limbs. The whole time his dog was barking ferociously at the objects. 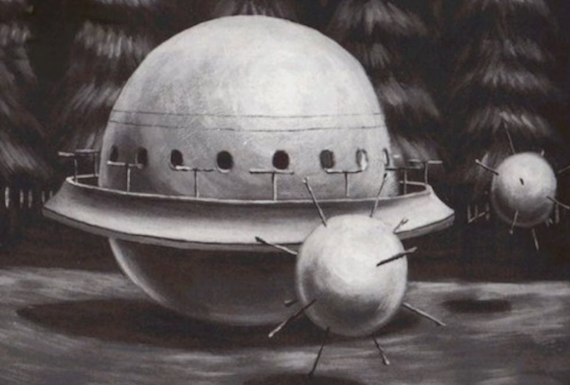 At this point Taylor apparently lost consciousness, and when he awoke he was lying face down in the clearing, which was now empty and with no sign of the otherworldly dome or its malevolent spheres. He found that his clothes had been shredded and that he had cuts and abrasions on his face and body, whether due to his struggle with the spheres or inflicted directly on him he did not know. Taylor had then made his way back to his truck, but was unable to start it, the engine completely dead, and so had stumbled all the way home on foot. Whatever those objects had done to him was still in his system at the time, because he did not seem to have full control of his body and had trouble speaking. When he came staggering to his home in this rambling, dazed, barely coherent state his wife immediately called the police and an investigation would ensue.

Police at first treated this as a common assault, and wrote up Taylor’s mutterings of UFOs and spiked killer spheres as just the rantings of his stressed mind, but they nevertheless went to the scene to investigate and see if they could get some information about the perpetrator. The area where the dome had allegedly appeared was found to have flattened grass, and to contain 32 anomalous holes in the ground, which were about 3.5 inches in diameter each and formed a strange semi-circular pattern, as well as ladder-like marks that looked like the treads of a bulldozer, which were confined to just the clearing and did not come from or lead to anywhere. Authorities tried to find out what could have made the marks by contacting the Livingston Development Corporation, and one investigator would say of this:

After examining every piece of machinery they had up there, we did not find anything to match. These marks just arrived. They did not come from anywhere or go anywhere. They just arrived as though a helicopter or something had landed from the sky. An object of several tons had stood there but there was nothing to show that it had been driven or towed away. There appeared to be no rational explanation for these marks.

In the meantime, Taylor’s ripped clothing was examined by forensics experts, who came to the conclusion that they had been torn by something hooking into them and pulling sharply upward, which when taken with the tread marks made the story of domes and spiked discs sounding less and less far fetched by the minute. Police would ultimately log the incident officially as an assault, but there was nothing more they could do except ponder the strange clues surrounding it all. For his part, Taylor would adamantly insist that his story was true all the way up to his death in 2007, and considering what an upstanding citizen he was many people believed him. What has come to be known as the Robert Taylor Incident, Livingston Incident, or Dechmont Woods Encounter, has since gone on to become a much discussed and highly regarded possibly genuine UFO incident, and UFO researcher and author Malcolm Robinson has said of it:

This case stands head and shoulders above any other Scottish case and has the prestigious hallmark of being the only case officially investigated by the police and forensic science laboratories in Great Britain. Most, if not all, British UFO researchers would say that this one case provides the best evidence that something, not of this Earth, occurred in that lonely wood and which today, stands the test of time as being one of the biggest UFO cases in the annals of British UFOlogy.

Of course there are skeptics of the whole thing, and other possibilities have been offered above and beyond that Taylor was attacked by aliens. For instance the strange markings in the ground have been speculated to have been left by the water company that had been laying a cable duct through the area and had been storing a large collection of PVC pipes near the clearing. Taylor’s story of the dome, the spheres, and the physical effects he experienced have been suggested as being the result of him suffering an isolated attack of temporal lobe epilepsy, which can cause the physical symptoms described and cause hallucinations, which could have all been exacerbated by a case of meningitis Taylor had struggled with not long before the ordeal. It could have also been that he had mistaken a nearby water tower for being an alien craft in this disoriented state. Other theories are that he had consumed hallucinogenic berries, that he had suffered a stroke, that he had seen a mirage of the planet Venus, or simply that he just made the whole thing up. There has never been any definitive answer, and considering that the sole witness has passed away we will probably never know for sure, but the legacy of this case lingers on today and probably will for some time to come.

Bad News, Space Colonists — Martian Water May Be Gone When You Get There