The Mysterious Case of the Kinross UFO Incident

Some of the most spectacular UFO reports are those that involve actual contact or engagement with the craft in question, and cases such as these abound. Among these some of the more intriguing have been the various airborne UFO encounters in the records, and one of the most well-known and documented of these is a compelling case from 1953. It is an account that was widely witnessed, surrounded by oddness, and which resulted in the disappearance of two men and remains mired in questions and conspiracies right up to the present.

It was the evening of November 23, 1953, and what had started out as a routine, quiet night for Air Defense Command Ground Intercept radar operators at Sault Ste. Marie, Michigan, was about to get very weird very fast. It started with an unusual radar signature that was picked up over the Soo Locks area of Lake Superior, near the border with Canada. It was particularly odd, as the area in question was restricted airspace, no one should have been there at all, yet here was this anomalous target just flying through as if it had every business in the world to be there. The nearby Kinross Air Force Base was notified, and they began scrambling a fighter to take to the air and intercept the mystery aircraft. An F-89C Scorpion was prepped for take off and roared up into the sky towards the unknown, carrying within pilot First Lieutenant Felix Moncla and radar operator Second Lieutenant Robert L. Wilson. Little did anyone know that they were about to fly out into one of the greatest UFO mysteries in history, or that they would not be coming back at all.

Once in the air, Wilson went about trying to track the mysterious object, but this would prove to be easier said than done, as he had trouble getting a lock on it. Instead, ground radar operators kept constant radio contact, guiding the plane towards its target, yet as they descended from a higher altitude to engage, the object reportedly made a sudden sharp turn and evaded them. The F-89 panned around to continue the pursuit, and the object managed to match their movements and remain elusive, almost as it was toying with them. Meanwhile, ground radar was watching this cat and mouse game unfold as two blips on a radar screen, and at one point at an altitude of 8,000 feet and around 70 miles from Keweenaw Point the two blips seemed to merge on the screen. This was not necessarily completely shocking in and of itself, as there was no distress signal issued and it was just thought that the two aircraft were passing over or under each other, yet when the expected separation of the single blip into two did not happen, and radio contact with the F-89 was lost as that blip just continued off as one signature things got more worrying. It was thought that this meant the two objects had collided, yet the single blip continued its journey on its original course with no sign of having any problems, until it left the radar range altogether.

There were panicked attempts to recover radio contact with Moncla, but there was nothing but silence in return, and so it was assumed that their plane had crashed and a rescue mission was immediately launched, involving both the American and Canadian Air Forces, as well as numerous ships. The area where the blips had become one was then scoured for any sign of the men or their plane, but not a single sign of any wreckage was found, as if they had just flown off the face of the earth. Neither was any sign found of the mysterious aircraft that had started all of this, and it too seemed to have just vanished.

In the meantime, the USAF got off to an unsteady start trying to explain all of this to the public, at first saying that the F-89 had crashed after chasing a mysterious unidentified object, but they soon backpedaled away from this and completely changed their story. The official report was now that the object that was being chased was actually a Canadian C-47 Skytrain, later oddly changed to a DC-3 airliner, that had flown off course and that the F-89 had crashed due to pilot difficulties on the way back from successfully guiding the Canadian aircraft back on course, speculated as likely caused by Moncla experiencing vertigo, combined with the poor weather at the time. Yet, this doesn’t really jibe with the fact that two radar blips had gone in, merged, and only one had come out. The Royal Canadian Air Force (RCAF) also changed their story, at first saying that the DC-3 pilot had not been aware of the American jet at all, yet they later claimed that there had been no Canadian aircraft in the area at all at the time of the incident. Either way, according to the RCAF the incident had never happened at all. 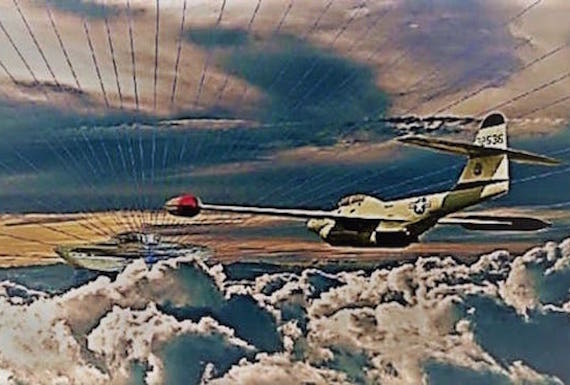 Curious, and it would get even curiouser when ex-Marine and UFO researcher Donald Keyhoe found in leaked Air Force documents that far from considering this an open and shut case, the government in fact considered it to be a very anomalous occurrence that they could not explain. Keyhoe also found that there had been wildly conflicting stories from Air Force officials when informing the families of the victims, with some saying the plane had come in low to crash into Lake Superior and others saying that the plane had exploded and disintegrated in midair. This last one is strange, because does vertigo cause a plane to explode in midair? Without any wreckage to examine it is hard to say, but what is for certain is that the USAF and RCAF couldn’t keep their stories straight. Making it a bit more ominous and conspiratorial is the fact that investigators from the National Investigations Committee on Aerial Phenomena (NICAP) who looked into it were surprised to find that Moncla’s mission had apparently been struck from the official record altogether. They would write:

There is no record in the Air Force files of sighting at Kinross AFB on 23 November 1953… There is no case in the files which even closely parallels these circumstances.

There were other odd things that would pop up related to the case. One is that UFO researcher John Tenney would claim to have spoken to a member of the USAF who claimed that there had been a faint radio transmission from Moncla hours after his plane was said to have gone down, which seems weird and is hard to know what to make of. There would also be a possible clue in the report of some railway workers along the Canadian Algoma Central Railway, who claimed that they had heard a huge explosion on the night of the incident. These incoming leads have done little to solve the mystery, and indeed had only served to sprinkle it with more oddness. 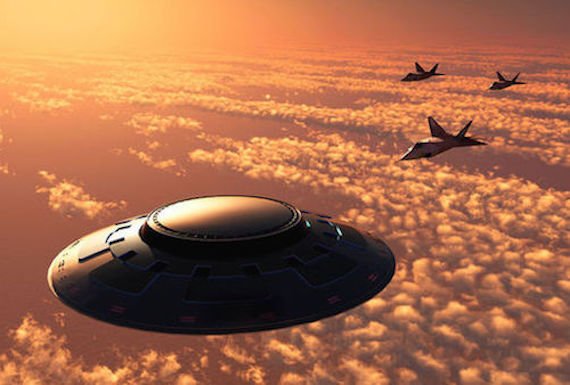 The whole Kinross incident actually received relatively little coverage and remained fairly obscure to the general public at the time, perhaps to the relief of the governments involved, and it flew under the radar for quite a few years until it was sort of resurrected again in 1968. In October of that year, some wreckage was found near the eastern shore of Lake Superior that looked very much like that of a USAF fighter plane, but the only confirmation forthcoming was an Air Force officer admitting that they seemed to be from one of their planes, but the report was never officially recognized and the identity of the parts remains unknown. In 2006 interest in the case was piqued again when it was claimed that a group of Michigan divers from the “Great Lakes Dive Company” had discovered Moncla's F-89 at the bottom of Lake Superior, even providing sonar and photographic evidence. However, efforts to contact the company all led to a man calling himself “Adam Jimenez,” who was very vague about it all. It would later be found that the Great Lakes Dive Company didn’t even really exist, that the claims were likely a part of an elaborate hoax, and Jimenez soon completely disappeared after that.

With so many mysteries and so much conspiracy surrounding it, theories have flown about what happened to the plane and the two men. Maybe it was a crash just as the military has said, but maybe it was something more. The idea has been put forward that this could have involved some top-secret experimental aircraft, possibly from a foreign power, that was engaged out there. There is also the notion that this was a genuine UFO encounter with something beyond our understanding, an otherworldly craft that either collided with the F-89, shot it down, or even abducted the entire plane to whisk it off to places unknown. In the end we are left with a case that officially remains a simple crash, but which is far from satisfactorily explained. With all of the changing stories and obfuscation, there are only a few things we know for sure. We know that Moncla and Wilson took off in that plane to never return. We know that two radar blips converged and only one left. And we know that there has never been any other trace found of the missing plane or crew. Other than that, there is nothing concrete to go on, the government has been very opaque on the whole incident, and we will probably never get the answers we seek, even as that plane and its two crew remain missing.

Jupiter Is Throwing Comets At Earth