The Mysterious Case of the RB-47H UFO Encounter

UFO encounters always skirt the realm of the fantastical and weird, always perplexing and begging for answers on whether they really happened or not. Often there is no real evidence, and we are left with mere stories with no discernible substance, free to swirl about in the limbo of speculation and debate. Yet, there are those cases that are well-documented, recorded, and which serve to be genuine enigmas that stand out among the rest. Truly one of the great UFO cases of recent memory revolves around a flight of an experienced crew, and which was fully verified by numerous sources at the time to firmly cement itself into UFO legend.

It was July of 1957, and a highly advanced RB-47H reconnaissance aircraft loaded with state-of-the-art electronic countermeasure equipment was preparing for a mission. The 6-man crew was highly experienced, consisting of seasoned pilot Lewis D. Chase, copilot James H. McCoid, and navigator Thomas H. Hanley, as well as monitors John J. Provenzano, Frank B. McClure, and Walter A. Tuchscherer. It was to be a routine training mission beginning at Forbes AFB in Topeka, Kansas, and flying out over Gulf of Mexico to perform navigation and enemy radar detection exercises before returning back across the south-central U.S., after which they were to be deployed to Germany. The crew was seasoned and tested, the aircraft cutting edge, with the most sophisticated electronic intelligence available, and when they took off in the early morning hours of July 17, 1957 in clear, calm, and cloudless weather there was no reason to think this would be anything other than a by-the-books, typical training exercise, but it was soon to prove to be anything but. 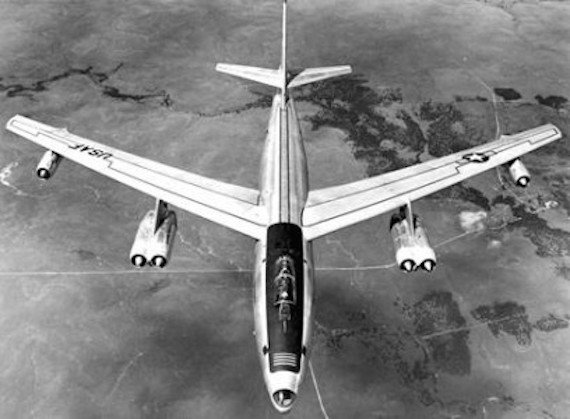 At approximately 4:00 AM, the first part of the mission had already been completed without incident, and the aircraft was making its way back over Gulfport, Mississippi, to continue its exercises when an anomalous airborne signal was picked up by McClure to the rear of the aircraft somewhere out over the Gulf of Mexico. It was first thought that this signal was coming from a ground radar installation due to the nature of its frequency, but it was soon determined that the signal was moving at a rather fast clip, indeed surpassing the plane’s 500 mph airspeed to circle around it to fade and then disappear out over Mississippi. At this point no visual confirmation had yet been made of the object, and indeed McClure made no mention of it at the time, thinking it must have been due to a glitch.

In the meantime, the rest of the crew was oblivious to the whole strange incident, and the aircraft continued on its course over Jackson, Mississippi, where they were due to engage in a series of simulated war exercises against Air Force ground radar units stationed there. Things went smoothly until over Winnsboro, Louisiana pilot Lewis Chase noticed a rather odd sight up ahead. He reported a bright light approaching at a very fast speed. He at first took this to be possibly from the landing lights of an airliner, but it soon became clear that there were no navigational lights, and that the object was a singular very bright bluish-white light moving toward them at a dangerously high speed, and was described as being as big as a house. Alarmed, Chase warned the crew to prepare for evasive maneuvers, but before they even had time to get ready the light had sped by them in a flash and vanished. At this time only the pilot and copilot had actually visually seen the anomaly, and they described it to the rest of the crew even as they reconfigured their equipment to try and pick up whatever it was. McClure at this point came clean about his own odd experience, and they managed to pick up the signal again on several pieces of equipment, showing that this was no glitch, this time seeming to be keeping perfect speed with the RB-47H, and it was agreed that this was not from any ground based radar or normal aircraft.

Throughout all of this the pilot radioed it in and found that ground radar at the Carswell Air Force Base Ground Controlled Intercept (GCI) station was also picking up an unexplainable signature of something up there with them, and he asked for permission to approach the mysterious object, which was granted. However, as soon as the RB-47H moved in to intercept, the signal rapidly dropped over 20,000 feet in altitude almost instantaneously, beyond what any known aircraft was capable of. The mysterious object would then toy with the plane for over an hour, elusively evading them for over 600 miles, all while ground radar registered it and it emitted a powerful radar signal of its own. It was seen to change directions suddenly, speed up, slow down, and rise or dip far beyond what any known aircraft was capable of, as well as intermittently “winking out,” during which time it would be invisible to both ground radar at several locations and the plane’s instruments, before appearing again as if from nowhere. It also was starting to take on the appearance of a bright red light, and this was all very unsettling for the crew. 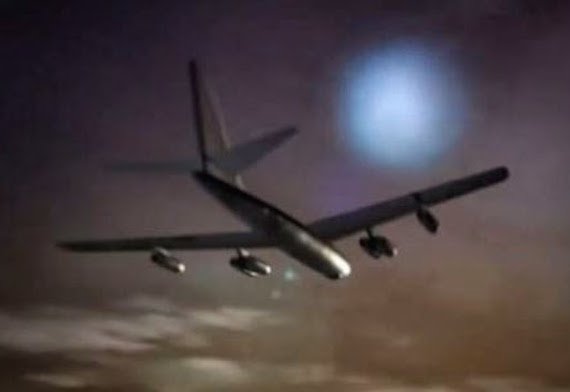 Low on fuel by this point, the RB-47H was forced to stop trying to engage the object and headed north into Oklahoma to land. The mysterious object showed up on their readings all the way up to Oklahoma City, before fading away, this time for good. In Edward U. Condon’s 1969 book Final Report of the Scientific Study of Unidentified Flying Objects, he would report that shortly after landing “electronic counter-measures, graphic data, and radar scope pictures which had been taken during the flight were removed from the plane by Intelligence personnel,” the crew was interrogated heavily, and the whole thing was kept very hush hush, with a “security lid” placed over the incident. Indeed, the case of the RB-47H would remain classified for years, and it was only with its declassification that it ever got out into the wild to be discussed and debated by the UFO community.

In the end it is all a rather harrowing encounter that is notable for the fact that it was fully registered visually by the crew of the plane, picked up on the aircraft’s on board electronic detection devices, and also documented by ground based radar in several locations, which when taken with the experienced crew on board points to this being one of the most authentic and credible reports of a UFO and airplane encounter on record. Nevertheless, Project Bluebook would try to wave it off as a misidentification of a passenger airliners, which, considering all of the available evidence and what was seen and detected, is rather absurd. What was it that harassed that crew up there? Surely it could not have been any normal plane. Was this some sort of experimental aircraft or something else, and why should it deem this training flight to be the subject of its game? Although we may never know, the account of the RB-47H remains one of the best documented and genuine unexplainable UFO cases out there, and will probably hold that title for some time to come.