The Mysterious Case of the Ulfberht Swords

Some of the most interesting mysteries of the past are those artifacts that seem to defy all attempts to understand their true origins and which very often display anomalies we cannot explain. For years there have been found in various places across around Scandinavia, the Baltic Sea, and other areas of northern Europe a collection of 170 Viking swords dated between 800 and 1,000 AD that have a few shared traits that make them incredibly unique and strange historical curiosities surrounded by mystery. Each of these swords is inscribed with the word Ulfberht, which is framed by two crosses, and all of them are sharp and strong well beyond what should have been possible at the time, launching these swords into the annals of great historical mysteries, with many questions surrounding them that have yet to be resolved.

The main mystery with the Ulfberht swords is just how they were made. These weapons were crafted using a material known as crucible steel, which is remarkably pure and has a high carbon content of up to 1.2%, making them much stronger and more formidable than other swords available in the region during that era, and they were forged in a way that was well ahead of its time. In order to create these particular swords, it would have been necessary to heat the iron to around 1,600° C, at which point impurities are liquefied and other ingredients such as carbon are added to the mix to create the steel. It is a highly complex, difficult process, and the resulting product is a comparatively light sword with nearly no impurities, bolstered with far more carbon than was typical in the era, and with a blade that will hold a very sharp point and bend yet not break. 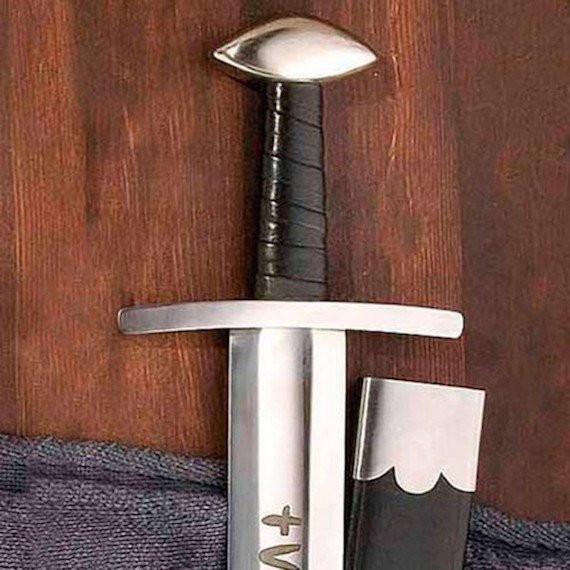 It is very impressive, and this is technology that we are well aware of today, but the thing is, it is widely thought that the methods for heating metal to this degree were not in use in the region until the Industrial Revolution of the 1800s and 1900s, nearly 1,000 years past the date when these Ulfberht swords were made. When these were crafted the main method of getting rid of impurities in the metal was just good old fashioned elbow grease, manually and painstakingly hammering out the iron by hand for hours on end. There were no known furnaces at the time capable of forging what we are seeing with these specimens, and such swords would have commanded awe in those who saw them back in the Viking era, when they would have been significantly more effective in combat and seen as legendary artifacts that might as well have been magical.

Modern blacksmiths have tried to recreate the unique composition of the swords using the medieval technology available at the time, and it has been surmised that it would have been extremely difficult, if not impossible, to do so without the help of sword making skills known far away in the Middle East, where high carbon blades were known to be produced in the form of the mysterious metal known as Damascus Steel. The seeds of the technology could have possibly brought over through trade routes such as that which stretched to the Caspian Sea down the Volga River, but even so, even Damascus Steel production remains a mystery itself that would not have been readily shared with outsiders, and it is also different than what is seen in the Ulfberht swords. It also still would have been a laborious process on a technique not known in the region, and evidence has been found that the swords were most likely forged very near to where they were found, making their composition all the more baffling. It is possible that someone in northern Europe managed to independently develop this coveted technology on their own, but whoever this was and how they actually did it have become lost to the mists of time.

In addition to the advanced technology used, also a mystery is that no one is really sure what the name Ulfberht signifies or why it was so laboriously etched into the swords with what would have been a great amount of extra work that would have dramatically increased the price of an already undoubtedly expensive piece of equipment. It was originally thought that the name was that of a sword maker, but as more of these “Ulfberht Swords” were unearthed it was found that considering they were produced over a time span of more than 200 years it would have been impossible for one person to have created them all. This has led to the idea that it might have been a sort of brand name or trademark, but who made them in the first place remains an enigma. Just about the only thing known about the name is that it is mostly likely a Frankish personal name, but that’s it. It is also not known why it would be so important to go through the labor intensive process of so prominently inscribing the brand name into the swords, a process that also ran the risk of actually damaging the weapons if it was not done right. Whatever the reason, the name must have carried some sort of esteem, status, or power, and one historian has said of this: 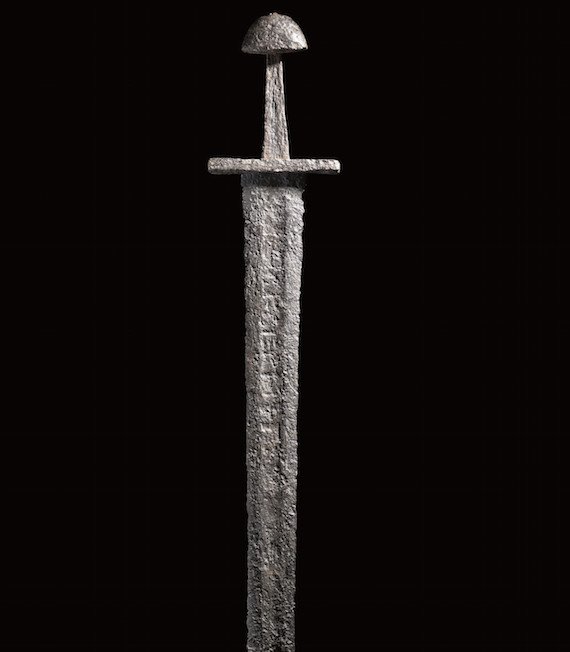 We also don’t know exactly where they were made, although it has been suggested it would not have been far from where they were found, and quite possibly in the the Kingdom of Francia, which was well-known as a sword making mecca in the day, although it still remains a mystery as to why these were of so much better quality and more advanced design compared to others that were available. Just about the only thing we do know is that an Ulfberht sword would have been an insanely expensive, luxury item at the time, a symbol of status and power, sort of like the Ferrari of swords, and indeed just as with luxury items today there have been found forgeries of Ulfberht swords as well, bearing the name but not the quality of the real thing. These were probably made to cash in on the Ulfberht name, but would have had disastrous consequences for the guy duped into buying one. Modern sword expert Alan Williams has said of this:

It must have been an appalling moment when a Viking [realized] he had paid two cows for a fake designer sword; a clash of blade on blade in battle would have led to his sword, still sharp enough to slice through bone, shattering like glass.

It is also known that the methods for making these swords would have also been most certainly a closely guarded secret, which helps to explain why no records for how it was done remain, further making their origins murky. Interestingly, the manufacture of Ulfberht swords seems to have stopped entirely in the 10th century, with blades of equal quality not appearing again in Europe until around 1,000 years later. It is not known exactly why the manufacture of these swords should suddenly stop, and there are theories such as that the secret was perhaps only kept with a few people who were killed, that the trade route that supplied the materials dried up, or that the secret was willingly destroyed, but no one knows for sure. In the end no one really knows who made these swords, how, or why, and they have remained an intriguing anomalous atifact of an era lost to history.