The Mystery of the Ubaid Lizardmen Figures

Some of the best mysteries are those shrouded in the mists of time, from cultures long gone and little-understood. In the days of ancient Iraq there existed a pre-Sumerian culture known as the Ubaidian culture, which dates back between from 5,500 to 4,000 BC in ancient Mesopotamia and which is thought to have sort of kicked off the Sumerian civilization. The sites related to this ancient culture, known for their groundbreaking use of unwalled city layouts, distinct style of pottery, unique food processing tools, impressive architectural skills for the time, including their complex multi-room rectangular mud houses, paved streets, surprisingly advanced irrigation systems, and elaborate temples, as well as for their advanced agricultural know-how, have become meccas for archeologists, especially the site called Tell Al’Ubaid, first excavated by Harry Reginald Hal in 1919. It is here where a very strange and baffling series of findings has been made over the decades that have made this already mysterious and little-known culture all the more enigmatic, among these figures of some unknown race of reptilian humanoids.

Here among the ruins and various intriguing artifacts left behind from this once great culture have been found an assortment of decidedly odd figurines that are unique in that they seem to depict reptilian humanoids of some sort, both male and female, often wearing padding in the shoulders and hats or helmets, and featured in a variety of poses holding various objects such as staves, scepters, and in the case of female figures even suckling babies that are just as lizard-like as the mothers. The figures are unlike anything else uncovered in the region, and feature elongated heads, pointed, muzzled faces, and slanted, almond-shaped eyes, all of them being unambiguously decidedly not human and displaying mostly very reptilian features. The thing is, since their discovery in the 20th century no one has really been able to figure out what they are supposed to be or what their significance is.

It was at first thought that these might be stylized representations of gods the people worshiped, not completely unusual as there are many cultures that have worshiped serpents and reptilian deities, including the Sumerians themselves with their serpent god Enki, but archeologists and historians have doubted this origin for a few reasons. One is that the figures are never really made out to be decked out in opulence or particularly grand clothing, which one would expect if they were almighty gods, and another is that the poses they are found in, including nursing infants, tend to be mundane, unceremonious, and nonreligious, further pushing away the idea that these were revered deities. They seem to be non-ritualistic in nature, yet they nevertheless still seem to have been important in some way to those who created them. So if they were not worshiped as gods then why did this 7,000 year-old civilization make all of these meticulously crafted figures of reptilian humanoid creatures? That largely depends on who you ask.

One idea is that these were just decorative pieces or abstract works of art, the resemblance to reptilian humanoids merely coincidental or an aesthetic design choice, yet is that is the case then why make so many of them with the same basic appearances, clothing, and items? There is also the idea that the Ubaidian culture might have practiced some sort of body modification such as skull elongation, seen in some other cultures around the world, and that these figures are depictions of these individuals, but if so why? There is also the notion that these figures represent some sort of hoax and were planted there, but modern day analysis seems to date them as indeed being from the Ubaid culture, so what is going on here? 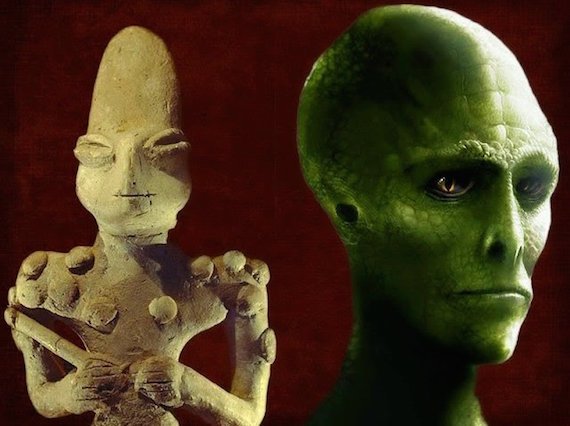 Yet another, more fringe idea is that the figurines could possibly been depicting some real race of aliens or reptilian beings of some sort that were then made into these figures. Could there have been a race of reptilian humanoids roaming about and even interacting with this ancient culture, who were then immortalized in these strange figurines? There is really no way to know, the Ubaid culture in and of itself is already quite the impenetrable mystery, and in the end we can only guess at what these figures signify or what they really meant.