The Strange Slimy Story of Ectoplasm

For a lot of people, especially children of the 80s, the word “ectoplasm” will probably conjure up images of the slime the characters faced in the movie Ghostbusters. In the movie, wherever ghosts go they leave this slimy residue behind, a sign of their presence and worth taking a sample of. But what is ectoplasm really, and was it ever even a real thing? As a matter of fact, ectoplasm was indeed an alleged real thing, and its story is a rather strange one.

The word “ectoplasm” was originally coined in 1894 by psychical researcher Charles Richet, of the U.K.’s Society for Psychical Research, who simply merged the Greek words ektos, meaning "outside", and plasma, meaning "something formed or molded." The word was created to explain a strange phenomenon of the era that seemed to gravitate towards spirit mediums, wherein during particularly intense sessions there would supposedly appear a viscous, gelatinous substance that would gradually solidify into a slimy gauze-like or cloth-like material, sometimes a spider web-type mass, which got more substantial depending on the amount of psychic energy being produced. It could also apparently take on a variety of appearances and manifestations, and one paranormal researcher by the name of Gustav Geley said of it:

It (ectoplasm) is very variable in appearance, being sometimes vaporous, sometimes a plastic paste, sometimes a bundle of fine threads, or a membrane with swellings or fringes, or a fine fabric-like tissue. 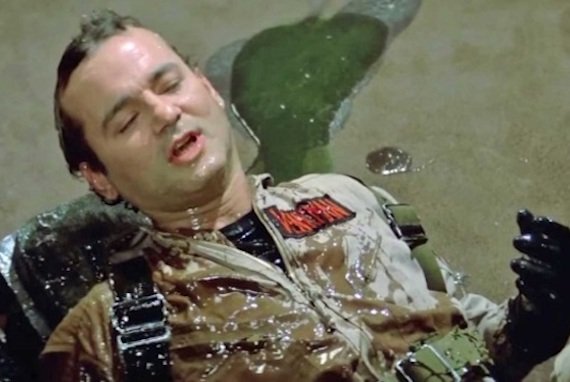 It was usually seen to appear when a medium was in a deep trance state, and was typically expelled from the mouths, ears, and nose. The ectoplasm was said to appear as clear, vaporous, or even invisible at first, and then to gradually take on an off-white coloration as it congealed, sometimes exuding a strong odor like that of ozone. Some claimed that the ectoplasm would only appear in darkened places, and would disintegrate if the light was too bright, and it was even said that it could take the shapes of faces, hands, limbs, or even full body apparitions as it was manipulated by the spirit being communicated with. These strange forms were called pseudopods, and were claimed to be able to move about and even interact with the physical world, moving or holding objects.

As more of this bizarre substance appeared during séances, which were all the rage in the 19th and 20th centuries, the heyday of spiritualism, there were many attempt to come up with theories for exactly what it was. Richet speculated was produced by spiritual energy manifesting as a physical presence, while some other early psychical researchers believed it was related to something they called “ectenic force,” which was thought to dwell within a hypothetical fluid within the brain called the psychode. Still others thought it was a plasma held within the cells of the body itself, an extension of the discovery of what was referred to as protoplasm, or the living content of a cell that is surrounded by a plasma membrane, basically a gelatinous material within the cells, which was reasoned could be ejected from the body under certain circumstances.

For a while ectoplasm was incredibly popular, especially since this was when spiritualism was in full swing and séances were en vogue and a major fad, and a great many spiritualists and researchers believed that it was very real. Sir Arthur Conan Doyle, famed author of the Sherlock Holmes series of books and well-known spiritualist, was one of its staunchest believers, and there were many others who agreed with him, including real scientists and supposed experts. The many photographs taken of ectoplasm in action were also seen as proof, and it was widely accepted as very real. However, cracks began to appear in the phenomenon when more and more mediums were caught faking it. 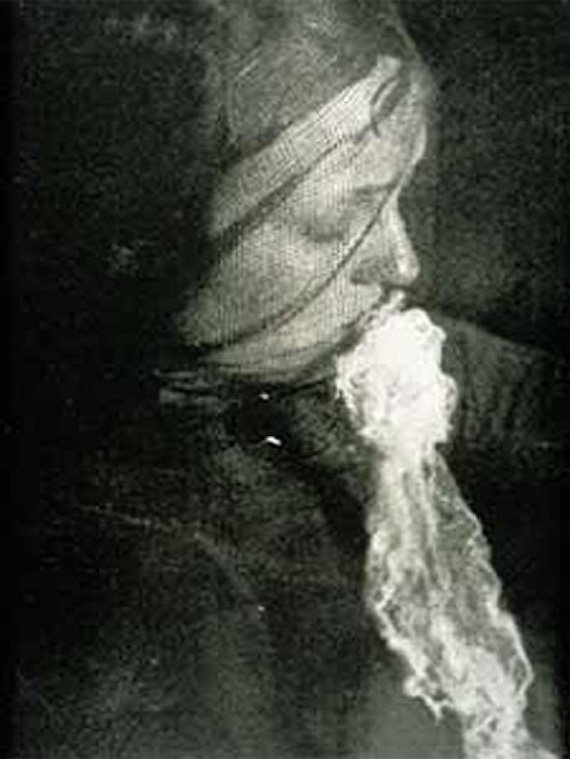 The mediums in these cases would use a variety of recipes to achieve the desired effect, including cheesecloth, chewed up wads of paper, cloth, egg whites or butter muslin, mixtures of soap, and various other miscellaneous materials, which the medium would then regurgitate to create a gross but believable effect. There were even mediums who used other bizarre methods to fake it, such as the medium Mina Crandon, who had been creating ectoplasmic hands that were found to actually be pieces of carved animal livers. These surreal effects were further helped along by the fact that the rooms where this happened were always kept dark, conveniently because the substance would disappear if there was light but very useful for the would be faker. As for the faces that supposedly formed at times within the ectoplasm, some mediums were found to be using simple magazine cut outs of people’s faces or even doll heads.

These exposed frauds were damning for the idea of ectoplasm, and indeed for spiritualism and mediumship as a whole. However, there were still those who stuck by it all, saying that the fakes were just people looking to cash in on what was an otherwise real phenomena and that just because something could be faked it did not follow that it was always fake in every instance. It is too bad then that despite investigations into it all there was never once a genuine, inexplicable case of ectoplasm ever found. Regardless of the veracity of reports of ectoplasm, the trend died down along with the fad in spiritualism, and by the 1930s there were virtually no claims of the strange, supernatural  substance.

In modern times the whole phenomenon of ectoplasm has pretty much fallen off the radar, ecept for in fiction and film, where it is usually depicted as much different than its historical roots suggest. It was never ghosts roving around "sliming" people, but rather just slimy stuff exuding from the orifices of self-professed mediums. What was this mystical, magical substance, and did it ever have any reality to it at all, or was it just another in a false medium's bag of tricks? If it ever was real, then what is it really and what does it signify? There are still a few supposed cases of this to this day, but it has never reached the heights of glory that it did during the peak of spiritualism, so perhaps it is just a little historical quirk that we can only guess at.