Webcam Picks Up UFO over Erupting Popocatepetl Volcano in Mexico

“We all know that it (the volcano) is an alien headquarters, they only “close” the door to scare us so that nobody goes there.”

There are two things you can count on with Mexico’s Popocatepetl volcano – it will erupt frequently and there will be UFOs in video footage of the eruption. The latest incident of both occurred January 27th when the government webcams which keep Popocatepetl under constant surveillance captured the latest eruption and a mysterious UFO streaking across the sky at the same moment. (Watch the video here.) This is where you’re allowed to join the above Twitter commenter and shriek: “Aliens!” Was it?

Let’s get the facts straight first. The video shows just part (15 seconds) of the eruption which began at 23:18 (11:18 pm) local time on January 27. As of this writing, Mexico’s National Center for Disaster Prevention (Cenapred) reported there were “78 exhalations, 563 minutes of tremor, a moderate explosion, a minor explosion and a volcanotectonic earthquake” in the 24 hours following the eruption. After it was posted on the Twitter feed of Webcams de Mexico, which provides the round-the-clock video feeds, it spread across the Internet, where the UFO streaking across the viewing area was picked up by many sites.

Popocatepetl is Mexico’s second-highest peak (5,426 meters or 17,802 ft) and one of its most active volcanoes, with over 15 major eruptions since 1519 (when the Spanish arrived) and many more since it first erupted over 2000,000 years ago. With its high and mighty recent activities and close proximity to Mexico City, it’s no wonder the government has it under close webcam watch for signs of potential eruptions.

And aliens. The webcams see everything going on in the sky above Popocatepetl and have recorded plenty of unidentified objects flying past it or hovering over it. There were a number of sightings during a recent active period in 2017 and speculation then and now on the ‘alien spacecraft’ side tended to see them as proof that aliens or subterrestrials use volcanoes as fuel stations or entry and exit ports to underground facilities. However, this one appears to be passing by as if observing the eruptions – something that many believe is because benevolent aliens are watching out for our safety during disasters.

On the skeptical side, it’s obvious that a lot of bright objects are being spewed by Popocatepetl and the videos are generally dark due to the time of day or dense smoke. They also use time-lapse photography, so unidentified objects appear to be moving faster than they really are. 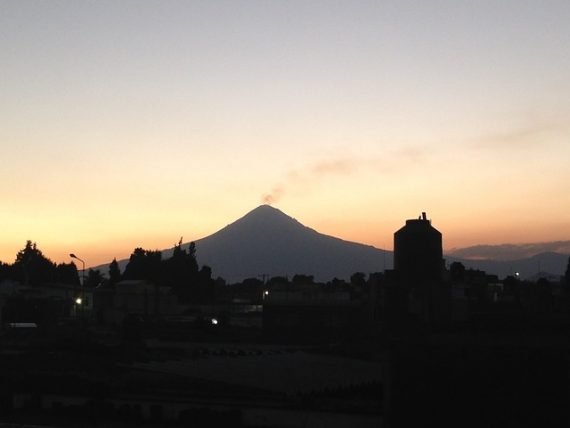 That’s the case with the latest video. It’s obvious that the stars are moving quickly as well. The elongated shape means it could be a plane or one of those ubiquitous drones – it IS a newsworthy eruption. Or, as some suggest, it could be a meteor or the ISS or a satellite. Since it seems to pass behind the smoke of the Popocatepetl eruption, a bug or bird can probably be eliminated.

So, what is it? The needle is on the skeptical side with this one – probably a plane or satellite. However, if it IS an alien craft, it might be wise to take it as one of those benevolent ones and stay away from Popocatepetl for a while.

Has anyone checked for UFOs over Wuhan, China?

The Time Billionaire Richard Branson Punked Everyone with a Fake UFO