When the Government of the Soviet Union Faked a Crashed UFO

Nineteen-sixty-nine was the year in which an elaborate UFO-themed Soviet ruse was put into place. It was highly sophisticated and revolved around a crashed UFO and the autopsy of an alleged alien creature. There's no doubt in my mind that this was the creation of Soviet intelligence, doing its best to try and convince the United States that Russia had alien technology in its hands - when it actually had nothing of the sort in its hands. The story itself is undeniably fascinating, though – which is what the Russians were surely counting on – as the “evidence” is an old piece of film-footage that reportedly chronicled the whole thing. While the crash of the UFO is said to have occurred in March 1969, the story – and the attendant film – did not surface until 1998, almost three decades later. That was the year in which a television production, The Secret KGB UFO Files, was broadcast in the United States and elsewhere. A great deal of money was put into the over-sensationalized production and it was hosted by the late Roger Moore, the star of seven of the phenomenally successful James Bond movies. The documentary covered a wide body of UFO-based data; however, there’s no doubt that it was specifically the film of the supposed crashed UFO and its deceased crew-member which caught the attention of most of those who bothered to watch it.

Certainly, a great deal of effort went into the production of the film: this was no amateur, halfhearted operation. The footage is grainy, appears old, and was filmed by someone with a hand-held camera. It shows around fifteen-to-twenty men wearing Russian uniforms, thick coats and hats; they are all armed and are guarding a small, circular-shaped craft which appears to have slammed into the ground in a wooded, frosty area. The location was said to have been Sverdlovsky, Russia. The trees are largely bereft of leaves and everything points to the incident having occurred in very cold, bleak weather. Only around a half of the saucer-shaped vehicle protrudes out of the soil, in an angled fashion. The inference is that the military unit found the craft shortly after it hit the ground and, at the time of the filming, were in the process of guarding the site from any and all onlookers that might have come along. To this day, we don’t know where the film came from, and how it reached the producers of The Secret KGB UFO Files. We’re told that the production company had to pay $10,000 U.S. dollars to secure it, after it was smuggled out of KGB archives. Supposedly.

It is worth noting the following from the National UFO Center: “The footage at the crash site does seem to be authentic at least on several points. The truck in the film is a circa 1950 model ZIS151, which has not been used by the military for quite some time, and the truck would have been difficult to find to stage a hoax with. Other elements of the film do not exhibit any obvious signs of a hoax.” It should be noted there are two other, old military vehicles in the film, too. 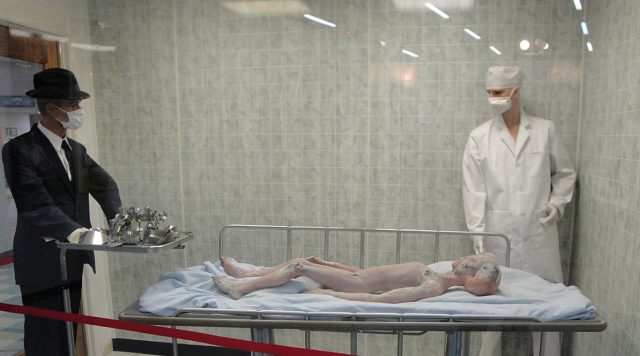 As for the remaining portion of the film, it very much mirrors the notorious “Alien Autopsy” film, which, in 1995, was foisted on the world by a man named Ray Santilli, and to wildly varying degrees of fanfare. Three men appear to be working on the autopsy of a small, humanoid creature, while a woman take notes. Numerous websites claim that the woman has been "identified" as a “KGB stenographer” named “O.A. Pshonikina.” This statement has been repeated time and again; yet, there is no evidence to prove the claim. Such is the reliability – or not - of the Internet.