Witnesses Say USS Nimitz “Tic-Tac” Had Incredible Flight Capabilities, But That’s Not All

This was how Gary Voorhis, former Petty Officer 3rd Class Fire Controlman aboard the USS Princeton, described the behavior of an unidentified flying object that was tracked and observed across multiple systems during a 2004 Naval incident off the coast of California. The events described here, commonly known today as the USS Nimitz UFO incident, have become one of the most widely-discussed instances involving unexplained aerial phenomena of the modern era.

A number of key factors have contributed to the attention this incident has gained, which include the involvement of multiple witnesses, and more fundamentally, that it had been a military encounter with obvious national defense implications. Also contributing to the interest it has received had been footage obtained with the help of the Raytheon ATFLIR targeting pod systems employed by the Navy, as well as observations by radar operators and other technicians in the Navy's Strike Carrier Group-11. All of these sources provided information about the operational capabilities of the craft, which has since been popularly likened to a bus-sized, flying "tic-tac".

Gary Voorhis and Ryan Weigelt, both of whom served with the Carrier Group-11 at the time of the incident, related a number of unique details to me during a recent interview I conducted with them about the incident. Voorhis, as described earlier, had been a Petty Officer 3rd Class Fire Controlman aboard the USS Princeton, and was one of the system technicians for the Cooperative Engagement Capability and AEGIS Combat systems, which included the AN/SPY-1 Bravo radar. Weigelt, a former Leading Petty Officer, had been the power plant specialist of the SH-60B Seahawk helicopter at the same time. 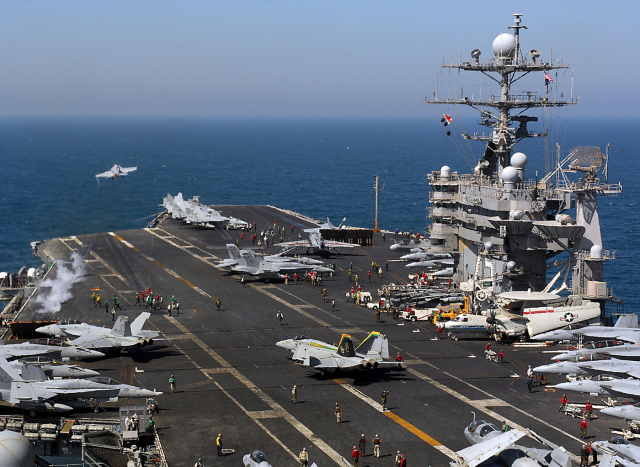 One of the key elements that both men shared with me in our interview had been their recollection of seeing the now-famous intercept attempt led by Commander David Fravor, a former commanding officer of Strike Fighter Squadron 41 (and, notably, the officer to first compare the object or aircraft's shape to a "tic-tac"). Fravor was accompanied at the time of the intercept by his weapon systems officer and two other pilots.

"When I started watching this film to begin with," Voorhis recalled, "they had already started the intercept. The object was moving around, and it was moving in conjunction with the pilot. It would move out of the frame, but then the pilot would adjust, and it would come back into the frame.

"And then it would move sharp to the right, sharp to the left, up, down, any particular direction it wanted to go. It had no rudders, no props, no jet plume. You couldn't tell which side was the front and which side was the back, except that you'd just assume that which way is going forward is front. But you can't even assume that, because it would just move sideways.

"You're waiting for it to move," Voorhis said. "Then it just moves."

Voorhis also said that the objects were tracked more than once on radar over the course of several weeks and that, on a few occasions when such radar detections occurred, he attempted to observe the objects with binoculars from the top deck of the U.S.S. Princeton. Voorhis described seeing what appeared to be movement of phosphorescent, albeit ambiguous objects along the horizon in the direction indicated by radar.

And yet, perhaps the Nimitz object's otherworldly maneuverability isn't the only impressive thing about its capabilities. Shortly after the initial phase of the intercept, Fravor and the others were alerted via radio that the object reappeared, this time at a designated "cap point", as indicated in interviews about the incident.

“We were at least 40 miles away, and in less than a minute this thing was already at our cap point,” Fravor told the New York Times in 2017. Although the unidentified object at no time displayed any offensive capabilities or other indications of hostile intent, the fact that it (or rather, its operators) had obvious knowledge of the Combat Air Patrol coordinates seems to indicate one of two possibilities:

The implications of either scenario are significant, and may even be fundamental to understanding the nature of the technology in question.

The various accounts of this object and its capabilities, observed at close-range by Fravor and his company during the intercept, as well as on radar by Voorhis, Day, and others, indicates something that is well beyond the capabilities of any known technologies possessed today by the United States; the same can be said of any other world superpower. This should not necessarily be alarming, as there was no indication of overt offensive capabilities displayed by the object. However, any object or aircraft with such highly advanced performance should not be ruled out as a concern.

It could be decades (at least) before any further information is released that will give the public a clear idea as to what the 2004 Nimitz incident really entailed. That, however, relies heavily on whether the U.S. government--or that of any nation--actually possesses any significant further information in the first place.

Voice Of Egyptian Priest Has Been Recreated 3,000 Years After His Death