You can call it a djinn or you can call it a jinn or you can call it a genie, but do you know who to call when there’s one of these supernatural and usually evil (sorry Disney fans) creatures in your house? If you live in Malaysia (an apparent hotbed of djinns), you call Saad Ja’afar, owner of The Pakar Tangkap Jin -- the Djinn trapping expert who claims to be the world’s first (and possibly only) djinn trapper … who’s so good at it, he doesn’t even have to leave his office to clean your house. If you don’t have a djinn, can he do a remote djusting?

“I don’t have to physically be there at the location to catch the ghost. Before this, the furthest I’ve captured a djinn was at Sabah. We keep the spirit and djinn close to the mosque to encourage it to repent.”

It’s a good thing Saad Ja’afar doesn’t have to travel to catch djinns. He lives in Johor Bahru and Sabah is a 2+ hour flight on another island of Malaysia. World of Buzz recently discovered the Djinn Hunter, who has been in business since 2015. According to the Malaysian media site MStar, Ja’afar Sa'ad charges RM200 -- Malaysia’s currency is the Malaysian ringgit and RM200 is about $48.75 US -- for a two-hour session. However, he says he’ll take whatever they can afford and even gives away his secret – djinn’s hate salt and pepper. What do they like … Mrs. Dash? 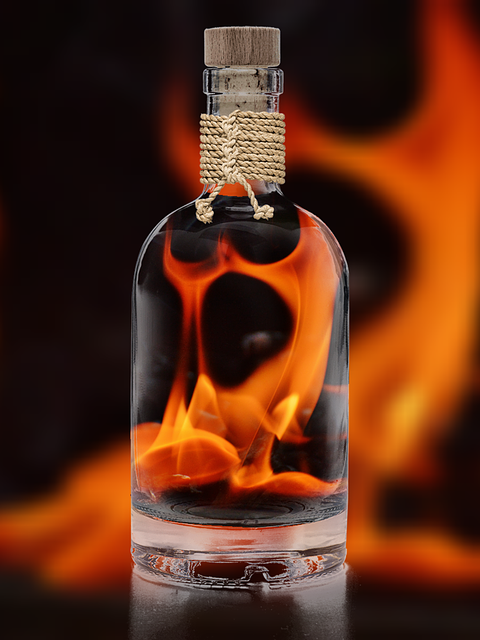 While Ja’afar can capture and remove your djinn remotely, the cleansing is not permanent and the evil spirits can return. On January 2, Ja’afar reported on his blog the story of a house he had actually made a physical visit to in 2017 because there was a fire in it allegedly set by djinn. He claimed to have captured and removed the djinn, but there was another fire a few days later which he blamed on a different djinn that was brought into the house by a bomoh – a Malaysian shaman. A rival djinn hunter or an unskilled one?

“And it's happening again now, but another home is DECEMBER 2019. After capturing the jinn, in our way, we smelled the jinn and the chief jinn was severely crushed. Only then did we interrogate the chief. Upon interrogation, the chief of the genie and all his gangs are confined to a special prison (not in your bottle) so that they can no longer bother humans.”

It's two years later and a reporter showed Ja’afar a video of a house burning, which he says he recognized as the one he cleaned back in 2017. As he described it, he captured the smelly djinn chief and his gang and locked them up so they can “no longer bother humans.” Is this really comforting to the homeowner? Ja’afar claims he’s captured hundreds of djinn/genies since setting up shop in 2015 and this house has been hit three times. Does he punch a card and give a free cleansing after the first 10?

It’s an interesting story, but is Saad Ja’afar really offering a reliable service when his best customers keep getting infested by more house-igniting demons? How does he do it remotely? Does the customer have to take his word for it or can they see smoke or shadows being sucked out of their window? He claims to keep the djinn jails near a mosque so the genies will repent, but does he then release them? How does he know if and when they’re truly contrite? Also, djinn are known to prefer forests and avoid humans. Yet, it seems Malaysian homes and businesses are overrun by them – Malaysia Gazette reports he removed djinns from a clinic in Kuala Lumpur in May 2019 and his Facebook site and his blog list more of his ‘successful’ captures.

When you’ve got a djinn, who are you gonna call? Saad Ja’afar is the only name that comes up in a djinn-remover search. Maybe he really is ‘The World’s First and Only Djinn Hunter.’