There are many things of which we can say: “The more we learn about them, the less we know about them.” That seems to now be the case with fast radio bursts – those mysterious radio signals coming to Earth from somewhere in deep outer space. Actually, “somewhere” is no longer a mystery -- FRB 180916.J0158+65 (FRB 180916 for short), one of the rare repeating fast radio bursts, was recently traced to a medium-sized spiral galaxy (SDSS J015800.28+654253.0) only 500 million light-years away. Now that astronomers know where to look for a repeater, they’ve taken to staring at it constantly, and have made a new discovery revealing it may be more mysterious than first thought -- FRB 180916 is not just repeating … it’s sending its signals in a regular, predictable pattern of bursts and pauses. All together now … it’s aliens!

“Here we report the detection of a 16.35±0.18 day periodicity from a repeating FRB 180916.J0158+65 detected by the Canadian Hydrogen Intensity Mapping Experiment Fast Radio Burst Project (CHIME/FRB). In 28 bursts recorded from 16th September 2018 through 30th October 2019, we find that bursts arrive in a 4.0-day phase window, with some cycles showing no bursts, and some showing multiple bursts, within CHIME's limited daily exposure.” 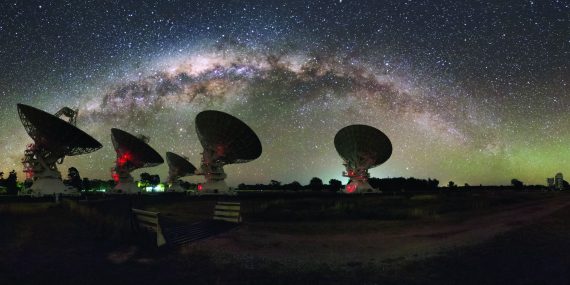 “Here” is a paper contributed to by dozens of astronomers involved with the CHIME Project and published recently on the preprint server arXiv. It reports that the astronomers observed fast radio bursts from FRB 180916 at 1-2 bursts per hour over four-day periods, followed by 12 days of radio silence, and this pattern repeated consistently 28 times.

“That this is the first detected periodicity of any kind in an FRB source.”

That’s the easy part. The real question is: what is causing it?

Or it could be an alien civilization. One of the justifications for building expensive radio telescopes around the world is the persistent speculation for decades by serious scientists and astronomers that fast radio bursts could be messages from intelligent beings. What better way to show you’re intelligent than by doing something regularly for a long period in order to catch the attention of another intelligent civilization? That’s exactly what happened here -- although calling ourselves an ‘intelligent civilization’ is debatable these days.

And that’s what will continue to happen now that astronomers have pinpointed the source and proven a pattern to the fast radio bursts known as FRB 180916. How will we know when they and other astronomers using different telescopes and other methods have found something that tells them more about it?

When they give it a better name.

Scientists Discover Mysterious Virus In Brazil With No Known Genes