Coronavirus Plague Predicted for 2020 by Buddhist Monk 100 Years Ago

When eagle-eyed Dean Koontz fans found a reference to “Wuhan-400” in his novel, “The Eyes of Darkness,” the Internet went wild – even though it’s more of a coincidence than a prediction. A similar thing is now happening in China where eagle-eyed readers of the “Ancient Internal Bible” noticed a passage by a Buddhist monk predicted horrific happenings in China in the year 2020. Another coincidence … or is that country in the midst of “The year all of China will weep”?

“The year 2020 – The year all of China will weep. The omens will be so bad that the New Year will not be celebrated. Then the plague will come. It will come with a fury – the tigers and the wolves will hide in the mountains. The plague will encompass all the land – and will eventually spread to the whole world. Very soon – rice will become so expensive that no one can eat. Then the rivers will sink all the boats. People in that year will only be able to harvest rice in the very early spring. There will be no harvest of late season rice, beans, wheat, and oats because vast clouds of locusts will lay waste to the entire countryside.”

This quote comes from a recent article in The American Conservative, where senior editor Rod Dreher relays dispatches from his anonymous friend -- “The Doctor” – who lives in Dallas but his China-born wife has family in the country and has been getting regular reports from them as well has from Chinese social media sites. “The Doctor” tries to warn the world through Dreher of what’s really happening in the one country that truly has an epidemic of the coronavirus.

“The Doctor” says his in-laws have been under either quarantine or martial law for weeks and complain of the “stench of death” coming from livestock dying due to neglect and crops not being harvested. Because real data on the disease is lacking or controlled and government statements are disbelieved as propaganda, the people turn to myths, psychics and ancient writings taken on faith rather than science. One such document is something The Doctor calls the “Ancient Internal Bible,” which he says was secretly written in an old dialect and is difficult to translate into English. The author of the passage also predicts something else that is happening in 2020.

“I, Gentleman Zigong, assure you Chinese in 2020 that the locusts will fall from the skies and the destruction will be complete. Smoke and fire will fill the fields – but nothing will be able to stop the swarms. Once the locusts have destroyed the land and the smoke is still coming from the ground, the rivers will flood the countryside.” 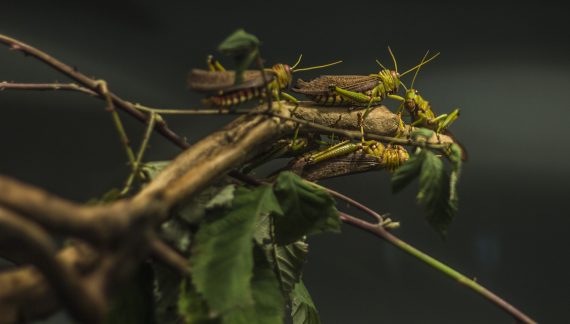 As you may have read in the mainstream media, China is definitely suffering from a plague of locusts on its western border with Pakistan, but the rumor that the Chinese government is sending 100,000 ducks (Peking or otherwise) to eat them is false -- the area is too dry for ducks. Searches have not turned up any additional information on Gentleman Zigong nor the “Ancient Internal Bible” (said to have been written in secrecy to hide it from the Chinese government), and “The Doctor” – whose identity is also a mystery – admits it could be a hoax. However, he also warns that hoaxes are easiest believed in times of stress (it’s good to remind us of that too). Real or not, Gentleman Zigong gives some interesting advice to the people of 2020.

“I, Gentleman Zigong, will tell you Chinese in 2020 how to survive. Remain very close to your families and your neighbors. The best is to have stored up plenty of gold and food to live and share freely with those you love. Tolerate no thieves among the people. Be uniters and not dividers. If you can do all these things, you will survive.”

Good advice for everyone affected by the spread of the coronavirus and the information and misinformation spreading in its wake.

Some Very Bizarre Cryptid Entities Seen Only Once