Pliny the Elder (the man, not the beer) was a Roman naval and army commander, philosopher and author of Naturalis Historia, the first encyclopedia and the best historical account of life before and during the first century CE. Pliny the Younger, his nephew and adopted son, is the best-known source of the death of Pliny shortly after the eruption of Vesuvius in 79 CE. In a letter, he wrote that Pliny had been ordered to rescue the Roman senator Pomponianus from Stabiae, 4.5 km (2.8 miles) southwest of Pompeii (near Naples) in the direct path of the volcano’s pumice plume fallout. Pliny died there (possibly from breathing toxic fumes) and his body was left under a layer of pumice. 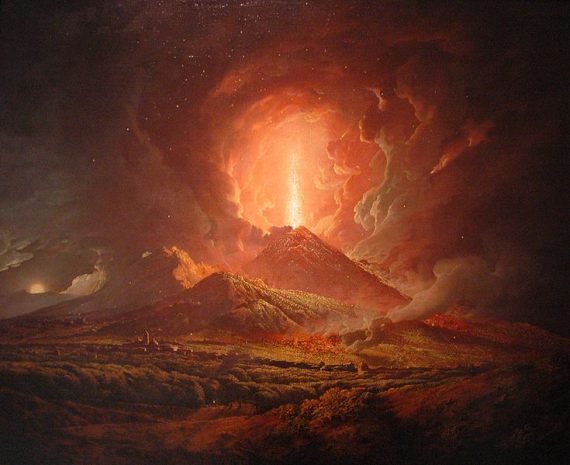 While the bodies frozen in time by the eruption and fast-falling pumice in Pompei get all of the publicity, Stabiae was ignored until the early 1900s when engineer Gennaro Matrone found more than 70 ancient skeletons, including one wearing golden necklaces and bracelets and holding a decorated sword. According to a recent article in Haaretz, Matrone tired to convince people this was Pliny, but no one seemed to believe him, so he sold the jewels, buried the bones and kept the skull, jawbone and sword. (Photo of the skull and jawbone can be seen here.) Those were later donated to the Museo Storico Nazionale dell'Arte Sanitaria (National Historic Museum of Healthcare Art) in Italy, where they were forgotten until recently when researchers decided to inspect them again.

Isotopes in the teeth showed they belonged to a person who spent their childhood in northern Italy, -- that’s where Pliny was raised. However, the wear on the teeth indicated the person was no older than 40 at death – Pliny was 56. Physical anthropologist Luciano Fattore, a longtime Pompeii and Vesuvius researcher, looked at the skull and determined it came from an individual between the ages of 33 and 65, the right age for Pliny. DNA tests run on both showed the jawbone came from a man whose ancestry could be traced to North Africa, while the skull was definitely from an Italic culture of the Roman period – the same as Pliny. What could explain the obvious difference?

Flavio Russo, an engineer, military historian and organizer of this latest research, thinks either the jawbone is from a second-generation African who grew up in northern Italy and became a sailor who ended up in Stabiae, or it's from a slave owned by Pliny’s family who became the Elder’s bodyguard and died with him in Stabiae. Fattore thinks the age of the skull is enough to make it Pliny. Russo adds the dot of a probable identity of the owner of the jawbone, which would support the other man being Pliny. The timing is right. Do the dots connect to form a confirmation that we’ve found the skull of Pliny the Elder? (Would this make a great movie starring Dwayne ‘The Rock’ Johnson?)

“We can never be completely certain. But so far none of our findings have contradicted this theory, and if anything, the evidence in favor of it just keeps mounting.”

Andrea Cionci, an art historian and journalist who first reported about the theory in Italy’s La Stampa newspaper in 2017, sounds more convinced than ever.

How will this affect sales of Pliny the Elder beer?

Vampire Star Sucks the Life Out of a Nearby Brown Dwarf