Call them crows. Call them ravens. Call them blackbirds. Call them rooks. Call them if you want to scare someone, because crows, ravens and the like have long been harbingers of death, doom and bad stuff in general. Well, if crows are a sign, it may be too late for the residents of the Hubei Province – ground zero for the deadly Wuhan coronavirus. Multiple videos have surfaced of unusually large flocks of crows in Hubei cities surrounding Wuhan. If that’s not enough, another video shows an invasion of giant mosquitoes outside of Beijing. And if THAT’S not enough, a farmer in Hunan bordering Hubei lost over 4500 chickens due to the highly-contagious bird flu. Which came first – the crows, the mosquitoes or the viruses? Does it matter anymore?

“Crows circling the sky in Jingzhou city (next to Wuhan) - Are they attracted by the smell of death? In Jingzhou, Hubei, the crow was about to move. Carnivores have a very sensitive sense of smell. They can smell the faint odor of the corpse at a long distance, and race to fly. The dying patient will emit a rotting smell that humans can't smell before death. Smell it.” 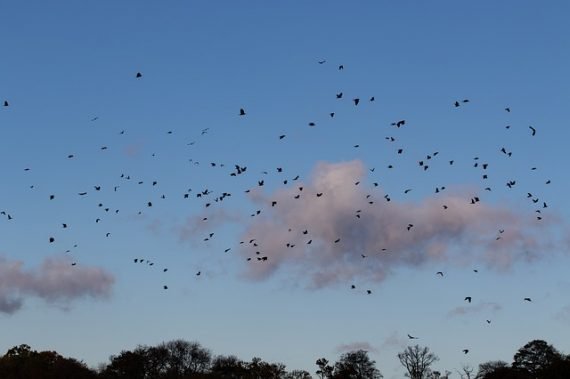 Epoch Times, Strange Sounds and the Wuhan News - World Breaking News YouTube channel have all been posting videos of the massive crow invasions around Wuhan in Hubei province. (See some of them here and  here and here.) In addition, Twitter feeds have also been posting video clips as government cracks down on conventional media reports to contain the damage, squelch rumors and avoid panic – good luck with any of those. The crow videos are generally from Yichang, Jingzhou, and Hanchuan in Hubei Province and started being posted around January 28.

At about the same time, a man in Beijing posted a video of an abnormal number of giant mosquitoes huddling under a highway ramp. A species of giant mosquito with a wingspan of more than 4 inches – making it the world’s largest -- was discovered in China in 2018. Mosquitoes of any size generally stay hidden until April and Chinese folklore says that an early showing means there will be an outbreak of contagious diseases. Like coronavirus? While it’s not known to be spread by mosquitoes, could a mutation get picked up by giant mosquitoes?

Speaking of contagious diseases, a bird flu outbreak was reported on February 1 in Hunan, which borders Hubei. where the coronavirus broke out in December. The H5N1 virus is highly infectious and causes severe respiratory disease in birds. The coronavirus is also a respiratory virus. The Chinese government has killed close to 20,000 chickens to control H5N1, which has a 60% mortality rate in humans. That could be worse among people whose respiratory systems have already been weakened by coronavirus. 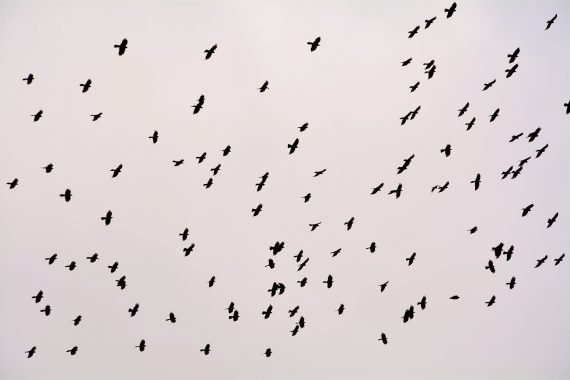 Is any of this linked to the massive flocks of crows? People in Houston hope not. Thousands of black birds known as grackles descended on a parking lot there recently, covering the ground, cars and any other surface. This is a growing phenomenon in Houston, but is it a harbinger? They hope not – it’s the fourth largest city, a leading port city and an immigrant city with a large Asian population.

Is the appearance of crows in Hubei, giant mosquitoes in Beijing and grackles in Houston a warning? Yes … it means we know little these viruses that have deadly consequences, so we still look for mythical causes just like our ancestors did. Just don’t go killing the crows, mosquitoes and grackles to alleviate your fears … you’ll only create worse problems.