Men in Black in Black Helicopters

Last Saturday night the History Channel's  Ancient Aliens ran an episode titled "The Real Men in Black." One of the lesser known aspects of the MIB phenomenon was discussed during the show. It was the connection between the Men in Black and the phenomenon of what have become known (primarily in the field of conspiracy theorizing) as black helicopters. As their title suggests, they are completely black in color - to the extent that they don't even have any identifying markings. Numerous alien abductees speak of black helicopters flying over their homes, and sometimes at perilously low levels. The black helicopters are also seen at the sites of cattle mutilations, too. As to who is flying them, well, that's a controversial issue. The most likely scenario is that the vast majority are flown by so-called "black ops" teams, who are engaged in clandestine operations - and not necessarily all connected to aspects of the UFO phenomenon. There are, however, a few cases on record in which the Men in Black play a role. I have to admit that while I have numerous reports of sightings of black helicopters, the numbers of cases I have that have a direct link to the Men in Black are absolutely minuscule. But, just the fact that there are a few such incidents requires our attention. And, we're not talking about guys in black, military SWAT-type outfits. Rather, we are talking about the black suits, the fedora hats, the pale faces and the skinny figures. That's right: the weird side of the MIB phenomenon. With that said, let's take a look at one of the very few such cases I have on-file.

It was late on the evening September 26, 1974 when the Richley family of Lynchburg, Ohio saw a strange object high in the sky above their home. That it was stationary and appeared to be circular in shape prompted Walter Richley to hit the UFO with the beam of a large searchlight that was affixed to his truck. The UFO responded by doing likewise: the truck was bathed with an eerie, red glow. Not surprisingly, the Richley’s raced for their home and locked the doors. Things were not quite over, however. A little more than twenty-four hours later, Walter’s son, Dan, was reading in bed when he heard the unmistakable sound of rotor-blades – seemingly almost outside the window. He flung open the curtains. Sure enough, a large helicopter was in view. Not only that, it was sitting on the ground, just a short distance from the family home. Dan quickly roused his father, who later told UFO researcher Leonard Stringfield: “I think I put my light beam on something that was a military secret. That ‘copter came here to warn me. I’m not about to press it; I’d rather forget it.”

There's a reason why I mention this case: eight months after the Richley encounter occurred, a black helicopter returned to Lynchburg. Not to the Richley home, I should stress. But, to the fairly isolated farm of a rancher in the area. In this case, the man woke up one morning to find a slightly burned, circular area in one of his fields. Luckily - and very oddly - the burning had not spread beyond the circular patch. Baffled and angry, the man called the police, who were soon on the scene. It's no surprise they had no answers for the irate farmer. That wasn't quite the end of it, though. Later the following night, in the early hours, the rancher and his family were woken up by the familiar thumping sound of a helicopter. The farmer jumped out of bed and raced out of the back-door to his field. There, in front of the farmer, was what was described as being a very small helicopter with a "bubble body" 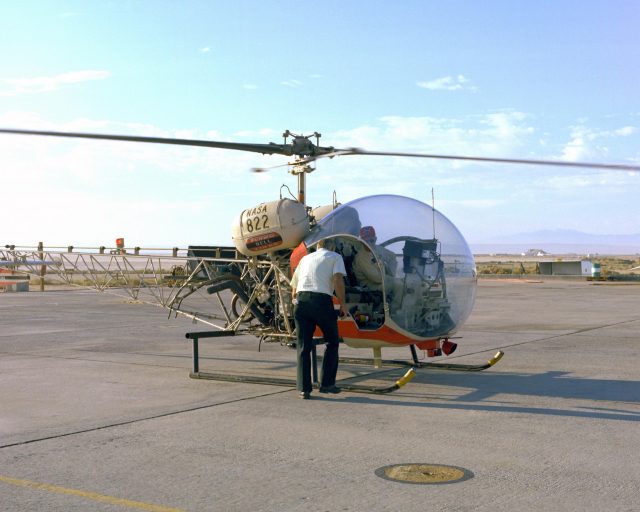 When shown photos of various helicopters by UFO investigator Leonard Stringfield, the man identified the helicopter as a Bell-47 - or, as something very similar to it. That wasn't the strangest part of the story, though. As the enraged and armed farmer raced to the area where the helicopter was sitting, he was suddenly approached - from the shadows - by two men that fit the picture of the MIB: suits, hats and a sickly, pale appearance. Nothing was said: instead, one of the MIB held up his hand and waved one finger at the farmer in a "tut-tut" style. What chilled the farmer more than anything else was the eerie grin the man had on his face. Or that it had on its face. The pair of MIB walked backwards to the helicopter, got inside and took to the skies. Later, the man could not fathom why he didn't take any action. I should stress, though, that those who encounter the real Men in Black often speak of being rendered into a strange, almost dream-like state - something that so often prevents them from taking action against the MIB.