Paleontologists generally agree that pterosaurs were the world’s largest flying animals. They also agree that they pre-dated birds and bats in the air. They used to agree that land-based Pterosaurs ate small dinosaurs, lizards and eggs, while those near water ate fish, mollusks and crabs. Not any more. A well-preserved 150-million-year-old fossil of a Plesioteuthis subovata – aka prehistoric squid – found recently in Germany contained an equally well-preserved fossilized tooth of a Rhamphorhynchus muensteri – a fish-eating pterosaur that attempted to eat the Jurassic-era squid … and didn’t get to tell its friends how good calamari tastes. 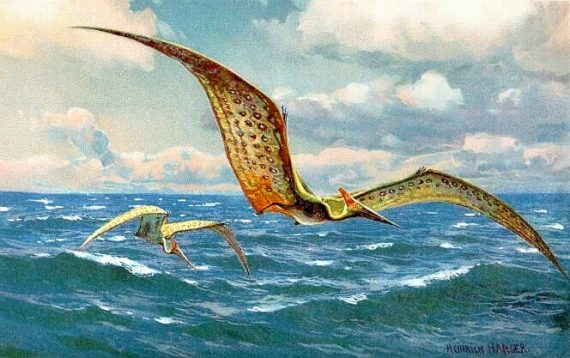 In a study published in the journal Scientific Reports, René Hoffmann, a postdoctoral researcher at Ruhr-Universität Bochum in Germany and an expert in prehistoric cephalopods, describes how he found the 11-inch-long fossil of a coleoid cephalopod – ancestor of squids and octopuses – in Germany’s Solnhofen fossil beds, a limestone formation filled with Jurrasec-era fossils. What intrigued him was the strange non-cephalopod tooth found with it. He recognized it as belonging to a Rhamphorhynchus muensteri, a smallish aquatic pterosaur with a five-foot wingspan, but needed the ultraviolet test to prove it had been embedded in the squid and not accidentally laid on top of it during fossilization.

The finding made a couple of firsts: first evidence of a pterosaur eating a cephalopod and first evidence of a “failed predation attempt” by any pterosaur. Since there were no eyewitnesses, Hoffmann used his imagination to describe to The New York Times what the encounter might have looked like. It started with the creature flying low over the water, scanning for fish like a modern pelican or hawk. Its shadow may have started a squad of squid and the creatures started hurling themselves out of the water, into the open beak of the pterosaur.

“Then the pterosaur grabbed one, but not perfectly.”

Since there has never been any evidence before of pterosaurs eating cephalopods, Hoffman thinks the large sea creature fought back in a way the pterosaur wasn’t prepared to deal with. After a lot of thrashing, a tooth broke off and flyer fled feeling fraught. Unfortunately, the encounter was eventually fatal to the squid, which sank to the bottom to be preserved as evidence of this historic battle. Does this change everything we know about pterosaurs? Is it movie-worthy?

“According to the fossil record, Rhamphorhynchus frequently were accidentally seized by large Aspidorhnychus. In some cases the fibrous tissue of the wing membrane got entangled with the rostral teeth such that the fish was unable to get rid of the pterosaur. Such encounters ended fatally for both.”

Maybe. Aspidorhynchus is an extinct genus of ray-finned fish from the Jurassic and Cretaceous periods. While it’s hard to imagine what kind of creature could bring down the largest pterosaurs, which had 19-foot wingspans and stood as tall as a giraffe, a previous study found that large fish attacked and ate the smaller Rhamphorhynchus for dinner. Perhaps a pseudo-documentary on the epic real battles of the Jurassic era would provide the action and violence modern movie-goers crave. Unfortunately, that wouldn’t leave any roles for Chris Pratt.

For now, we have a broken tooth and our imaginations.

Pilot Claims to Have Filmed UFO Over Medellín, Colombia