What sank the lost continent of Zealandia? If you said its crust was too thin to support this land mass – only recently (2017) confirmed to be a continent and not a piece broken off of the ancient supercontinent original continent of Gondwana – then you’re a follower of the conventional wisdom shared by most modern geophysicists (a good crowd to be in). However, this conventional wisdom may have been upended by an unconventional new theory that the demise of Zealandia was actually caused by the birth of something we’re still dealing with – not to mention fearing – today … the circle of active volcanoes known as the Pacific Ring of Fire.

“We propose a “subduction resurrection” model in which a subduction rupture event activated lithospheric-scale faults across a broad region during less than ~5 m.y., and tectonic forces evolved over a further 4–8 m.y. as subducted slabs grew in size and drove plate-motion change. Such a subduction rupture event may have involved nucleation and lateral propagation of slip-weakening rupture along an interconnected set of preexisting weaknesses adjacent to density anomalies.” 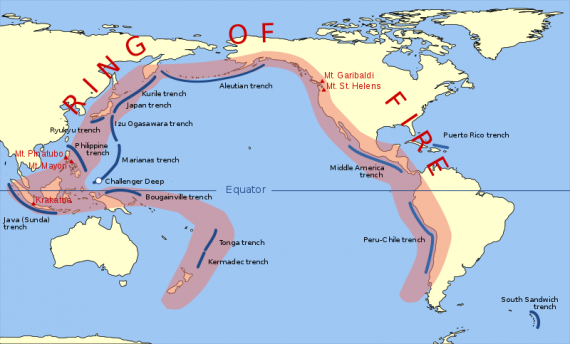 Run that paragraph, from a new study published in the journal Geology, through Google’s Geophysicist-to-English translator, and you’ll find it means that one tectonic plate converged on another and sank it (subduction) back deep into the earth, causing violent plate movements that enlarged a ring of pre-existing small ruptures until they simultaneously created a string of new supervolcanoes that became the Pacific Ring of Fire. If your browser doesn’t support the Geophysicist-to-English translator, study authors Rupert Sutherland, Professor of tectonics and geophysics and Victoria University of Wellington, and Gerald Dickens, Professor at Rice University in Houston, do a nice job in The Conversation of explaining what happened next.

“The subduction rupture event included unique geological phenomena that that have no present-day comparison, and there may have been fewer than 100 such massive events since Earth formed. Our new evidence from Zealandia shows these events can dramatically alter the geography of continents.”

“Alter” in this case means turn a continent into a lost continent. Zealandia today is 94% submerged under the Pacific, making it difficult to study. This is why it took until 2017 to confirm it was actually a continent. That’s when Sutherland, Dickens and a team of 32 scientists formed the Tasman Frontier Subduction Initiation and Paleogene Climate International Ocean Discovery Program Expedition (try fitting that on a T-shirt) to obtain new fossil samples that might better explain what sank Zealandia. They drilled holes up to 864 meters (2835 feet) deep where the water was up to 5 km (3.1 miles) deep at six remote sites to collect sediment samples from the center of the lost continent. Those samples contained the birth announcement of the Pacific Ring of Fire.

“We don’t know where or why, but something happened that locally induced movement, and when the fault started to slip, like in an earthquake the motion rapidly spread sideways onto adjacent parts of the fault system and then around the western Pacific.” 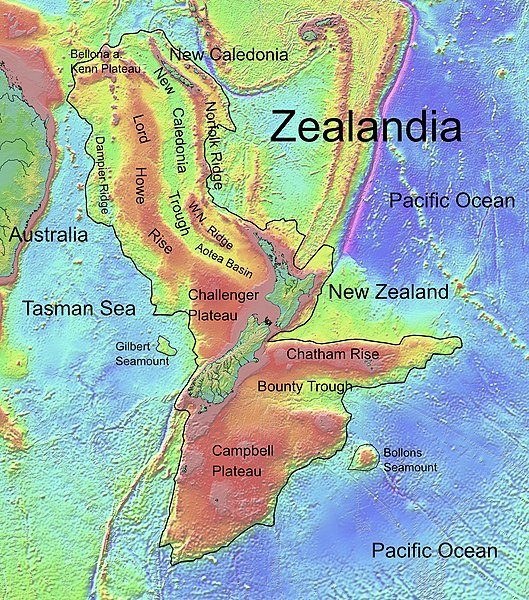 As Sutherland explained in a press release, this movement caused portions of northern Zealandia to rise 1-2 km (.6 to 1.2 miles) while other parts dropped underwater by the same amount sections until the entire continent sank to twice that depth and more. The study shows that this event coincided with “the bend in the Emperor-Hawaii seamount chain, the reorientation of numerous mid-ocean ridges, and the onset of subduction—and the related volcanism and seismicity” – events that signified the birth of the Pacific Ring of Fire, where today about 90% of the world's earthquakes occur and where all but three of the world's 25 largest volcanic eruptions of the last 11,700 years have taken place.

If the Ring of Fire caused one continent to sink, can it happen again? Sunderland admits that similar subduction rupture events have not been found … yet. But, now that they know what kind of geological records to look for, that may change. In the meantime, his group will be studying Zealandia to determent precisely how and why it sank and “what the consequences were for animals, plants, and global climate.”

Sutherland has an excellent philosophy that we all should consider:

A Handy Basic Guide to Types of Hauntings