Fans of Viking lore know that the most feared of the Norse warriors were the Berserkers – reckless, unpredictable and highly aggressive fighters who often attacked while shirtless … and sometimes even naked. While it makes for great TV and movies, being a bare battling Berserker doesn’t sound too bright – and a new study has found that these warriors may not have given much thought to their wild behavior because they were high on psychedelic tea. Wait a minute … Vikings drank tea?

“The berserkers were said to be not just ordinary warriors, but rather to fight while in a specific trance-like state, which was likely helpful in dissociating them from the close-up atrocities they would have seen and committed in battle. This state has been variously claimed to involve anger, increased strength, a dulled sense of pain, decreases in their levels of humanity and reason, behaviour akin to that of wild animals (including howling and biting on their shields), shivering, chattering of their teeth, chill in the body, and invulnerability to iron (swords) as well as fire. Additionally, they were said to attack enemies indiscriminately with no sense of friend or foe and to throw off their armour in battle.”

While this sounds like a rugby match (or soccer hooligans), it’s a description of the Berserkers by Karsten Fatur, ethnobotanist at the University of Ljbuljana in Slovenia who studies the relationships between plants and humans. In a paper published in the Journal of Ethnopharmacology, Fatur first looks at the generally accepted explanation for the fierce but wild behavior of the Berserkers – magic mushrooms. 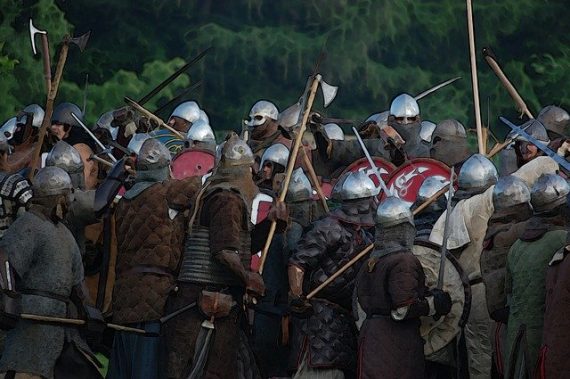 Specifically, fly agaric (Amanita muscaria), a hallucinogenic mushroom whose effects include auditory illusions, vomiting, hyperthermia, sweating, reddening of the face, twitching, trembling, dilated pupils, increased muscle tone, delirium, and seizures. All of those were apparently desirable behaviors in warriors, but Fatur saw one missing trait – extreme aggressive rage. For that, he looked through his ethnobotany seed catalog and came up with henbane or stinking henbane (Hyoscyamus niger), an herb dating back to the ancient Greeks whose uses include as a narcotic, painkiller, cure for insomnia, anesthetic, knock-out drug and truth serum. And … anger.

“This anger effect can range from agitation to full-blown rage and combativeness depending on the dosage and the individual's mental set … It would have reduced their sensation of pain and made them wild, unpredictable and highly aggressive. There may also have been dissociative effects, such as losing touch with reality. This might have allowed them to kill indiscriminately without moral qualms.”

In other words, the ultimate warrior … except for the wild and unpredictable parts. Accounts of Berserkers also say that the warriors had headaches and blurred vision for days after a battle – symptoms of henbane, not fly agaric. Finally, henbane is much more common in Scandinavia. All of that seems believable – except for the part about Vikings drinking the herb in tea. Not exactly known for having a cup with pinkies raised, Fatur also suggests it could have been rubbed on as a topical ointment, which is apparently how the ancient Greeks used it.

And yes, Berserkers is where the word ‘berserk’ originated. The Old Norse word "berserkr" means “bear-strong" or “bear shirt” and may have referred to the clothing of the warriors. Since bears are fearsome animals, the look helped their aggressiveness and the henbane their wild animal behavior. The traits later included supernatural powers, but today it just means out of control with anger or frenzy.

There’s some questioning of Fatur’s theory by Viking scholars, since there are no records of warriors ingesting any kind of drugs or strange substances before battle, but the effects of henbane match the Berserker behavior.

Even Vikings drank tea if it meant going berserk.