As we wait in anticipation for future life-seeking missions to Mars, asteroids and other space bodies in our solar system, speculation that these probes will find life forms is increasing, but most scientists agree that it will be bacteria or other microorganisms. One who doesn’t is leading British space scientist Professor Monica Grady.

"If there is something on Mars, it's likely to be very small—bacteria. But I think we've got a better chance of having slightly higher forms of life on Europa, perhaps similar to the intelligence of an octopus." 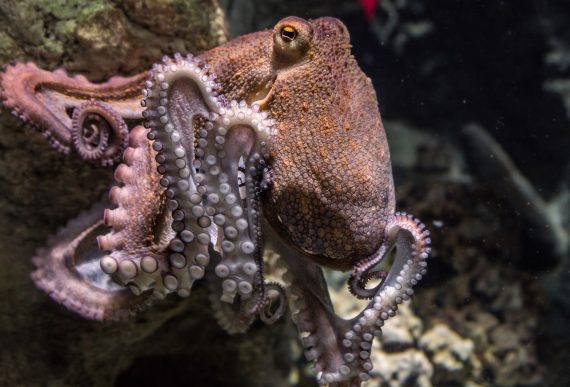 In a recent speech at Liverpool Hope University (covered by Phys.org), her first as the school’s new Chancellor, Grady explained that she’s confident Europa is home to higher-level life forms, but they’re in lower-level realms than on the surface. It’s slightly smaller than Earth’s moon but covered with a 15-mile thick layer of ice. That ice would protect creatures living underneath it from deadly solar radiation and asteroids – Europa’s atmosphere is too thin to protect it or support life. On the other hand, it’s likely that underneath all of the ice is liquid water of the salty kind, and hydrothermal vents that could spark the creation of life and then provide an environment to support it. If this sounds like Earth, Grady agrees.

“"But I think it's highly likely there will be life elsewhere—and I think it's highly likely they'll be made of the same elements. Humans evolved from little furry mammals that got the opportunity to evolve because the dinosaurs were killed by an asteroid impact. That is probably not going to happen on every planet—but it's at least possible based purely on a statistical argument.”

“I’m fairly specified we’re all there is at our amount of intelligence in this planetary method. And even if there are octopuses on Europa, that does not give us a cause to damage our planet.”

Describing the chances for finding intelligent life at our level (we can debate the notion that we’re not so intelligent at another time) in the Milky Way as highly unlikely, Grady sees us as galactic environmentalists – protecting both our planet and any space body we set foot or probe on. Her choice of “octopus” to describe the highest level of life we might encounter may just be a backhanded reference to the movie ‘Europa Report’ in which the first mission to Europa discovers a tentacled, bioluminescent creature described as a cross between an octopus and a squid. On the other hand, many people believe that the mammal-like intelligence of octopuses is because they’re aliens on Earth. Could they be from Europa?

We’ll have to wait for the anticipated Jupiter Icy Moon Explorer, Europa Clipper or Europa Lander missions to find out.

Or, we could figure out a way to talk to an octopus.

The (Alleged) Time-Traveling Woman and Her Cell-Phone: 10 Years Later