They call it “Monkey Island,” but no one is really sure what kind of mutant creatures actually live on a mysterious island off the coast South Carolina because visitors are banned by the federal government. The only inhabitants are rhesus monkeys that were experimented on by the National Institute of Allergy and Infectious Diseases (NIAID) and nothing is known to the public about what these poor creatures may have been turned into … until now. A woman walking her dog on a South Carolina beach recently stumbled upon the remains of a creature that defied her knowledge of known animals and her imagination. Is Monkey Island a real Island of Doctor Moreau? Are she and her dog in danger after having gotten close to (and in the dog’s case, sniffed and touched) the strange creature that may be from the mysterious island?

"I honestly did not know what it was. It was the size of a small dog, but the structure of the whole thing suggests it's definitely not a dog.”

While walking her own small dog, River, on a beach called Sunrise Park, Erika Constantine explains in a video (watch it here, see photos here) how she and River came upon the odd skeleton. In its severe state of decomposition and partial loss of bones, it’s difficult to say for certain what the creature may have once been, and comments on her video ranged from possum to bobcat to seal to … you knew someone would say this … Chupacabra.

"I have lived here for about five years and I have never come across something like this." 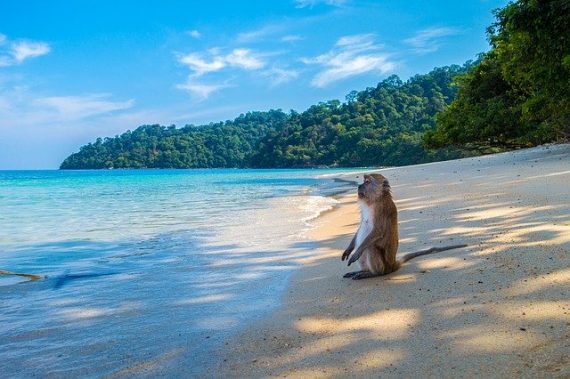 However, that’s long enough for Constantine to have heard about Monkey Island. It’s real name is Morgan Island and this 4,489 acre marshland island off the coast near Beaufort is owned by the South Carolina Department of Natural Resources but has been isolated from the public since the 1970’s by the National Institute of Allergy and Infectious Diseases which uses it to house over 3,500 rhesus monkeys which were used in a wide variety of experiments (use your imagination – it’s the National Institute of Allergy and INFECTIOUS Diseases) before being deemed no longer useful.

“Morgan Island lies off the northern shore of St Helena Island on St. Helena Sound. Strong tides and wide marshes lend to its remote beauty that both limits human interaction and prevents any monkeys from casually escaping. If you wish to take a short journey to visit these transplanted jungle inhabitants you will need to arrange a boat ride or prepare for a day of kayaking.”

The State tells the best way to get there and why it’s the perfect (or maybe not) location to keep the possibly-mutant monkeys from escaping. It recommends a morning trip for seeing hundreds of the monkeys on the beach or in trees near the shore, and warns that trespassers “not only face stiff fines but also danger from untamed monkeys.” The monkeys are fed by an automated system under the management of Charles River Laboratories … and that’s where the plot thickens.

Charles River Laboratories owns or manages a number of animal facilities that have been the target of animal rights activists due to serious problems -- monkeys suffering 'accidental' amputations, poisonings, scaldings, overheating and more. At least one facility it managed has been closed down due to problems and protests. The company has also had similar incidents involving dogs and other animals in the facilities it oversees. 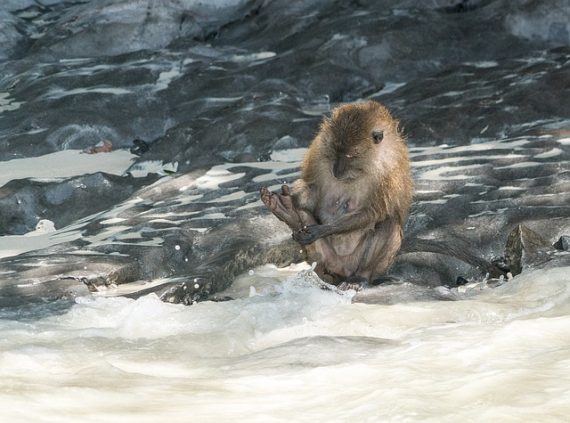 "I think one of the monkeys from Monkey Island unfortunately might have got swept up in a current, the rip tide or whatever and then it made its way to Charleston. It wouldn't really be the first time, my friend actually found a monkey fossil on the beach a while back, so I think it just kind of got washed up here."

How many more monkeys may have escaped from Monkey Island and have not been discovered or reported? With the history of Charles River Laboratories, the current outbreak of coronavirus and, as of this writing, no explanation or identification of the creature found on a South Carolina beach, this warrants concern and deeper investigation.