One of the most confounding things about strange creatures is their curious connection to ancient stone circles, sites of archaeological significance, and historical burial mounds. The United Kingdom’s most famous stone circle, Stonehenge, is situated on the vast and sprawling Salisbury Plain, which is located in the green and hilly county of Wiltshire. Notably, sightings of strange creatures near this approximately 5,000-year-old Neolithic stone structure are far from uncommon; the Neolithic period. As just one example of many, Merrily Harpur, a researcher of large, anomalous black cats in the U.K., interviewed a former member of the British Army named George Price, who had a sighting of a huge, orangutan-like animal on Salisbury Plain in 2002. The English county of Kent is home to a small village called Blue Bell Hill, which happens to be the site of a Neolith era formation of stones called Kit’s Coty House. It’s a structure that may have doubled as a site for human sacrifice and as a memorial to ancient, fallen warriors of renown. It’s notable that numerous sightings have been made at Kit’s Coty House – usually late at night, and often when the Moon is full and a cold wind howls – of semi-spectral, primitive-looking people, dressed in rags and animal skins, lurking among the old, long abandoned stones.

England’s Peak District is the site of a millennia-old stone circle known locally as the Nine Ladies. What can only be described as a hulking, British Bigfoot was seen in the area in 1991. The Bronze Age Rollright Stones of Oxfordshire are haunted by a large, shaggy beast that is a strange and savage combination of ape and wolf. Lustleigh Cleave is an earthworks built in Neolithic times and which is located on Dartmoor, Devon, where Sir Arthur Conan Doyle set his classic Sherlock Holmes novel, The Hound of the Baskervilles. The deadly dog of Doyle’s acclaimed story was fiction. The hairy “cave men” that, for centuries, have been seen roaming around Lustleigh Cleave on starlit, winter nights are most assuredly not. 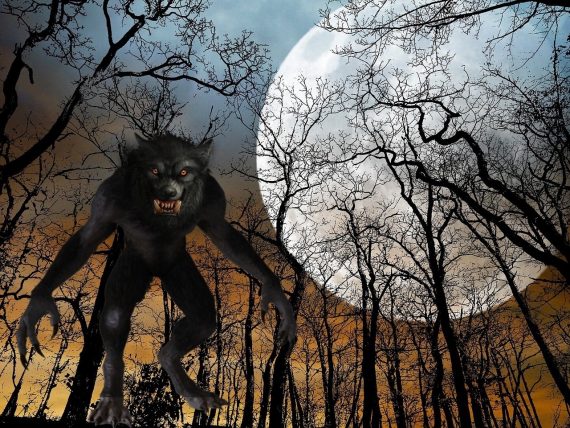 So, what’s going on? Why are monsters and strange creatures so inextricably linked to old stone circles and formations? A notable theory comes from Linda Godfrey, a resident of Wisconsin and someone who has extensively investigated, and written about, bizarre animals in her home state, as well as across the entirety of the United States. In the same way that unidentified creatures are seen in the direct vicinity of stone circles in the U.K., Linda has noted that such is also the case in the United States, where similar “things” are encountered near old Native American mounds – and particularly so beasts that sound chillingly like real-life werewolves.

Linda says: “I can tell you that Native Americans from various locations have indicated to me that these things absolutely exist, as do zoomorphic [animal-shaped] spirit guardians made to watch over sacred grounds.” This is a fascinating scenario: ancient man may very well have tapped into a hard to define realm of the supernatural and duly called forth fantastic beasts to act, in essence, as paranormal guard dogs of revered sites of a mystical nature. All of which brings us to the matter of the monsters of Loch Ness. It’s a little-known fact that the loch itself has its very own, and very mysterious, stone structures. Should we simply chalk this up to coincidence? Based on what you are now about to read, my answer to that question can only be a decisive No.

The summer of 1976 was noted for being one of the hottest on record in the U.K., something that anyone of a certain age, and who lived through it, can attest to. By June, the temperature was already up to the mid-80s Fahrenheit. On July 3, it peaked at a pulverizing 96.6 Fahrenheit, which is certainly hot for the U.K.! That scalding period was noted for something else too: an American named Marty Klein was at Loch Ness, as part of an expedition to find evidence of the existence of its famous creatures. It was an ambitious quest organized and sponsored by the Boston, Massachusetts-based Academy of Applied Science and the New York Times, and headed by long-time Nessie-seeker, Dr. Robert H. Rines. It was also a project that saw the AAS team capture some intriguing sonar imagery, including one – dubbed the “average plesiosaur” – that seemed to show nothing less than a long-necked carcass in deep waters off Fort Augustus, Loch Ness. But, there was something else that Klein and his comrades found – something that was as amazing as it was surely totally unanticipated. 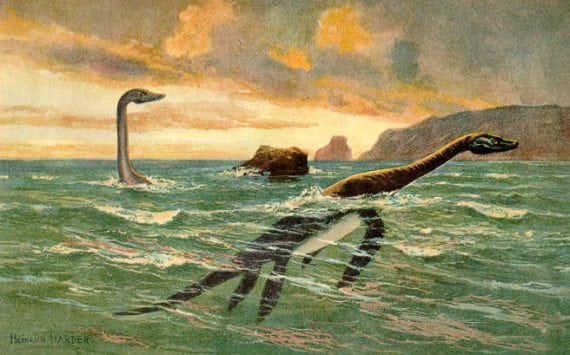 While using side-scan sonar technology in the waters near the village of Lochend – which can be found on the northeastern end of the loch - the team stumbled on something hitherto unknown: two curious formations, one in water of a depth of barely thirty feet, and another at a depth of around seventy feet. They were described as “a mother lode of stone circles – big ones and little ones; single circles and circles intertwined with others; circles laid out in a straight line and circles in no particular order.” Given that Marty Klein was the key figure in the discovery of the stones, they became known – almost inevitably – as Kleinhenge I and Kleinhenge II. In terms of size, the circles ranged from fifteen to one hundred and fifty feet in diameter. And, to varying degrees, they overlapped.

Not everyone was sure that the henges had Neolithic origins, which was something quickly suggested by the AAS when the formations were found. One J.D. Mills, of the Surrey, England-based Underwater Instrumentation, offered the theory that the stones were nothing stranger than material dredged from the nearby River Ness when the building of the Caledonian Canal was underway, early in the 19th century. But, is this really all there was to the Kleinhenges? Others have suggested that such a down to earth explanation is very wide of the mark. When the story of the stone circles of Loch Ness got out, Klein and a colleague, Charles Finkelstein, told the Chicago Tribune’s John Noble Wilford that while a great deal of further research was required, it was their initial conclusion that the formations were fashioned by human hand and that they quite possibly dated back thousands of years, and to a time when the waters of the loch were at much lower levels than today. Then, in 2005, Robert Rines commented on yet more curious formations of stones found in the deep waters of Loch Ness. Loch Ness Monster authority, Roland Watson, has mused on – but is admittedly not persuaded by - the idea that the sunken stones referenced by Rines in 2005 were a by-product of the completion of the Caledonian Canal in 1822, or of the widening of the A82 road back in the 1930s. And the controversy does not end there.

There is an undeniable similarity between Kleinhenge I and II and what are known as the Balnuaran of Clava, or the Clava Cairns. Like the previously mentioned Kit’s Coty House and Lustleigh Cleave, the Balnuaran of Clava date back to the Neolithic era, and probably around 2,000 BC. In essence they are a trio of burial chambers, found above Scotland’s River Nairn and amid enchanting woodland, and which are positioned in north-to-east and south-to-west directions. The passages leading to the chambers were created in a fashion that deliberately aligned them to the setting of the midwinter Sun. Clearly, then, the construction process was a matter of deep importance and significance to their creators. Just like the Kleinhenges, the Clava Cairns are comprised of stones, pebbles, and even boulders, which are heaped together in circular, raised formation. As for their purpose: to act as sacred burial chambers for the elite figures of the tribe in question; a theory bolstered by the fact that when the tombs were excavated in both the 1800s and the 1950s, the cremated remains of a number of select people were found within. Very interestingly, the Clava Cairns are located  east of Inverness, and only a short drive from Loch Ness. Of equal note, the River Nairn  - on which the cairns stand - flows into the Moray Firth, as does the River Ness, the latter having been the site of a number of creature encounters, including the now legendary and famous 565 AD account of St. Columba. 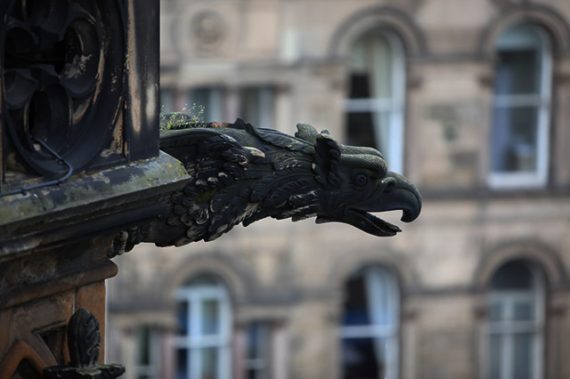 Adding even more monster-based weirdness to the story, the River Nairn flows by the site of a historic April 16, 1746 confrontation. Its name: the Battle of Culloden. Scottish lore tells of how, on the night before the violent battle began, a huge, monstrous, bird-like beast was seen hovering and flying above the battlefield. Known as the Skree, this creature had eyes that blazed red, and large and membranous wings like those of a hideous, devilish bat.  The creature was seen as a decidedly ill-omen, a precursor to the death and tragedy that loomed on the horizon for the forces of Bonnie Prince Charlie and those of George II. It was a battle that brought to an end what was known as the Jacobite Rising.

So, what we have here, within the waters of Loch Ness, and at the Clava Cairns - on the nearby River Nairn - are curious stone structures that are eerily similar. Loch Ness is home to one of the world’s most legendary cryptids. The nearby River Nairn is linked to sightings of a flying, fiery-eyed monster. And the Clava Cairns were created to house the cremated remains of tribal chieftains.  All of this brings us back to Linda Godfrey’s comments in relation to Native American lore. Namely, that animal-shaped spirit guardians – summoned up via magical rite in the distant past - possibly watch over and protect sacred and significant sites. Just perhaps, then, athe Nessies are similar spirit guardians. They may still faithfully watch over the now-sunken, old, stone circles of Loch Ness - ones that were constructed millennia ago by a tribe of people largely now forgotten and lost to the fog of time.

Whatever’s Going On With Betelgeuse Just Got a Lot Weirder