The Amazing Case of the USS Nimitz UFO Encounter

In November of 2004, the U.S. Navy USS Nimitz Carrier Strike Group was on combat training maneuvers in the Pacific Ocean, just about 100 miles off the coast of San Diego, California, in order to prepare for upcoming deployment to the Persian Gulf. This was not unusual in and of itself, and it was a perfectly normal series of operations they were engaged in, but things would soon get very weird indeed, and would launch one of the strangest and most talked about military UFO encounters on record.

It was all supposed to be a routine combat training exercise, but things would soon get strange when over a period of several days the Ticonderoga-class guided missile cruiser USS Princeton began picking up frequent radar signatures of unidentified aircraft of some sort on their cutting edge AN/SPY-1B passive scanning phased array radar. These objects were very odd in that they were numerous and seemed to be travelling at an altitude of up to 80,000 feet, far beyond what any normal aircraft would be operating at. The radar hits were very persistent and happened often, with well over 100 of the objects supposedly tracked over the course of the week, usually in formations of up to 8 to 10 at a time, and it was so odd that the radar operators at first thought it had to be some sort of equipment glitch, yet they recalibrated everything and it was all found to be in working order. At times the crew would try and get some sort of visual confirmation of what they were picking up but it was difficult to make out clearly even with binoculars. Whatever it was, it was certainly strange, and one of the radar operators, Petty Officer 3rd Class Gary Voorhis, would later say of the objects:

Once we finished all the recalibration and brought it back up, the tracks were actually sharper and clearer. Sometimes they’d be at an altitude of 80,000 or 60,000 feet. Other times they’d be around 30,000 feet, going like 100 knots. Their radar cross sections didn’t match any known aircraft; they were 100 percent red. No squawk, no IFF (Identification Friend or Foe). When they’d show up on radar. I’d get the relative bearing and then run up to the bridge and look through a pair of heavily magnified binoculars in the direction the returns were coming from. I couldn’t make out details, but they'd just be hovering there, then all of a sudden, in an instant, they’d dart off to another direction and stop again. At night, they’d give off a kind of a phosphorus glow and were a little easier to see than in the day.

The crew continued to keep their eye on the phenomena until they were alarmed to see that some of the objects seemed to at times carry out rapid descents in altitude that took them well into commercial airspace, and this was where things would get weird. On November 14, 2004, it was decided that some sort of action should be taken, and two F/A-18F Super Hornet fighter jets from the USS Nimitz piloted by Commander David Fravor and Lt. Commander Jim Slaight were told to break off from their training maneuvers in order to go investigate an object that had appeared to drop towards the ocean surface on radar. Although they were not carrying live weaponry, the fighters were told to fly by and see if they could make visual confirmation of anything out there and report back. It was clear, calm weather, and the pilots were certain that if there was anything to this then they would soon figure out what the mysterious object was, and they were not wrong. The problem is, it was far from what any of them had imagined.

As they scanned the area the pilots allegedly saw something causing a disturbance in the water, where it seemed as if the waves were breaking over an oval shape under the surface. At precisely the time they noticed this odd sight, a bright, white object shaped like a “Tic-Tac” reportedly suddenly appeared nearby, hovering around 50 feet over the water. This startling object was estimated as being around 30 to 46 feet long, and oddest of all was that it had no noticeable ports, windows, rotors, wings, or any visible method of propulsion. The pilots attempted to approach the craft, after which it launched into a breathtaking display of maneuvers and erratic movements which seemed to defy physics, of which Fravor would say, “This thing would go from one way to another, similar to if you threw a ping-pong ball against the wall.” It then sped away with a rate of acceleration that left the experienced pilots in awe.

The pilots tried to pursue the “Tic-Tac,” but it accelerated at an astronomical rate, and according to Fravor “was just gone.” Oddly, the object soon after appeared around 60 miles away near the combat air patrol (CAP) rendezvous point “within seconds,” suggesting that it was travelling at speeds twice as fast as the F-18s and an estimated three times the speed of sound, the whole time demonstrating what was called “an advanced acceleration, aerodynamic, and propulsion capability.” Other fighters were launched in response, but the object soon sped away again to disappear. Fravor was so impressed by the object that he would later say, “I have no idea what I saw. It had no plumes, wings or rotors and outran our F-18s. But I want to fly one.” Another wingman who was with them at the time would comment, “It was so unpredictable—high G, rapid velocity, rapid acceleration. So you’re wondering: How can I possibly fight this?” Other witnesses to the event were equally as baffled as the pilots, with one Petty Officer 3rd Class Jason Turner later saying of the object and its physics defying display:

This thing was going berserk, like making turns. It’s incredible the amount of g forces that it would put on a human. It made a maneuver, like they were chasing it straight on, it was going with them, then this thing stopped turning, just gone. In an instant. 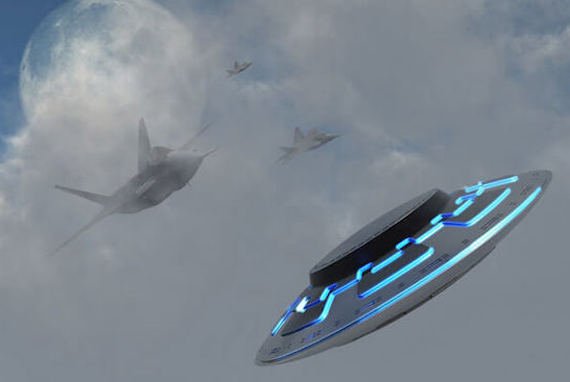 The whole incident was causing a big stir at the time, and making it all even more impressive was that one of the fighters in the second wave of pilots had managed to capture footage of the object with an infrared camera system, called a FLIR pod, but this would be kept under wraps for years. In fact, the USS Nimitz UFO encounter would largely be buried and kept from the public until 2017, when a clip of the footage was acquired and leaked by a UFO organization called the To the Stars Academy, which was co-founded by Blink-182 frontman and major UFO buff Tom DeLonge, followed by an article the New York Times ran on the incident, and it all immediately caused a firestorm of debate and discussion. Was it real, was this a hoax? No one knew, but everybody seemed to be talking about it.

The footage made major waves at the time, and this was all ramped up when the U.S. Navy finally admitted that the footage was indeed real, that it had indeed been taken by infrared cameras aboard their aircraft, and even released further clips of the incident, complete with audio of the pilots marveling over what they are looking at. The Navy also said that they were putting new protocols into effect for dealing with unidentified craft encountered by pilots in incidents such as this and others like it, as well as that they were funding a program called the Advanced Aerospace Threat Identification Program.

Even with this official release of information the conspiracy theories swirled that this was only the tip of the iceberg, and that they were in possession of longer video footage and other data on the incident. This would only be fanned by an investigation into the incident carried out by Popular Mechanics, which interviewed numerous people who had been involved in the event and uncovered evidence that there were some shady things going on in the wake of the incident. One anonymous witness they managed to track down identified as an Operations Specialist aboard the USS Princeton at the time would give a comment on the incident and explain that much of the data was suddenly seized and whisked away, saying:

I do remember the events of 2004 very well. The decision was made to scramble two fighter jets to investigate. From what the pilots described, the movement of the UFO was defying the laws of physics. What really made this incident alarming was when a Blackhawk helicopter landed on our ship and took all our information from the top secret rooms. We were all pretty shocked and it was an unspoken rule not to talk about it because we had secret clearances and didn’t want to jeopardize our careers.

This was corroborated by others who were present, such as the radar operator Voorhis, who also said that a helicopter landed and he was told to hand over all the data recordings for the AEGIS system. Others have also insisted that a substantial amount of the 8mm footage of the incident was confiscated by this unknown party, and insist that what was released is only snippets. This has only furthered conspiracy theories and discussion surrounding the event, and the USS Nimitz UFO encounter is just as mysterious as it has ever been, the Navy very tight-lipped about offering any official statement on what is seen in the videos and wary of any speculation on the matter, merely saying that what is seen in the videos is unidentified.

This of course has not stopped widespread speculation on the incident, and various theories have been proposed for the mysterious object and what the pilots experienced. One idea is that this is indicative of perhaps some sort of top-secret aircraft or advanced reconnaissance drone test, utilizing never-before-seen technology. This seems plausible on the surface, but if that were the case why would it be tested so close to where a carrier fleet was in the middle of performing military combat exercises? There is also the fact the most researchers, journalists, and military personnel willing to talk about it are adamant that no one has technology anywhere near what was reported and what is seen in the videos. Other ideas are that this was all due to equipment malfunction, pilot error, or even weather balloons or some misidentified natural atmospheric phenomena, but this is all still unsatisfactory as the incident was witnessed by numerous highly qualified personnel and pilots and was observed both visually and with corroborating radar. It is this perfect blend of photographic evidence and highly reliable witnesses that has made the case so persistent. What happened out there during that training mission? Was this drones, experimental aircraft, pilot error, or something not of this world? No matter what the real answer may be, the USS Nimitz UFO encounter remains one of the most spectacular, well-documented military accounts there is, and has remained very much discussed.