In the world of cryptozoology, that is, the search for undiscovered or previously thought to be extinct animals, there have been reports over the years that really run the range. You have your so-called "rock stars" such as Bigfoot and the Loch Ness Monster, backed up by significant corroborating reports, and then you have the rather weirder subspecies of cryptid reports, those that just float around in the nether regions of the odd. Here we have encounters that seem to be one-off anomalies of things that are seen in places they have no business being, with no other accounts whatsoever to lend them any further weight and which just seem to exist in a sort of limbo state where the best they can do is cause shoulders to shrug. These are the cases that just seem to exist within a vacuum, alienated by their own bizarreness and just sitting there waiting for answers, and one of these truly outlandish cases is the time giant white sloth monsters invaded a New York farmstead.

A really quite bizarre encounter that sort of sits all alone by itself is a case from the town of Sherman in the western most portion of the State of New York in the 1960s. Here, a 15-year-old unidentified boy allegedly lived with his family on a rural slash of property skirted by thick swampland, and it is from this tangle of boggy, dim wilderness that something truly strange would emerge to harass the family. The boy describes how a pair of enormous, sloth-like beasts with shocking white fur would come shambling out of the swamps to roam about the property before crashing back out through the brush to wherever it is they came from. The witness describes the creatures thusly:

I saw a white monster in a swamp beside our house. I have been seeing these things ever since then and close to our house. One night it came down in our yard. It stands between twelve and eighteen feet high, it has a long tail between six and eight feet long. It is all covered with hair. They are always white. I have seen them alone or two at a time. It can walk on two feet or four feet. It is almost a double for a Prehistoric Sloth. My whole family has seen this thing and I know of two more men who have seen them. I am not kidding. I have seen these things and they are real. 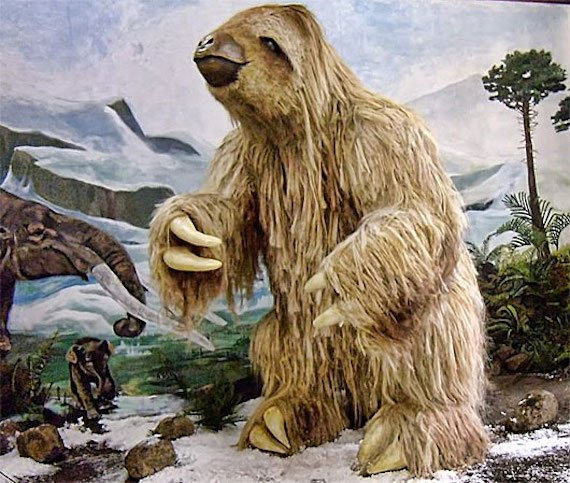 It is a shame that this is just about all of the information we have on this report, as it comes from a rather obscure little mention by John Keel, most famous for his book The Mothman Prophecies, in his lesser known book The Complete Guide to Mysterious Beings. It was originally from a letter sent to Keel by the witness, which then found itself tucked away within the book lost among various other reports of cryptids and other weirdness. The letter is so brief and it is added in there as almost an afterthought, so we are left with no other information or follow up, nor even a name for the witness, whose name was either redacted by Keel or was unknown to begin with. Keel must have thought the report was worthy of mention or he would have never included it, but it is maddeningly brief, leaving us to speculate on what the “Beasts of Sherman” are and whether they were ever even real at all.

The closest known cryptid that even comes close would probably be one of the most infamous cryptid beasts said to wander the jungles of the Amazon rainforest, known as the Mapinguari, which translates roughly to “the roaring animal,” or “the fetid beast,” and it is also known by names such as capé-lobo (wolf’s cape), mão de pilão (pestle hand), and pé de garrafa (bottle foot). Reported mostly from the dense mostly unexplored rainforests of Brazil and Bolivia, the Mapinguari is said to be a huge, sloth-like creature which stands over 6 feet in height, with reddish fur and wicked curved claws, is said to emit an ear piercing, bloodcurdling scream, and to carry with it a fog of a nearly unbearable, staggering stench that purportedly disorients those who have a whiff of it. The creature is said to follow about herds of peccaries, to avoid water and, while it mostly avoids humans, will bravely defend its territory if necessary. It is also said to have hide so thick that it is essentially bulletproof.

The creature has long been reported by local tribes of the region, who say that it is mostly nocturnal and vegetarian, feasting on the innards of trees that it pulls apart with its massive claws. Although well-known to the natives of the region, the Mapinguari is also known from numerous reports from outsiders as well. In one such account from 1975, a hunter by the name of Mário Pereira de Souza was out hunting peccaries by the Jamauchim River when a shaggy creature with curved claws came stumbling towards him from the underbrush. The beast was said to have a stench so horrifically potent that it made him dizzy and had him reeling for days on end after the encounter. 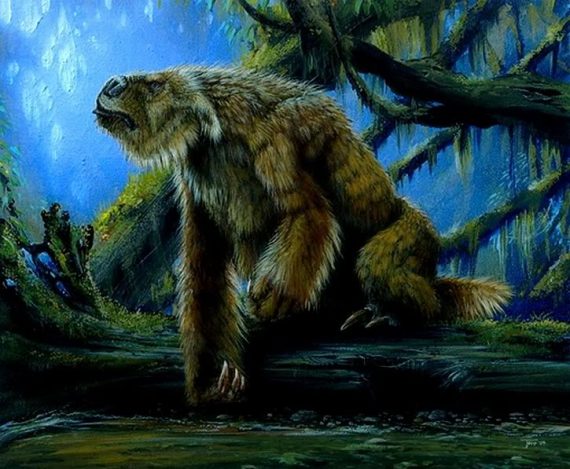 In the late 1990s, hunter Manuel Vitorino Pinheiro dos Santos had been out hunting for white-lipped peccaries when he and his team smelled an odoriferous, pungent stink, punctuated by a gurgling cry from the heavy underbrush not far from their position. Dos Santos allegedly immediately dropped the kill that he had been carrying and ran towards the nearby river in a panic, when he heard another more intense bellow from the jungle, which he said seemed to shake the trees themselves, followed by more such shrieks that seemed to get farther and farther away. Dos Santos claims he cowered chest deep in water until he deemed the creature to be a safe distance away. He eventually saw the source of the strange noise, and described the beast as looking like a hulking, armored bear-like body topped with the face of a monkey and enormous claws like those of an armadillo.

There have been some efforts in recent years to try and track down the elusive Mapinguari, such as an expedition led by a David C. Oren, ornithologist and expert on Amazonian biodiversity at the Emílio Goeldi Museum in Belém. Oren has risked ridicule from his peers leading several expeditions into the Amazon looking for the creature since 1994, braving harsh conditions replete with stinging, biting insects, parasites, deadly disease, nearly impenetrable jungle, and other hazards in order to try and hunt down the origin of the mystery. Although he has not actually seen one, he has uncovered nearly a hundred fairly convincing accounts of the creatures from local tribes. He has also managed to uncover clumps of hair, footprints, and scat samples of the alleged creature, none of which have proved to be conclusive. 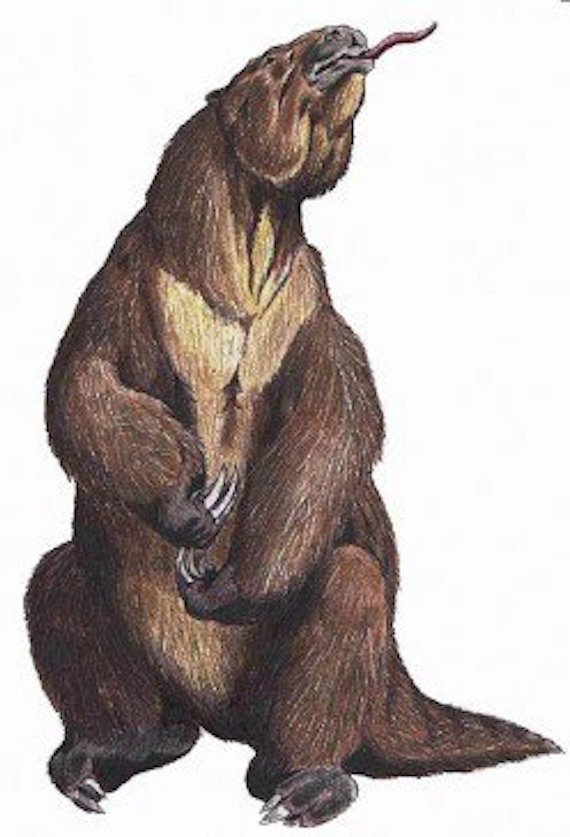 There have been several theories on what the mysterious Mapinguari could be. One is that it is mere Amazonian folklore, and indeed the creature is heavily featured in myths of the region, which claim it is the spirit of a shaman who had found the forbidden secret of immortality and was subsequently punished by the gods to spend eternity in the body of a twisted beast. Other descriptions of the creature also point towards a purely mythical construct, such as depictions of it having only one eye, with a mouth in the center of its stomach, or feet that point backward. Those who put weight in the possibility of a real animal have pointed out that it could be a surviving population of extinct giant ground sloths such as Megatherium or Mylodon, which died out at around 10,000 years ago. These were huge beasts which stood up to 10 to 20 feet high and which in many ways match the descriptions of the Mapinguari, including the massive bodies, the ability to be semi-bipedal, reddish hair, and long, curving claws. This theory was embraced by the famed cryptozoologist Bernard Heuvelmans, who went into detail on it in his seminal work On the Track of Unknown Animals. Other theories suggest some type of surviving giant anteater or even an undiscovered large Amazonian primate.

You might have noticed by now one problem with the Mapinguary as it relates to the Beasts of Sherman, and that is that the Amazon is nowhere near New York, not even close by any reasonable metric, so why would anything like that be here? There is absolutely no way to know, and no way to even follow-up on the case as it is just a brief mention from some kid who sent a letter to a paranormal researcher and somehow managed to make its way into a book. It is a mostly obscure, forgotten report that we have no way of verifying, and as such it seems destined to remain in that limbo of other such reports that describe otherworldly entities seen only once, destined to be forever out of our ability to understand them.

1,200-Year-Old Board Game Piece Discovered on Site of First Viking Raid in UK