The Mysterious Giants of Peru

One strange area of the world of the weird is that of actual giants having once existed upon this earth. There are numerous reports of this throughout history, of which I have covered here before, on more than one occasion. Such tales really serve to stir up the imagination, the idea of these enormous beings living amongst us alluring to say the least, and one place that has a surprising number of accounts of evidence of supposed giants lumbering through the wilderness is the South American country of Peru.

Accounts of the giants of Peru date back to at east the 16th century, when Spanish conquistadors were penetrating into this uncharted, unknown land seeking to tame and control it. One such early account was written of by explorer and conquistador Pedro Cieza de Leon, in his tome Royal Commentaries of the Incas, volume I. He wrote that the natives of the region told of a time when massive giants came one day to their shores upon enormous and crude reed rafts to land at the peninsula of Santa Elena, after which they apparently set up a camp and dug extremely deep wells for water. These giants were said to be epically proportioned, and De Leon described them thusly:

Some were so big that an ordinary man of good size scarcely reached up to their knees: their members were in proportion to the size of their bodies, and it a monstrous thing to see their enormous heads and their hair hanging down about their shoulders. Their eyes were as large as small plates. They say they had no beards and that some of them were clad in the skins of animals, and others only in the dress nature gave them. There were no women with them. On reaching this point, they set up their camp like a village (and even in these times there is a memory of the site of their houses). As they found no supply of water they remedied the lack by making some very deep wells, a labor certainly worthy of record, being undertaken by such strong men as these must have been, to judge by their size. They dug these wells in the living rock until they came to the water, and afterwards they built the wells in stone from the water line upwards so that they would last for ages. In these wells the water is excellent and it is always so cold that it is very pleasant to drink. 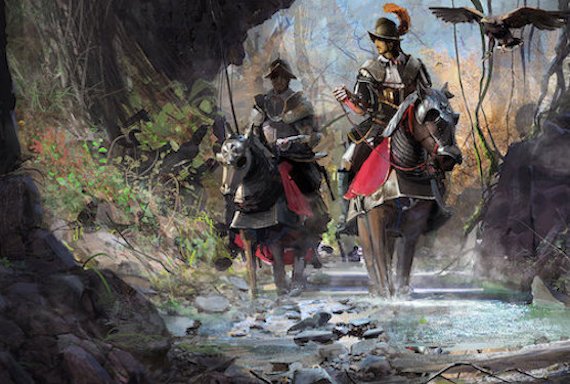 He goes on to say that according to the natives these giants then went on a bloodthirsty rampage, raiding villages and devouring anything they could get their hands on, including human beings. It would have been a terrifying sight to see, these hulking colossi looming over the trees crashing through the wilderness to grab at the screaming, fleeing villagers, yet there was apparently little they could do in retaliation. And so the giants stayed, building gigantic houses, hunting, fishing, and marauding through villages whenever they liked. The story takes a turn into more mythical sounding weirdness when it was claimed that they were finally driven away by a bright, shining angel in the sky, but De Leon believed that the stories were real, as he saw these wells and houses for himself and could not fathom how any normal sized men could fashion them, and even claimed that remains of the brutes had been found by other conquistadors. He writes:

This is the account they give of the giants, and we believe that it happened, for it is said that very large bones have been found and still are found thereabouts and I have heard Spaniards say they have seen pieces of teeth which they thought must have weighed half a pound when whole, and who had also seen a piece of a shin-bone of wonderful size, all of which bears witness to the truth of the incident. In addition to this one can see the places where the sites of their villages were, and also the wells or cisterns they made. I cannot state whence or how these giants came there.

In the present year of 1550 when in the city of Lima, I heard that when his excellency Don Antonio de Mendoza was viceroy and governor of New Spain, certain bones of men as big as these giants, and even bigger, were found there. I have heard too that in an ancient sepulcher in the city of Mexico or somewhere else in that kingdom certain bones of giants have been found. Since so many people saw them and attest having done so, it can therefore be credited that such giants did exist and indeed they may all have been of the same race.

This fits in with other findings of the era, such as when in 1543 a Captain Juan Olmos supposedly conducted an excavation in the Trujillo valley and supposedly found various bones from extremely large individuals who would have stood 10 feet tall or more. There was also a giant’s skeleton found in the province of Tucumán and Tarija by Agustín de Zárate and his men, and there were frequent reports throughout the 16th century of these explorers coming across the graves of giants. This continued into the 17th century, and an intriguing account comes from Jesuit priest and missionary Pablo José Arriaga, who wrote of a curious finding in his 1620 manuscript The Extirpation of Idolatry in Peru, in which he says:

They took us to the other side of the village, about a quarter of a league, where a very large cave was, and in it many dead gentiles, and among them were three bodies of giants with deformed heads [elongated skulls] dressed in cumbi [ceremonial cloth], but rotted with time. These [giants] are the progenitors of all this people, whom they worshipped and revered; there were many traces of [human] sacrifices; they [the Official Inspectors] burned the bodies in the village. 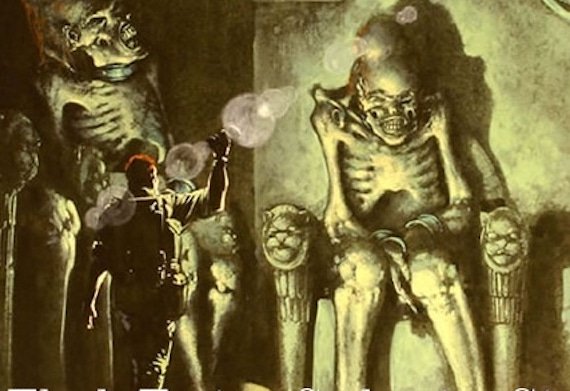 Such findings are not solely confined to the mists of time and lost history, but have continued up into more modern times. One of most well-known of these is a finding supposedly made in 1928, according to author and researcher Brian Foerster. that in 1928 there were found bizarre elongated “alien” skulls and another mummified humanoid body in the desert of Paracas, on the southern coast of Peru and estimated as being up to 3,000 years old. The specimens were supposedly found by archaeologist Julio Tello, after which they were stored away for years before being coming to the attention of Foerster, who had DNA tests carried out on them and describes the amazing find as follows:

We were recently shown, and examined the above artefact that supposedly was found, along with many others, in a cave in the southern desert of Peru; exact location to be given, hopefully, in the future. The head appears to be made of bone with skin over the top. It has two eyes, but eyes it is nothing like a human, it is more amphibian or reptilian. The mouth seems to be so tiny that it does not even appear to be for feeding. It is a very mysterious thing and I can’t imagine how those two specimens could be fake.

Whatever the sample labeled 3A has came from – it had mtDNA with mutations unknown in any human, primate or animal known so far. The data is very sketchy though and a LOT of sequencing still needs to be done to recover the complete mtDNA sequence. But a few fragments I was able to sequence from this sample 3A indicate that if these mutations will hold we are dealing with a new human-like creature, very distant from Homo sapiens, Neanderthals and Denisovans.

Foerster claimed that these DNA tests on the remains conclusively showed that they are not human, but other than that no evidence of these tests or word on who performed them has been forthcoming. The so-called “Paracas Skulls” have gone on to be debated and held up as real evidence of giants, aliens, or the Biblical Nephilim ever since. In this case, scientists have come to the conclusion that these skulls are the result of intentional cranial deformation or modification carried out by the ancient native peoples of the region, but of course there are those that still believe these are not human and that Foerster’s own DNA tests were real. Much suspicion has been cast on his claims, as most of this information was released on social media, lacked any outside verification, and have been accused of being a way to promote his books, videos, and tours. It is unknown just how much the Paracas skulls constitute evidence of giants, aliens, or both, but they remain much discussed. Author and researcher April Holloway has stood against the idea that this resulted from skull deformation, writing:

The cranial volume is up to 25 percent larger and 60 percent heavier than conventional human skulls, meaning they could not have been intentionally deformed through head binding/flattening. They also contain only one parietal plate, rather than two. The fact that the skulls’ features are not the result of cranial deformation means that the cause of the elongation is a mystery, and has been for decades.

Are the Paracas skulls the real deal? Who knows? Even more recent is a finding apparently made in 2013 in the Amazon region between Ecuador and Peru, and investigated by British anthropologist Russell Dement. It is claimed that they found massive skeletons measuring up to 3 meters (9 feet 10 inches) and thought to date back to between 1400 and 1500 AD. Dement claims that he travelled to the region where the remains were found and recovered a rib cage and skull, which he says he will have analyzed. In the meantime, the publication Cuenca Highlife has said of the remains:

Did Peru ever have such giants inhabiting the wilds here? It is hard to say. All of the supposed evidence is anecdotal and not easily concretely verified, making the answers murky to say the least. If these creatures ever did exist here, then how can we explain them within the framing of our current understanding of evolution and the natural world, and where did they come from? Were these even creatures from this world at all, or perhaps something more alien in nature? There is no way to really know, and cases like this remain mere historical oddities and mysteries that may very well remain evasive for some time to come.

UFO Seen Multiple Times Over Australian Coal Mine — Is it Coal-Powered?