Sometimes haunted places are not what you might envision them to be. Other than decrepit old houses ans dark forests, sometimes supernatural forces seem to be drawn to places that are anything but. There are bright, happy places in the world that also seem to be pervaded by these powers from beyond out understanding, and one such place can be found in the tropical island paradise playland of Bali, where a luxurious resort sits abandoned looking out over its domain to invite tales of the truly bizarre.

Lying out in the westernmost of the Lesser Sunda Islands of Indonesia is the island of Bali. Known for its pristine beaches and sun soaked island paradise postcard perfect good looks, as well as its expansive coral reefs and incredible biodiversity, it is no wonder that this place has gained a reputation as being Indonesia’s number one tourist destination, and indeed tourism makes up the vast majority of Bali’s economy. Here tourist resorts have sprung up like weeds, seeking to cater to the droves of fun seekers who come here to frolic in this tropical paradise, swim or scuba dive in its azure waters, enjoy the island’s famous traditional arts or its majestic scenery, or just sit back and relax while watching the sunset. Many of these resorts have gone on to become extremely popular and successful, yet among these there are others that have gone along a different path, and one of these is an abandoned hotel resort towards which stories of ghosts, demons, and other strangeness have gravitated towards for decades. 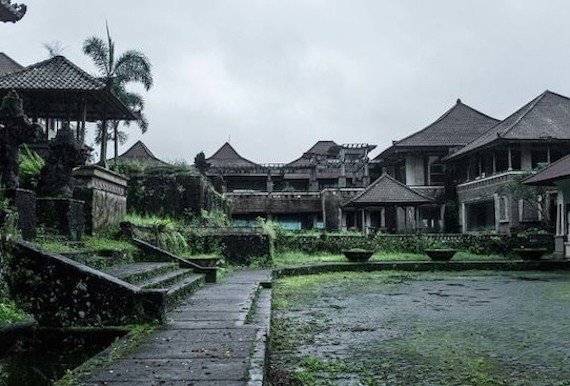 What is officially known as the Bedugul Taman Rekreasi Hotel & Resort was first constructed in the 1990s in the northern lakes region of Bali, perched upon a picturesque mountain ridge not far from the party mecca known as Kuta and envisioned as an opulent luxury resort like no other in the area. No expense was spared in its construction, and it would have been quite the posh place to stay if it had ever opened its doors at all. Although the upscale resort was mostly finished, its downfall would lie in the fact that it was bankrolled and conceived of by Tommy Suharto, who some of you might recognize as the son of the president of Indonesia at the time and who was neck deep in all manner of scandals and tales of corruption, most notably the time he had a judge who had convicted him of a massive land scam killed. It was a crime that would get him found guilty in 2002 and send him to prison, where he languished away at a luxury retreat doing hard time lounging about spending leisurely afternoons drinking mai tais to a beach view. Nepotism at its finest.

Unfortunately, this all spelled the doom for the would be resort, and it was never officially opened to the public in any known capacity. Its mostly furnished rooms, marble floors, and elegant facade began to be slowly degrade and be devoured by the encroaching jungle, the vines creeping over it, weeds choking it, becoming a feral overgrown shadow version of what it had been envisioned to be. Yet it was never torn down either, and so it remained perched upon that mountainside in the highlands, inscrutably watching over its realm and slowly accruing scary stories. With this abandoned resort it is hard to know where the truth ends and urban legends begins, difficult to unravel fact from fiction. 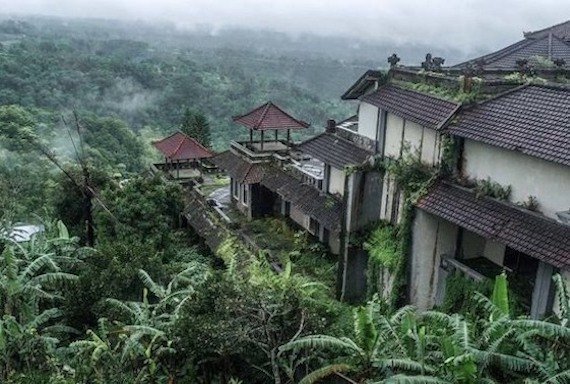 One story has it that the hotel indeed did open to guests, but that one evening everyone just disappeared without a trace, after which it quietly closed its doors. Another is that it is prowled by the spirits of construction workers that died during its construction, their deaths covered up to leave them in a limbo of wandering these halls forevermore. Other stories still say that a demonic presence has taken up residence here, and that it will chase off anyone who dares encroach on its territory. This has not at all stopped urban explorers from descending upon the “Ghost Palace Hotel,” and one can find myriad videos of people snooping around here. Although the entrance to the abandoned resort is guarded and it is technically off limits to the public, it is apparently pretty easy to either sneak in or bribe the security to gain access. One urban explorer at Mumpack Travel wrote of the surreal place:

It’s said that the hotel is haunted by the ghosts of workers who died there during its construction. While I’m not a big believer of hauntings to be perfectly honest there were a few rooms there where I felt a thud in my heart and my hair stood on end and I got out of those rooms quick smart. It was very odd. There is certainly a presence there and the atmosphere is a little spooky – but of course it’s a deserted resort, it’s going to be – and that’s also part of the appeal. Walking around inside the Bali ghost hotel is awesome! It’s kind of spooky, and it’s so huge, quiet and fascinating. I wish we had stayed longer and explored every room. But we loved what we found while we snooped around.

There are lots of rooms here – some surprisingly are really small while others are huge with living areas and large private balconies. Some rooms have the electronic key swipes installed, and all have tiled bathrooms with bath (I couldn’t see any holes in the tiles for shower attachments?) and toilet , some have walk in robes. Most have spectacular views. The lower floors are all caked in mud from the rain, and there is a lot of mould but it’s all in surprisingly good condition. There’s no evidence of squatters so security obviously does a good job keeping people out.

The hotel has also become a little-known destination for the burgeoning trend of “ghost tourism,” wherein people travel to place out of macabre curiosity and the chance of having their own paranormal encounters. What is going on with this place? Is there anything to all of this talk of the paranormal or is this just another of the many forgotten, abandoned places of this world that have drawn to themselves stories of the paranormal? There is no where to really know, except to go check it out for yourself.