The Strange Case of the Tehran UFO Dogfight

UFO encounters happen all over the world, to people from all walks of life. It is an all-encompassing phenomenon that includes a wide range of different reports that run the range from the slightly odd to the downright insane. Some of the most exciting and intriguing of these are those encounters that have occurred between aircraft pilots and something seemingly not of this world, and one of the best known and most mysterious cases of this is the time Iranian fighter jets engaged something very weird and seemingly aggressive in their skies.

It all began with a series of strange phone calls. On September 19, 1976, at approximately 11:30 PM, the Imperial Iranian Air Force command post at Tehran, Iran, began receiving panicked calls from concerned citizens in the Shemiran city district, who claimed to be witnessing unusual bright lights moving about in the sky. The Iranian Air Force at first assumed this to be conventional aircraft or helicopters, but it was soon found that there was nothing scheduled to be in the sky at that time that could be creating the phenomena, and so assistant deputy commander of operations General Yousefi personally contacted the control tower at Mehrabad International Airport and then looked out over the landscape to see with his own eyes a very bright object like a star travelling across the sky, only far too large and bright to be a regular aircraft or star.

In the meantime, more calls were coming in from frightened citizens, and the commander felt it would be prudent to investigate the disturbance further. To this effect he authorized an F-4 Phantom II jet to be scrambled at Shahrokhi Air Force Base in Hamadan and sent to go take a look and possibly intercept. As the jet approached it began to experience various technical malfunction and glitches, with the instrument panel falling to work properly and communications ripped through with heavy static, which all got bad enough that the pilot was forced to abort and head back towards base. Oddly, the plane supposedly began to function normally as soon as he left the area, suggesting that perhaps the unearthly object had been responsible. Undeterred, the Iranian Air Force sent up another F-4, which was able to get a radar signature for the mystery object, which they estimated was similar to that of a passenger jet, although the blinding nature of the light it emitted prevented an accurate judgement of size. Whatever it was then reportedly shot away from the approaching fighter with a sudden, breathtaking burst of speed and acceleration, and the chase was on.

The fighter was able to pace the fleeing UFO but not gain on it, yet the crew, composed of a Lieutenant Parviz Jafari and Lieutenant Jalal Damirian, was able to make some observations. Other than the immense, nearly blinding brightness of the object, it was also noticed that it had an array of rectangular lights upon it that alternated between red, blue, green, and orange in some inscrutable rapid pattern. As they stared in awe and tried to catch up to it, the mysterious unidentified aircraft reportedly at several points ejected into the air a total of four smaller objects, one of which headed right for its pursuers, causing the alarmed pilot to try to lock onto it with a missile, but he would later report that the targeting system suddenly went haywire and all communications with base were cut off. This aggressive smaller object showed no signs of slowing down, inexorably approaching at very high speed, and thinking that this was perhaps a missile of the unidentified object’s own, the fighter took emergency evasive maneuvers. According to the crew, they took a deep dive, and the smaller object followed their movement to chase them some distance before turning around to join its larger brethren. The large UFO then shot off at mind-boggling speed and the jet’s instruments went back online. On their way back to base they apparently would see another smaller object, which apparently descended to the desert below. The pilot Jafari would later say of these objects in a press conference:

Four other objects with different shapes separated from the main one, at different times during this close encounter. Whenever they were close to me, my weapons were jammed and my radio communications were garbled. One of the objects headed toward me. I thought it was a missile. I tried to launch a heat seeking missile to it, but my missile panel went out. Another followed me when I was descending on the way back. One of the separated objects landed in an open area radiating a high bright light, in which the sands on the ground were visible. We could hear emergency squash all the way, which was reported by other airliners flying at the time and continued for another couple of days.

It would indeed later turn out that a passenger airliner had also had their equipment disrupted, and additionally the large object had also apparently been visually observed by air traffic control on the ground. Rather eerily, air traffic control claimed that as the F-4 made its approach to land they observed another object or craft, this one cylindrical and with a light on each end and a flashing light in its center, appear and follow the fighter back towards base. This second object would then apparently pass dangerously close over the fighter and do a fly by over the base, causing the control tower to lose all power as it did, only for everything to return to normal when it was gone. It would then reportedly be seen again some time later by a pilot over the Mediterranean, as well as by the crew and passengers of a passenger airliner over Lisbon, Portugal, and also over Morocco. An Iranian air traffic control officer at the time would later say of the incident:

When they heard our report and the report of the pilots, they concluded that no country is capable of such technology, and all of them believed it was a strange object from outer space. 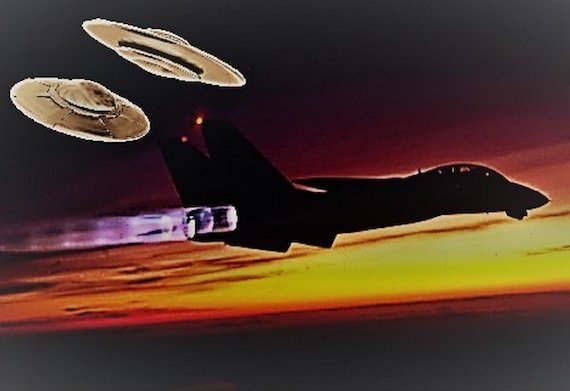 Another odd little detail is that when the area where the “probe” was claimed to have been dropped was investigated, locals claimed that they had heard a loud noise and seen a bright light on the evening in question, although no physical evidence was apparently found. The whole strange incident would be investigated by not only the Iranian authorities, but also the U.S. Military Assistance Advisory Group in Tehran, the U.S. Air Force, and U.S. Defense Intelligence Agency (DIA), and there have been many attempts to try and explain it all over the years. There have been many conventional explanations offered, such as that what was seen was a rocket, meteor, or the re-entry of a decaying satellite, or that this was a misidentified astronomical body such as Venus or Jupiter, but none of these really seem to fit all of the odd features of the case. These objects were witnessed by numerous experienced, qualified personnel such as pilots, military officers, and air traffic control workers, which makes it unlikely they would make such an observational mistake. There is also the detail that something was jamming equipment aboard the jets, which is hard to explain away and has left authorities and researchers of the case puzzled. It has been suggested that this could have been the result of pilot error and faulty, under-maintained equipment, but there is also the report that an air control tower was temporarily disabled as well.

Was this all explainable with mundane explanations? Is it all a perfect brew of witness error and malfunctioning equipment? Or was this something more bizarre? The Tehran UFO incident has become a very exciting case for several reasons. The object was seen by multiple witnesses, ranging from residents to military personnel and pilots, many of whom are highly reliable observers and all of whom describe the same thing within the same time frame. There is also the strange anomaly that at least three separate aircraft experienced technical malfunctions and equipment jamming similar to electromagnetic effects during the event. Finally, it was very well investigated, with no official explanation ever offered. Whatever is going on here has remained very much discussed in UFO circles, and it remains a true unexplained case for the files, perhaps doomed to remain locked in a limbo of debate and speculation for a very long time.