The Strange Mystery of the Lubbock Lights

It was a calm evening at around 9:20 PM on August 25, 1951, and some professors from the Texas Technological College, now Texas Tech University, were sitting around chatting in the backyard of geology professor Dr. W.I. Robinson’s home in Lubbock, Texas. Joining him were chemical engineering professor Dr. A. G. Oberg, physics professor Dr. George and Dr. W. L. Ducker, who was head of the petroleum-engineering department. As they sat around drinking tea and discussing various scientific subjects, something caught their attention in the sky above, and when they looked up it would begin one of the most famous and well-publicized UFO flaps in United States history.

What those professors saw up there crossing the darkened sky was a V-shaped formation of approximately 20-30 bright blueish-green lights like large stars, which were perfectly circular and quickly passed overhead to be then followed by yet another similar formation moments later. The professors, all esteemed and respected professionals, could not figure out what they had just seen, ruling out conventional aircraft and meteorites, and they excitedly discussed it amongst themselves before going to the Lubbock Avalanche-Journal with their strange sighting. It made a lot of waves at the time, simply because these were trained scientists and considered to be very reliable witnesses, of which lead investigator on Project Bluebook, U.S. Air Force Captain Edward J. Ruppelt would later say, “If a group had been hand-picked to observe a UFO, we couldn’t have picked a more technically qualified group of people.” Making it even more intriguing still was that they were apparently not the only people who had seen something outlandish in the sky that evening. 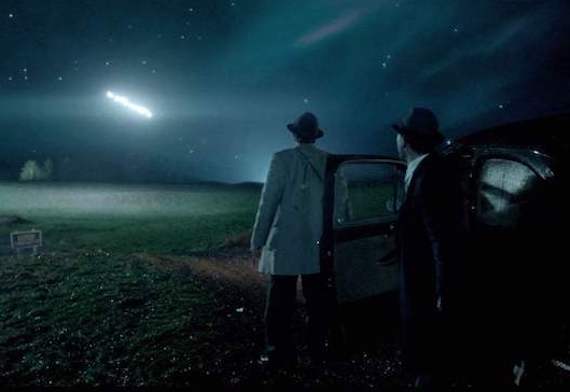 There would soon come a report from Albuquerque, New Mexico, which is located about 350 miles away from Lubbock, that supposedly occurred at dusk on that same evening. In this case, a high ranking employee at the highly secretive the Atomic Energy Commission’s Sandia Corporation had been sitting outside with his wife when they a massive, airplane-like object with an array of weird bluish lights along its wings cruise through the sky above. Almost immediately after this there had been a sighting made by a rancher who said he saw a similar V-shaped formation of lights that looked like “an airplane without a body.” Three women in Lubbock would also report having seen the same exact thing at around the same exact time as the professors’ sighting and there would be yet another sighting report from a Dr. Carl Hemminger, a professor of German at Texas Tech.

In the meantime, the professors who had made the original report launched an investigation of their own into the lights over the coming weeks, finding that over a dozen other people had seen them, and indeed they would make 12 more additional sightings of the strange lights themselves. These reports were meticulously detailed, mentioning altitude, direction of movement, wind speed, and angle of travel, and it was all enough to get the attention of Captain Edward J. Ruppelt with the Air Force, and by the time he got involved there had been hundreds of sightings of the lights in the region, with every witness describing the same thing. It was all over the news and captured the imagination of people all over the country, especially those in Lubbock.

One of these curious locals was a Texas Tech freshman named Carl Hart, Jr, who had taken to keeping a lookout through his window in the hopes of seeing the phenomenon for himself. On August 31 he finally got what he wanted, when formations of the lights passed near his house a total of three times. Hart had been keeping vigil with his camera at the ready, and was able to snap a series of photographs of the lights, which would become the public face of what were now being called “The Lubbock Lights.” The pictures received heavy circulation in newspapers and major publications such as Life Magazine, further propelling the mystery of the strange UFO phenomena gripping Texas at the time. The Hart photographs themselves would be analyzed numerous times over the years, and have proven to be frustratingly inconclusive and hotly debated to this day.

Considering the nationwide sensation the Lubbock Lights were becoming, there were a lot of theories as to what they could be. Aircraft, weather balloons, birds reflecting street lights, the ever popular Venus, top secret experimental aircraft, satellites, meteorites, you name it and it was probably proposed at one point or another, yet nothing seems to really completely fit, and the witnesses continue to deny any of those explanations. Captain Edward J. Ruppelt himself would give a rather cryptic summation on what he thought of the lights, saying:

I thought that the professors’ lights might have been some kind of birds reflecting the light from mercury-vapor street lights, but I was wrong. They weren’t birds, they weren’t refracted light, but they weren’t spaceships. The lights that the professors saw…have been positively identified as a very commonplace and easily explainable natural phenomenon…I can’t divulge exactly the way the answer was found because it is an interesting story of how a scientist set up complete instrumentation to track down the lights. Telling the story would lead to his identity and, in exchange for his story, I promised the man complete anonymity... With the most important phase of the Lubbock Lights “solved”—the sightings by the professors—the other phases become only good UFO reports.

Curiously, it remains unknown just what he means by “solved,” or what exact the “answer” really was, and neither Ruppelt nor his Air Force handlers have ever divulged anything more on the matter, leaving it maddeningly ambiguous and murky. The strange case of Lubbock Lights has in the meantime remained unsolved, with little progress in ascertaining just what was going on here. Was this some atmospheric phenomena, experiments with aircraft or rockets, birds, meteorites, or what? What makes this case very perplexing is the sheer amount of very qualified individuals who saw it, and who still stand by the idea that this was something from beyond their conventional understanding. Whatever the Lubbock Lights were, they have gone on to become a much-discussed and puzzling mass UFO sighting that will probably make the rounds for some time to come.

Special thanks to Steve Baxter for the cover artwork.

Original Board Game of Death Discovered in Egypt