The Strange Mystery of the Warminster Thing

Tucked away among rolling hills in the quaint countryside of western Wiltshire, England, about two hours west of London, is the sleepy, historical town of Warminster. It is a typical quiet rural and rustic English town, with charming little streets and not much typically going on, but starting from the 1960s this would become ground zero for a series of intense UFO phenomena and high strangeness that has never fully been explained and which remains a bizarre mystery talked about to this day.

While various UFO phenomena had already been reported from the area for years, it would all begin in earnest in 1961, when there was a report by four witnesses who claimed to have observed a cigar shaped object fly across the sky leaving a trail of sparks in its wake, and there would be a steady stream of reports over the ensuing years of similar phenomena in the sky, but things would really begin to get strange towards the end of 1964. On Christmas day of that year, residents were alarmed at a cacophony of strange, eerie noises that took different forms depending on the witnesses but which were rather frightening in every case. Some reported a loud booming noise, while others complained of sounds that sounded like twigs or branches being dragged across their roofs or of something pounding on the top of their homes. One local named Mildred Head would say of her own experience, “Our ceiling came alive with strange sounds that lashed our roof… as if twigs were brushing the tiles… ended up with a noise [like] giant hailstones.” Some cases were rather dramatic, such as that of local woman Marjorie Bye, who heard booming noises on her way to church that were so intense she felt paralyzed and complete helpless. At least 30 people would hear these eerie aural phenomena and there was no discernible cause for any of it.

The strangeness would continue on into the new year, with a glowing cigar-shaped object seen by at least 17 residents on June 3, 1965, and on August 10 a local woman known as Mrs. Atwell would claim to have seen a bright object like a “brilliant star” travelling across the sky after being woken by a deafening droning noise. On August 17, 1965 there was a frightening incident when a thunderous boom echoed out across the country side, described as sounding like a massive bomb going off, after which scared locals saw in the sky “a monstrous orange flame in the sky, crackling and hissing.” At the time there were other reports of sporadic booming noises, with some rumors saying that at times the shockwaves of these were so potent that they had actually killed off flocks of pigeons or other birds, causing them to simply drop dead from the air to flutter down lifeless, and in some cases even human beings had suffered negative physical symptoms or had even been knocked down by the blasts. Some people were also claiming that their cars had stopped operating in the presence of the phenomenon, or that it had damaged buildings, and it was all very dramatic.

The frightened residents would actually call a town meeting on August 27, 1965, to discuss what to do about all of this oddness, and the town hall would be packed with hundreds of spooked locals and town officials. Here the panic and fear would be fanned by a man named David Halton, who verified that pigeons were mysteriously dying and also claimed that rats had been turning up mutilated without any explanation. It was at this meeting that we make the acquaintance of local news reporter and editor for Warminster Journal Arthur Shuttlewood, who would become instrumental to really launching the phenomena, now being called “The Warminster Thing,” into the public consciousness at large. He would claim to have gathered reports from dozens of people who had heard the noises or seen strange things in the sky since the early 1960s, and as soon as his articles began hitting the papers there would be a deluge of new reports as people wrote or called in with their own stories. Within the coming year alone there would eventually be around 1,000 reports gathered of all manner of UFO activity in the skies of Warminster, and most of these were compiled and kept in a dossier by Shuttlewood himself.

Through all of this there was even a photo of one of the UFOs offered up to Shuttlewood by a man named Gordon Faulkner, after which it gained wide publicity when it was printed in an issue of The Daily Mirror in September of 1965, and this would truly catapult the local phenomena to worldwide attention. Unfortunately, Shuttlewood would become quite obsessed with it all and not a little unhinged as the months went by. He began giving increasingly bizarre, possibly embellished accounts of the phenomena, and he really derailed into the realm of bizarre when he made the claim that he had actually been contacted and subsequently met up with the aliens responsible. 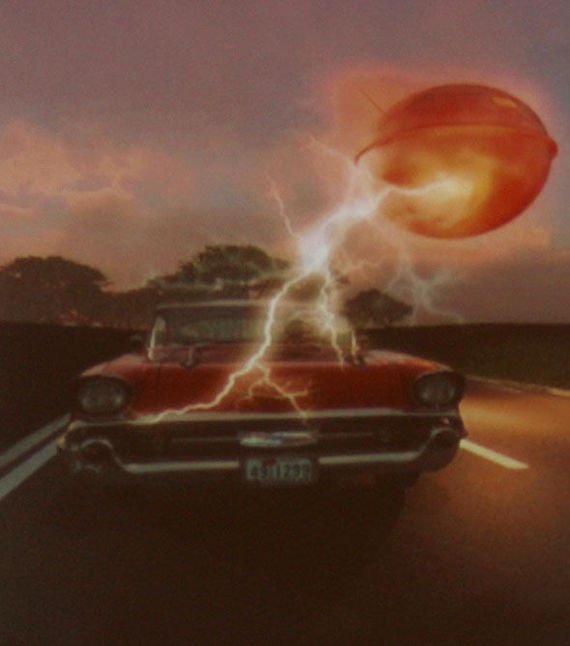 The whole weird affair apparently began on September 25, 1965, when Shuttlewood claimed that he had received a call from an individual calling himself “Karne,” and who claimed to be an alien from the planet Aestsa. Shuttlewood then apparently told the individual to prove it, and almost at that very instant there was a knock at the door. Shuttlewood claimed that the person at the door was Karne, and that he had blotchy skin and unnerving eyes without pupils. The two had then allegedly had a chat, during which Karne warned of an impending catastrophic war and warned that humankind was on the fast track to doom. The conversation would apparently come to an end when Karne, who was having an increasingly tough time breathing and had been fidgety from the start, looked at a gold device on his wrist, excused himself, and then left to never be seen again. Oddly there would be other reports of mysterious figures in the area at the time, including a hodgepodge of faceless humanoids, very tall humanoids dressed in white, strangers wearing balaclavas, helmeted figures, and a grey-clad figure with “streaming fair hair,” making it all even weirder still.

In the meantime, many curiosity seekers and UFOlogists had flocked to the region and were engaging in “sky watches,” mostly concentrated on Cradle Hill, Starr Hill and Cley Hill, where most of the sightings had occurred, and through it all Arthur Shuttlewood was still reporting and spinning tales. By all accounts he had devoted his life to the phenomena, and was the one largely responsible for keeping the hysteria going. He would go on to write two books on the Warminster Thing, and he would also insist that he had met the aliens on several other occasions, making it unclear if he was honestly reporting all of this stuff or had gone off the deep end, how much of his reporting was based on actual sightings and how much he made up. Whatever one may think, Shuttlewood would stand by his stories and insist it was all true right up until his death in 1996.

The Warminster UFO flap would remain strong right up into the 1970s, during which time the town added crop circles to its long list of oddities, after which it seems to have died down, although there have been sporadic UFO sightings right up into the present. Although it has faded with time and slipped somewhat into obscurity, the whole Warminster Thing affair is still remembered locally and by UFOlogists. In 2015 there was a conference held in Warminster to mark the 50-year anniversary of the original sightings, during which several prominent researchers were in attendance, and later that same year a wall coated with murals was erected to commemorate the incident. To this day the name Warminster has been closely linked to UFOs, with the region still considered to be one of England’s premiere hotspots for UFO sightings.

What happened in this quiet rural town and why did it attract so much activity? There have been lots of ideas, the most popular of which is that this all had something to do with the nearby military base on Salisbury Plain, although why an Army barracks would have anything to do with unexplainable aerial activity or the testing of experimental aircraft is anyone’s guess. Other ideas include that it all has something to do with Stonehenge, or of course that this was really aliens, drawn here because of the base or for any number of inscrutable reasons we may never understand and are perhaps not meant to. It is unclear what could have been going on here, or how credible Shuttlewood or any of the other witnesses ever were. Was this the doing of aliens, military experiments, or simply the product of panic and mass hysteria? There is no way to know, and the area of Warminster remains a place steeped in mystery and with a reputation of having one of the most intense UFO flaps England has ever seen.