The Wizard of New York’s Subways

The subways of New York City, in the United States, are famous for their crowds of people and for the eclectic mix of personalities one can find there. Here a colorful cast of characters roams at all hours, and while most people might choose to block it all out and just focus on what they need to do that day, zoning out into their own isolated world, there are some people that seem to stand out to the point where their presence is rather undeniable. One of these must certainly be a literal wizard who roams the subways of New York casting spells and granting wishes.

Devin Person is not the weirdo or derelict many may at first take him to be. He was once just a regular working person like everyone else, with a day job as an associate product manager at the website creator Squarespace and no personal problems with his life other than being perhaps slightly off kilter. The only thing that some might have ever considered odd about him was his deep interest in the paranormal, the occult, and New Age practices, subjects about which he would read extensively, and it is this interest that would launch the next chapter of his life. In 2014, Person had a sort of spiritual awakening, of which he has said was like “reaching out through time and space and across the dimensional barrier to make contact with the most wizardly possibility of myself,” and he decided that he was going to reinvent himself and do something good with his mystical knowledge for society, and thus was a modern day wizard born.

The 32-year-old Person began by starting a small spiritual and occult consulting group, mostly made up of friends and family at first, but which would soon expand to dozens of people who would pay to have Person lead them in rituals, spiritual cleansing, hypnosis and meditation sessions, tarot card readings, and chat sessions, all in a very informal, friendly atmosphere that people who have been involved say are very comfortable and welcoming and which he says “combine psychology-based mysticism with practical goal-setting.” Person certainly did his best to look the part as well, wearing long flowing wizard robes, a pointed hat, and looking very much like someone who has stepped off the set of a Harry Potter movie, as well as an eclectic mix of other flowing capes, kimonos, or jackets that he himself calls “wizard casual” or "urban Jedi." The icing on the cake is his shocking white hair and beard, which is actually not intentional but rather a side effect of medication he was taking for villonodular synovitis, a condition that causes debilitating inflammation of his knee. Person has said of his new mission in life on an interview with Jim Perry of the podcast Euphomet:

It’s a very fun word and archetype to occupy, because if I say ‘wizard’ people have an image in their mind, like a guy with a beard and a pointed hat and magic and there’s this whole thing, and yet theres a bunch of questions – ‘what is a wizard in the modern world? What do you do? How does that work?’  – their curiosity kicks in. That’s, in a sense, a magic spell. I can say this one word and I cause an internal experience in you and an emotional experience that’s largely associated with curiosity and wonder, and will be a very different experience than if I said ‘lawyer’.

Besides his consultation services, Person also took to wandering through the city’s extensive subways, looking to make an impact on someone’s life in a positive way. To this end he will offer to cast spells for people or even grant them “wishes,” which run the range of making more money or getting a new job, to a healthy life or finding happiness or love. He walks through the trains holding a sign that reads “Talk to the Wizard- because no one meets a wizard by accident,” and he raises more than his share of eyebrows, but usually smiles as well. He doesn’t ask for any money during these subway excursions, and rather seems to be genuinely interested in bringing some magic into the grind of people’s mundane, humdrum daily lives. He said of this mission to the New York Post:

I try to think, ‘What would a wizard do in the modern era?’ Wizards are people helpers. They are who the hero encounters on their journey, and they’re able to give the hero a bit of advice, maybe a magical artifact, some sort of assistance that helps the hero get over their obstacle and on their journey. This is the moment in your life where you encounter a wizard, and this has the potential to change a lot and we’re going to talk about it. I’m weird, but I get results. 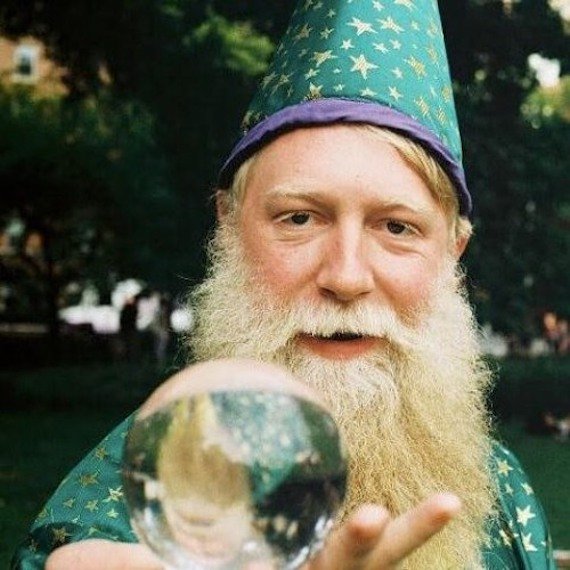 He admits that not all of these spells and wishes are real magic in the strictest sense of the word, but they are magical in their own way nevertheless, saying “ What I’m offering is a moment to . . . think about things differently. Maybe [the person will] take an action that they wouldn’t have otherwise. There is a difference between a wish and a miracle.” This has all made him rather somewhat of a celebrity on New York’s subways, where he is called the “Subway Wizard of New York,” and Person seems to love the attention, although he does have his share of skeptical detractors, of which he has said on Euphomet:

I think part of the joy of being a wizard is coloring outside the box. I meet certain types of people who are very interested in finding a box to contain ‘wizard’ in. They either want to disprove that I’m a wizard, that that’s not possible, or more commonly, they want to take a box that they’re already familiar with and use that to contain me.

Whether you believe in his powers or not, Person has more than made a name for himself in this bustling city, where faces flow by unremembered and where magic is in short supply. Here is one of those free spirits who has gone out into the world to try and create the mysticism we lost a long time ago in our busy lives, and by most accounts he seems to be doing a pretty good job at it. It certainly seems that, regardless of whether real, literal magic exists in this world or not, we could perhaps use more people like Devin Person. At least it would make a good selfie.

Dean Koontz Predicted Wuhan Virus in 1981 Thriller – or Did He?