When Close Encounters Get Really Weird

Orfeo Angelucci was a somewhat meek, fragile character who was blighted by ill-health and low-esteem from childhood. That is, until he had a series of life-changing UFO encounters that energized him and gave him a new lease on life. It’s fair to say that Angelucci was someone who very much rode on the coattails of the likes of the Contactees Georges one, two and three: that’s Adamski, Van Tassel, and Hunt Williamson. Angelucci never reached the stratospheric heights of Adamski. He was, though, one of the key players in the Contactee arena of the 1950s.    In April 1952, Angelucci secured a good job with the Lockheed Aircraft Corporation in Burbank, California, specifically in the Plastics Unit. On May 23, 1952 Angelucci was working the late-shift at Lockheed. It wasn’t long after midnight when he finally hit the road, looking forward to seeing his wife. All was normal. That is, until it wasn’t.

While he drove along Los Angeles’ Victory Boulevard things became strange; very strange. Out of the corner of his eye, Angelucci saw a bright red light; it was moving low in the dark skies. Puzzled, he slowed down his car and kept his eye on the whatever-it-was. It didn’t appear to be a solid, nuts-and-bolts aircraft of some sort. Rather, it was a ball of light, around five times the size of an average traffic light. Somewhat disturbingly, and as Angelucci continued his drive, the light appeared to be shadowing him. Feeling nervous, he decided to keep driving and hoped that the light would vanish. It did not. Shortly after crossing a bridge over the Los Angeles River, and at an intersection which Angelucci described as a “lonely, deserted stretch of road called Forest Lawn Drive,” a pair of small lights – maybe around two feet in diameter – shot out of the larger light, which soared into the dark skies. Angelucci brought his car to the proverbial screeching halt. He could only sit and stare as the pair of lights bobbed in the air, like floating beach-balls. Suddenly, there was a development; an astounding one. 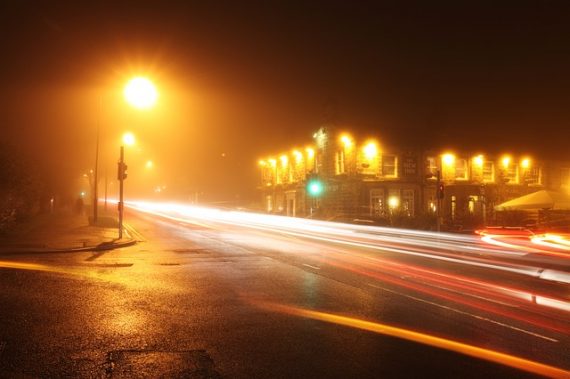 As Angelucci looked on, a voice emanated from one of the balls of light. According to the man himself, it was “a masculine voice in strong, well-modulated tones and speaking perfect English.” The voice assured Angelucci that he should not afraid; no harm would come to him. Stressing to Angelucci that he was in the company of friends, the voice said, in a typical, know-it-all Space Brother fashion: “Man believes himself civilized, but often his thoughts are barbaric and his emotions lethal. We do not say this as criticism, but state it only as fact. Thus it is best to approach all planetary visitors with friendly, welcoming thoughts.” The lights shot away, leaving Angelucci amazed and excited. Two months later, he would have yet another encounter.

It was the night of July 23, 1952 and Angelucci felt compelled to head out to the Glendale Hyperion Bridge, which crosses the Los Angeles River and Interstate 5. He did so on foot. In his own words, “dense, oblique shadows down below” transformed things into “a shadowed no-man’s land.” His breathing became shallow, his hands and legs tingled, and a rising panic-attack threatened to overwhelm him. Then, suddenly, a “huge, misty soap bubble squatting on the ground, emitting a fuzzy, pale glow” appeared before him. That soap bubble-type light suddenly transformed into what appeared to be a solid, metallic craft. Angelucci moved slowly towards it; entering the object through a small doorway and into a darkened room. It contained nothing but a chair. On sitting down, Angelucci soon felt unable to move; his body was suddenly weak and heavy. It was, he claimed, all due to the effects of G-forces: the craft was apparently high in the sky in no time at all. Peering out of a conveniently positioned window, Angelucci could see the bright lights of Los Angeles glowing far below him. The lights got fainter and fainter as the craft got progressively higher and higher: “I trembled as I realized I was actually looking upon a planet from somewhere out in space.”

A booming voice suddenly filled the room: “Orfeo, you are looking upon Earth – your home! From here, over a thousand miles away, in space, it appears as the most beautiful planet in the heavens and a haven of peace and tranquility. But you and your Earthly brothers know the true conditions there.” He was warned that an “hour of crisis” was looming; that the human race was in a state of major uncertainty that just might lead to a disastrous atomic war between East and West. Instantly, and as the Lord’s Prayer boomed out of unseen speakers, Angelucci knew he had to do the bidding of the invisible entities on-board the spaceship: spread the word of friendly aliens from a faraway world. In minutes, he was returned to the shadow-filled bridge and left to make his way home. Angelucci’s life – which was to be filled with further encounters of the peace and love type - would never be quite the same again.

Like so many of the Contactees, Angelucci was soon on the lecture circuit, which included becoming a regular at George Van Tassel’s gigs out at Giant Rock, California. Angelucci also turned his attention to writing books; his most remembered one being 1955’s The Secret of the Saucers. He died in California on July 24, 1993 at the age of eighty-one.