Explorers have always sought to go past that next hill, that next horizon in their efforts to tame our planet and push out further past the boundaries of what we know. It is almost a given that they are going to come across the strange and the unusual along the way, and this has most certainly been shown again and again, and sometimes this lodges firmly into the world of the paranormal. One such case of an explorer coming across possible paranormal forces is a venerable mountaineer and explorer who had some very strange experiences up in the clouds that remain unexplained.

The whole odd tale revolves around the English mountaineer author, photographer and botanist, Francis Sydney Smythe, better known as Frank Smythe (1900-1949). He was an incredibly prolific and well respected mountaineer and adventurer of his era, traveling to exotic lands and climbing some of the highest peaks in some of the most inhospitable places around the world, including the Alps, Rocky Mountains, and the Himalayas, and he also wrote vast amounts of work on his adventures. In the 1930s his target was the then very enigmatic, mysterious Mt. Everest, which for many was so remote it might as well have been the face of the moon, and it was as he sought to conquer this treacherous beast of a mountain that he would allegedly have some very bizarre encounters.

1933 saw Smythe’s first attempt to climb Everest, and in June of that year he had managed to approach the summit, on the top of the world and at the time higher than anyone had ever climbed before. It was at this time when he was almost within reach of his goal, which beckoned to him yet remained unreachable, as it would for the next two decades, an inscrutable, evasive goal that would pull many to their deaths trying to achieve it. Looking upon that elusive summit Sythe would say:

It was only 1,000 feet above me, but an aeon of weariness separated me from it. Bastion on bastion and slab on slab, the rocks were piled in tremendous confusion, their light-yellow edges ghostlike against the deep-blue sky. From the crest, a white plume of mist flowed silently away. Those who have failed on Everest are unanimous in one thing: the relief of not having to go on. The last 1,000 feet of Everest are not for mere flesh and blood.

It was on this excursion that he would have his brushes with what could be called the paranormal. As he made his way alone up the frigid, wind scorched mountainside he would claim that he had felt as if someone were following him, watching him. This presence haunted him for quite sometime before he was able to make out against that vast sea of white the form of a person out there with him on that slope, standing amongst the snow and rock. This mysterious figure would approach to walk there alongside him, and Smythe would later explain that he seemed t be very real indeed. He was so real, in fact, that the mountaineer felt obligated to break off a piece of Kendal mint cake he kept in his pocket to offer to his unexpected companion. The figure then disappeared into thin air to leave the bewildered Smythe alone once again, and he would say “so near and so strong did this presence seem, that it was almost a shock to find no one to whom to give it.” The mountaineer would later write of this experience in his book Camp Six, and he never would be able to explain what he had experienced.

The strangeness would only continue on that same expedition. Defeated in his goal of mounting the actual summit, Smythe was on his way back down the harrowing terrain on his way too camp when he allegedly witnessed something very peculiar in the sky above. There moving about in the clear blue expanse were two odd objects that seemed at first almost like kites, but which pulsated and moving in odd ways. He at first tried to ignore them as he got his bearings straight and clear his head, but when he looked back to that spot the things were still there. As he looked on wondering what to make of it all, a mist apparently congealed out of nowhere to envelope them, and when it cleared they were gone. He would write of this strange sighting:

I was still some 200 feet above C6 and a considerable distance horizontally from it when, chancing to glance in the direction of the north ridge, I saw two curious looking objects floating in the sky. They strongly resembled kite balloons in shape, but one possessed what appeared to be squat underdeveloped wings, and the other a protuberance suggestive of a beak. They hovered motionless but seemed slowly to pulsate, a pulsation much slower than my own heart-beats, which is of interest supposing that it was an optical illusion. The two objects were very dark in colour and were silhouetted sharply against the sky, or possibly a background of cloud.

So interested was I that I stopped to observe them. My brain appeared to be working normally and I deliberately put myself through a series of tests. First of all I glanced away. The objects did not follow my vision but they were still there when I looked back again. Then I looked away again and this time identified by name a number of peaks, valleys and glaciers by way of a mental test. But when I looked back again, the objects confronted me. At this I gave them up as a bad job, but just as I was starting to move again a mist suddenly drifted across. Gradually they disappeared behind it; and when a minute or two later it had drifted clear, exposing the whole of the north ridge once more, they had vanished as mysteriously as they came.

What were these surreal objects? Were they UFOs, mysterious creatures, pure hallucination, something else? Did they have anything to do with that phantom figure he had encountered earlier? Who knows? Smythe would launch two other expeditions to Mt. Everest in the 1930s, but he never did get higher than he did on that first, and he never had any experiences quite as inexplicable either, nor would he never again until his death in 1949. Yet these accounts sit there amongst his journals and writings, evading any easy answers. 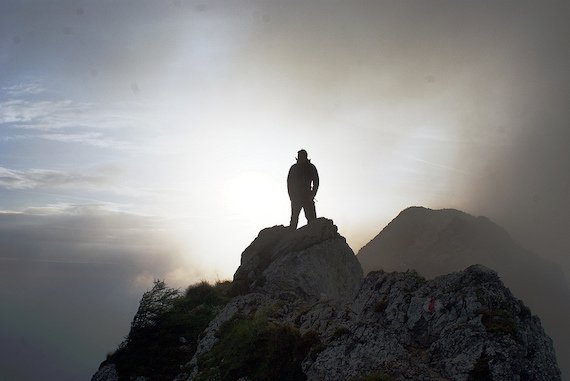 There has been a it of speculation as to what he might have encountered out there. Perhaps the most popular theory is that he was experiencing what is sometimes called “The Third Man,” which is a sort of ghostly presence that has been reported by many other explorers, usually in times of crisis. There have been other Everest explorers who have encountered something very similar, such as mountaineer Nick Estcourt, who in 1975 was climbing in approximately the same area where Smythe had had his own experience. Estcourt would explain:

I set off on my own at about 3.30 in the morning (from Camp IV) pulling up the fixed ropes leading up to Camp 5. It was a moonlit night and the shapes of the rocks were etched clearly against the brightness of the snow. I was about two hundred feet above the camp when I turned around. I can't remember why but perhaps I had a feeling that someone was following me. Anyway I turned around and saw this figure behind me. He looked like an ordinary climber, far enough behind, so that I could not feel him moving up the fixed rope, but not all that far below. I could see his arms and legs and assumed that it was someone trying to catch me up. I stopped and waited for him.

He then seemed to stop or to be moving very, very slowly, he made no effort to signal or wave - I shouted down, but got no reply and so in the end I thought, 'Sod it, I might as well press on!' I carried on and turned round three or four times ___ and this figure was still behind me. It was definitely a human figure with arms and legs and at one stage I can remember seeing him behind a slight undulation in the slope, from the waist upwards as you would expect with the lower part of his body hidden in the slight dip. I turned again as I reached the old site of Camp 4 (six hundred above Camp IV in the current expedition) and there was no one there at all. It seemed very eerie. I wasn't sure if anyone had fallen off or what. He couldn't possibly have had time to have turned back and drop down the ropes out of sight, since I could see almost all the way back to Camp 4. The whole thing seemed very peculiar.

This seems very similar to what Smythe encountered, and is a good example of this particular phenomenon. Many other explorers have experienced the same thing, and it has been proposed that it could be anything from ghosts, to guardian angels, to the simple effect of stress, physical duress, and oxygen deprivation leading to hallucinations. The same could be said of the strange objects in the sky that Smythe claimed to have witnessed. How can we explain what this seasoned explorer saw? Was this all illusion and hallucination, or something more? It only adds to the vast number of accounts of people venturing to the ends of the earth and coming back with mysteries, ones which perhaps may be best left to the remote wildernesses from which they sprang.

The Legend Of The Naked Freezing Ghost Of New Orleans