A Dark History and The Mysterious Haunted School of Nightmares

There is perhaps no scarier place than a haunted insane asylum. These places are imbued with a sense of sad history and suffering that make them perfect breeding grounds for tales of the supernatural, their dark halls supposedly prowled by the restless damned. One case of such a place is a former school for the mentally handicapped in Staten Island, New York. Here is a place with a tragic past of unbearable cruelty and death, which has managed to go on to become one of the most allegedly haunted places in the state.

Although the name sounds quaint and peaceful, what was once known as The Willowbrook State School is anything but, wreathed with a long and dark history of suffering, sickness, and death. Originally opened in 1947 by the New York State Department of Mental Hygiene, after having been used as an Army hospital for some years, known as Halloren General Hospital, Willowbrook was ostensibly a school for mentally handicapped children, but it was mostly to keep what were seen as irredeemable undesirables away from normal society, deemed “mentally and physically defective and feeble minded, who never can become members of society." Indeed, there was mostly contempt shown towards their charges by the staff from the very beginning, with dark clouds already brewing. Although there were only 20 students at first, by 1962 the place was overflowing with patients, an estimated 6,000 stuffed into a facility built for an absolute maximum of 4,000, and the living conditions certainly reflected that. Many of these children lived in absolute squalor, underfed, abused, treated like animals by the staff and doctors there, with the horrific conditions contributing to a massive hepatitis outbreak and a measles epidemic that killed dozens, but most sinister of all were the gruesome experiments carried out here.

Like something out of a macabre horror movie, two professors/ mad scientists, a Dr. Saul Krugman from NYU and Dr. Robert McCollum from Yale, would from 1963 to 1966 carry out a series of experiments to test the effects of hepatitis on the human body and how it spread, finding a perfect collection of unwilling participants at Willowbrook. The study basically involved force feeding the unknowing children the hepatitis virus and sitting back to see what would happen, the reasoning being that these kids were thought to be bound to get hepatitis anyway, so why not observe it in a controlled environment where the horror show could be observed? The results were horrific, with many of these poor children dying in the process, but since Krugman was a respected doctor who was instrumental to creating vaccines for rubella, the measles, and later hepatitis, and the subjects were nobodies who had long been forgotten by the outside world no one really paid much attention to what was going on here.

The first inkling that something was very wrong with Willowbrook and that there was a sadistic pulse underneath was when then New York Senator Robert F. Kennedy toured the facility in 1965 and was apparently appalled by the living conditions, describing patients living in filth and running around naked through the halls, living “in rooms less comfortable and cheerful than the cages in which we put animals in a zoo.” He was so shocked by what he had seen that he put into effect immediate funding towards the “school” to help conditions, and said of his excursion into a living nightmare, “I’ve visited the state institutions for the mentally retarded, and I think particularly at Willowbrook, we have a situation that borders on a snake pit.” Yet this did little to help the situation and it remained mostly a hell on earth for any one doomed to languish there. No one really seemed to grasp the full gravity of the situation, and things continued at Willowbrook as they always had for many more years.

It would not be until 1972 that Willowbrook would be put on the map for the average citizen again, when the then unknown reporter Geraldo Rivera launched a covert investigation into the facility. Finding an inside person to help him, Rivera managed to sneak in with a camera man and document the horrors that were going on behind closed doors, finding children dressed in rags huddled into overstuffed rooms and wallowing unsupervised in urine and feces, and they uncovered numerous stories of rampant physical and sexual abuse carried out by the overworked staff. His report on the matter, titled Willowbrook: The Last Disgrace, would create widespread public outrage and calls to close the school down, but it still continued to operate for several more years in spite of this, with the only real change being its name becoming the Staten Island Developmental Center in 1974. Despite lawsuits and mass outrage, the nightmare continued on for those within as it always had.

The former Willowbrook would not finally shut its doors until 1987, but in that very same year there would be one final atrocity, when a former employee at Willowbrook by the name of Andre Rand viciously murdered a young girl with Down’s Syndrome, Jennifer Schweiger, and unceremoniously buried her on the facility’s grounds. The horrific incident would later be covered in the 2009 documentary Cropsey, and served to add one more layer of suffering and death to this forsaken place of broken lives and shattered dreams. Many of those who had been locked away here and survived would be haunted for the rest of their lives by what they had experienced, and just about the only thing good to come from any of this were the massive changes in state legislation towards the treatment of the mentally handicapped, including the the Protection and Advocacy System of the Developmental Disabilities Assistance and the Bill of Rights Act, the Education For All Handicapped Children Act, and the Civil Rights of Institutionalized Persons Act. Portions of the land on which Willowbrook sat would turn over to the state and become a new campus for the College of Staten Island, opened in 1993, and the rest houses the New York State Institute for Basic Research in Developmental Disabilities and the Staten Island Developmental Disabilities Service Office. The remaining standing buildings have become weed choked ruins, and yes, it is all supposedly quite haunted.

Not long after the school was closed there were already stories going around that the abandoned facility was haunted, with reports of mysterious shouts or wailing from here, as well as abundant shadowy figures skulking about. When the college opened here there were almost immediately reports from students and staff of all manner of paranormal phenomena, including anomalous noises, apparitions, and even a ghostly gnome running around. Reports of the sense of being watched or followed are numerous, and there have been claims that entities have been picked up on campus security cameras as well. It has all become a pervasive local legend, and one former student at the college has explained of some of the phenomena:

Having went to College of Staten Island I can say that at night walking to your car you did sometimes get the creepy feeling of something watching and following you. Growing up on Staten Island everyone always heard the stories of satanists chasing and killing people in the woods surrounding Willowbrook. I have also heard stories of people being pushed, yelled at and shadowy figures chasing people from the buildings.  A story told to me was of a dark figure following someone to their house, and the person watched it from their window as the thing stood in front of their home till the sun came up. I personally believe many of the stories and feelings that came from this area can be attributed to the child killings of Andre Rand and the fear that sometimes monsters really do exist.  As for the stories of people being yelled at in the darkness or chased from the abandoned buildings that can probably be attributed to crazy homeless people. 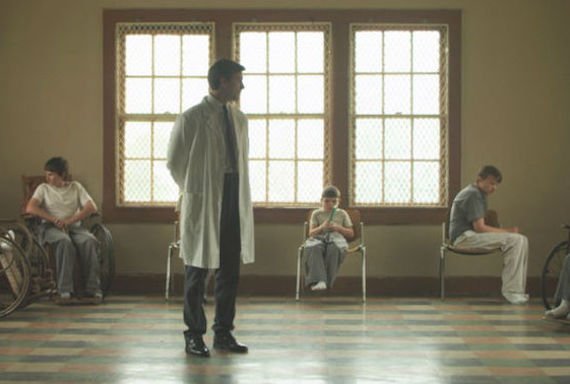 There are countless reports and claims like this. Another witness is an employee at the developmental center on the grounds by the name of Jennifer Vinciguerra, who has experienced all manner of strange things in the vicinity. She has told The Shadowlands of the various encounters with the weird made by both her and her co-workers:

I work in Building 15 of this Developmental Center. I am a social worker with this population. I work a lot of late nights and I'm here alone most of the time. I have spoken with a few of my co-workers and we have all had similar experiences:  There are often footsteps passing our office doors, and we are clearly the only people in the building.  Toilets flush by themselves when we are in the bathroom alone, I have heard my name called but there was no one there when I went to go see who it was.  I've heard children's laughter through the vents.  (We are not attached to any other building) A co-worker of mine saw 2 children in old fashioned clothing run down the hallway.. she went after them, turned the corridor corner and there was a locked door, but no children.  The scariest encounter I have had occurred only last week. And it happens often to me.  I often hear a man scream.. as if in excruciating pain.. in the distance.  It sounds as if it's through the walls. I thought I was nuts at first until my co-worker's son came running out of one of the offices last week and asked his mother who was screaming. She's heard it too on separate occasions. Another interesting point... The College of Staten Island (new campus), is right next door and was once part of Willowbrook State School. The building with the haunted radio tower is actually state property.  I'm not surprised at all to hear that it's haunted.

Considering the long history of depraved acts, suffering, and death that permeate these walls, it is perhaps no surprise that the abandoned Willowbrook and its surroundings should be haunted. After all, it is these places stained with such things that typically draw these phenomena to them. Are the ghosts of these poor souls trapped here, tethered to this place of madness and grief? Or is this simply urban legends and scary stories wrapped around an undeniably creepy place? Whatever the case may be, the long abandoned Willowbrook State School has a chilling past and remains definitely the spookiest of places, haunted or not.