A Frightening Demonic Haunting in Wales

In 2015 a quiet home in a residential district of New Tredegar, South Wales, became ground zero for a terrifying series of supernatural events revolving around a Tracey and Keiron Fry and their three children. According to them, the phenomena started shortly after an evening jokingly playing with a Ouija board the previous Halloween, after which they began to spot a “a small child clad in white with a blue face and tail” around their home. This apparition was at first just fleetingly spotted, almost able to be written off as the imagination playing tricks, but then there was various poltergeist activity that began to torment the family, and this would quickly escalate into a terrifying demonic ordeal.

At first it was rather innocuous, with objects moving on their own or things misplaced, but this would quickly escalate to the more sinister, when Tracey Fry began waking up in the morning covered in inexplicable scratches and bruises. No one could figure out where these injuries were coming from, and in many cases they were in places on her body which she would not have been able to reach on her own. After several nights of this they would call a local vicar, Johnathan Widdess, who after examining the injuries and the residence came to the conclusion that they were possibly under attack by a demon, and did a makeshift exorcism on the place. Keiron Fry would say in an interview with The Mirror:

We are being molested by demons. My wife goes to bed fine, doesn’t feel anything in the night but when she wakes up she’s in agony. 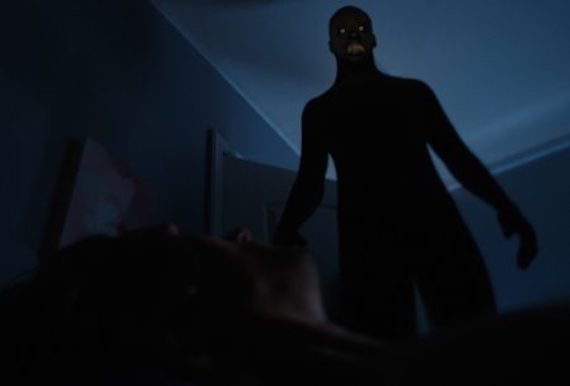 His wife, Tracey concurred with this, explaining how the attacks seemed to get worse the more scared they got, and she says of these attacks:

It's getting worse and worse and there's nothing we can do. I wake up every morning in agony because of the demon. My husband rubs cream into my bruised back every day but the pain doesn't go away. It has affected our marriage because we have been rowing and fighting all the time about the demon. It has been feeding off all the negative energy.

The exorcism seems to have not done any good, because the poltergeist activity and attacks continued unabated, and it is possible that the priest’s presence only angered the entity, as it then began to allegedly threaten the family’s children. According to the couple, the demon began to appear to the kids at night to whisper from the shadows that it was going to slit the throats of their parents. During this time, Keiron even claimed to have captured photographic evidence of the demon, which creepily appears as an almost doll-like child dressed in white, and it was all intense enough for them to once again reach out to a professional. They found one with paranormal investigator and psychic Robert Amour.

The investigator arrived and supposedly immediately could “sense the evilness of the place.” Armour would confirm that the presence was caused by a demon, and not just one demon, but three. According to him, there were two smaller ones helping a larger and more powerful one do its grim work, helping to hold down the mother while it attacked her. He also came to the conclusion that this was an “incubus demon,” which is a type of male spirit that feeds off of sexual energy and typically targets women, and Tracey has said of this:

We were told by the paranormal investigator that we have an incubus demon - the worst type of demon you can get. He told us we have three demons in total, the other two helped the main demon pin me down.

Armour then got to work cleansing the house, and even claimed to have “slain” the two smaller demons. He also apparently told the family that the presence was most pronounced in the upstairs rooms, although it seems as if he never was able to get rid of the third, most potent demon, and it is unclear what has become of it. The whole story made heavy rounds in British tabloids all over, with many people picking apart the photograph of the demon as being a possible hoax, and of course there are plenty of skeptics. One article on Doubtful News minces no words when it says of the photo and the story:

This story smacks of absurdity – just shoving in all paranormal-related keywords and details to get attention. The so-called details are a collection of paranormal tropes. Yeah, that’s (the photo) the ghost. Presumably the same one beating her up. The man is unemployed but paid to have paranormal “experts” come in! This story is incoherent. It sure does seem that this family is affected by something but it’s not paranormal! They appear to be fully invested in their belief and are making their situation into a colorful drama. What is a REAL shame is how their kids are dragged into this nonsense.

Maybe it is absurd, maybe not. It is difficult to know what to make of this case, and the fact that it was mostly covered in tabloids definitely raises some red flags. There is also the fact that there has been very little evidence offered up to corroborate it all, except that one photograph, which let's face it is not very conclusive and looks as if it could just be a freaky doll. There are, however, many such cases of purported demonic hauntings out there, so who knows? Real or not, it is a curious case, and joins the ranks of many others like it.

Predictions: These Are the Disease Experts, Intelligence Groups, and Tech Insiders That Saw a Pandemic Coming