Hiking out in the wilds of Kyushu’s Fukuoka Prefecture, in Japan, one might be enchanted by the vast expanses of unspoiled, mountainous wilderness here. One might be lulled into thinking that this is a quaint and peaceful pocket away from Japan’s bustling metropolises, and that would not be wrong. However, as you hike along you might come to a curious tunnel cutting through Inunaki Mountain, imposing and frightening with the darkness that lies within. If you are brave enough to make your way along this murky route, you may hear voices or wailing from the gloom, maybe even see shadow figures, and if you are able to run this gauntlet of strangeness you will be deposited back out into the light of day, where you might find a little side path meandering off. Follow this and you will come to the sight of a curious crooked sign posted on a tree ahead, which has scrawled upon it the words, “Japanese regulations and constitutions do not apply here,” beyond which you will see an abandoned ghost town of an old Edo era village, and if you are lucky you might just return to tell the tale. Welcome to the legendary Inunaki Village, where strange tales, spooky phenomena, and mysterious vanishings are the order of the day, and from where you will be lucky to make it out alive.

The immediate area itself is already the home of spooky paranormal tales, revolving around the Inunaki Toge Tunnel, also called the Old Inunaki Tunnel, which happens to have been the scene of a mass cave-in that killed dozens of construction workers as it was being built. It is also purportedly prowled by the spirit of a man who died here in 1988 after a group of thugs tried to burn him alive. The victim is said to have escaped into the tunnel even as the flames consumed him, eventually dying right in the middle of the tunnel after committing suicide to end the excruciating pain of his ordeal. The perpetrators never faced justice, and ever since then, motorists have reported an apparition appearing besides their car, and unexplained brake failure is also frequently reported from here. There is also supposedly the spirit of a woman who was murdered here and the now abandoned tunnel has been considered one of the most haunted in Japan for quite some time. The nearby Inunaki Ridge also has a reputation as a most haunted spot, full of ghostly screams and wails that permeate the air at night. This is all very eerie, but it is perhaps even more interesting in how it pertains to the old legend of the cursed Inunaki Village. 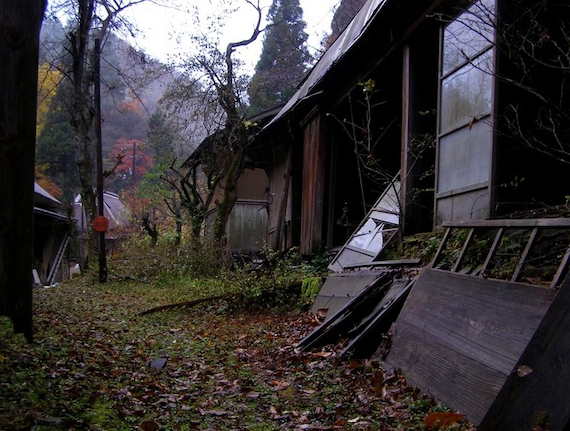 It is said that if one can make it through this tunnel there will be a trail that leads off into the wilderness, and it is along this feral, overgrown trail that one can find the hidden village, which does not exist on any map. It is supposedly very small, well-hidden, choked by wilderness, and easy to miss, even by some accounts only revealing itself to certain individuals, and there is supposedly a dark history behind this place. The story goes that its inhabitants chose to close all ties with the outside world in the Edo period between 1603 and 1868, after which it became a sort of special preserve considered outside of the laws of the country. The villagers were said to be part of a strange cult, carrying out arcane rituals, and there are stories of madness and murder here, with death, incest, and cannibalism supposedly a common occurrence. One night a villager supposedly went insane and slaughtered 33 of his fellow villagers in a bloodbath, after which this forsaken place was struck from maps and left to rot. From here the weirdness begins.

According to the tales, the village still exists, populated by inbred survivors who have riddled the place with traps and will attack anyone who comes here with axes and sickles. Stories of hikers and explorers disappearing in the area are sometimes blamed on this legendary village, and it has its share of ghostly phenomena as well. Electronic devices supposedly won’t work here, and there are said to be phantom hounds that prowl the wilds and a ghost who wields a sickle shambling about. There is all manner of talk of inter-dimensional portals, bouts of lost time, and demons conjured up by the villagers, and it is all very scary and pervasive as a Japanese urban legend, finding its way online where it is discussed by many commenters claiming to have found it, but is there any truth to all of this? Is there some reclusive village out in the mountains beyond Japanese law and populated by madmen, ghosts, demons, and maybe worse?

As a matter of fact, there is indeed a village called Inunaki, but it seems to actually be separate from this legend. The real Inunaki village was once a major coal mining town working for the Kuroda clan until much of it was devastated by a flood in 1889, after which it was largely either abandoned or absorbed by neighboring villages, to the point that is does not really exist anymore as anything other than a memory. It was indeed a real place, but not the one that people speak of in legends of the area. One of the ideas is that this is all based on a creepypasta type story that started making the rounds in 1999, when a poster on a Japanese message board told of having found this mysterious village out in the middle of nowhere, of seeing the sign announcing its existence outside of law, and being attacked by maniacal villagers, before ending his post with a plea for someone to go check it all out. You can see the original post here, the 4th comment down, although it is all in Japanese. It is all very unsettling, but very difficult to verify in any way. 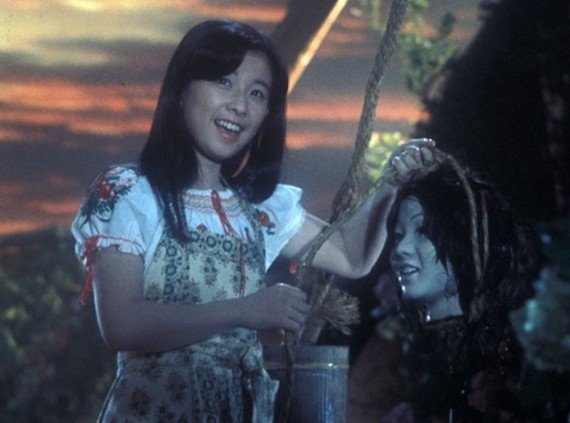 While over the years this cursed village would gain momentum in similar forums and draw in people with all sorts of strange stories to tell about it, it seems that it all more or less comes back to this one original post. This definitely gives it the feel of an Internet urban legend in the making, and also raising a red flag is that much of the story of this lost Inunaki village can be seen in a series of J-Horror video game called Siren and Forbidden Siren. The games feature a village called Hanuda, which bears many of the hallmarks of the mystical Inunaki village. Hanuda is also a hidden village in the mountains, full of villagers that follow some bizarre cult and it is also the site of a massacre that killed 33 people. Here there are abandoned houses filled with bloodstained clothing, and it is a place that lies between dimensions and which can cause someone to vanish without a trace. The games really went all in with it, with numerous fake viral marketing sites that present it as all very real, complete with photographs, which actually happen to be of a totally different creepy village near Tokyo, and they even ask for any further information regarding it.

It is all presented in a very believable fashion that might trick some casual readers that it is indeed a real place, but it is all just a viral marketing. It certainly seems that this could have been the inspiration for the story of Inunaki Village, although there have been plenty of people who say it is the other way around, and that the games are based on the real place. Who knows? Yet, this makes it all the more unlikely that such a village exists, as does the complete lack of evidence that this accursed place is really where it is said to be. Japan has no shortage of creepy abandoned villages and shrines, but so far there are none that have been found riddled with traps and prowled by demons and raving mad villagers. Is there really a hidden village out in the mountains of Japan, full of sinister forces and sequestered away in its own realm of evil? Probably not. But it is certainly a wild story all the same, and one might want to be wary if ever venturing through the area. Just in case.

Stuck at Home? Use These Webcams to Hunt for UFOs, Bigfoot, Ghosts and Monsters